Other Lenses, Other Worlds 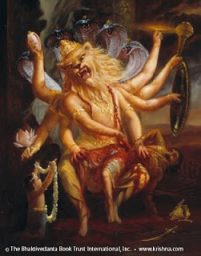 Almost certainly not what C.S. Lewis had in mind – but an amazing image! What would the conflict between Aslan and Tash look like if Lewis had had this on his desk? (Image of Narasinha, avatar of Vishnu, slaying Hiranyakashipu from krishna.com)

The greatest argument for reading much and reading widely is the chance to see sides of things that were invisible to the authors – if only by virtue of having a completely different perspective.[1]

An excellent example of this is this article by Vishwas R. Gaitonde on viewing Narnia through a Hindu lens.

Gaitonde takes us on a tour of the Narnia Chronicles, pointing out places where some of the ideas of Hinduism[2]  can be seen resonating with the text.

At first blush, this seems surprising – didn’t Lewis write the Narnia Chronicles as a kind of Christian allegory?[3] Certainly, given Lewis’s reputation as an apologist this would seem to be the obvious assumption.

However, the story may be more complicated, and in this case at least it’s possible that the fresh, invisible perspectives that Mr. Gaitonde sees through a Hindu lens may not be entirely unintended by Lewis.

Lewis wasn’t always an ardent apologist.  Raised in the Church of Ireland, he lost his religion in middle school and for years afterwards seems to have been an unsatisfied atheist.  Not, of course, that atheism is fundamentally unsatisfying[4] – it’s just that he seems to have spent rather a lot of time searching for something to fill the void that was left when he turned away from his church.  Indeed, biographies of Lewis note that he initially “renounced his faith” to explore mythology and paganism, and it seems that he didn’t really become what we would call an atheist today[5] until he had suffered through the trials of the Great War.[6]

More, on his return to Oxford and completion of his studies (which had been interrupted by military service) Lewis may ultimately have found himself on the English faculty[7] but he also lectured for a time in Philosophy – and it may be that he was still “seeking” at this time, because he seems to have continued questioning and suffering until his rather sudden and painful reconversion in the late 1920s, first to a kind of theism and then finally back to the Church of England.[8]

Now here’s the thing: By the time he published The Lion, The Witch and the Wardrobe in 1950, Lewis had established himself as a well-known apologist and firmly created the public image of a Christian.  But Lewis was also a scholar of literature – particularly mythologies – in an era when Europe was developing a keen interest in Eastern religions.  Combine this with his interest in the occult, paganism, and Celtic revival and the pan-Indo-European theories that informed various kinds of pagan and Celtic reconstructionism of the era certainly crossed his path – and surely also the “reconstruction by analogy” ideas did as well, drawing on the sophisticated polytheisms of the East to build an idea of what Celtic and Norse mysticisms may have been like.

Now, from Lewis’s own writing we get the sense that he really didn’t respect Hinduism (or, indeed, any non-Christian religion), particularly if we start our look at his ideas with his essay “Christian Apologetics” in which he neatly dismisses several world religions as merely heresies of one another, and in the space of a paragraph refutes Hinduism’s claim on being a “true religion”.  Looking into his work in Narnia, one also gets the sense from his treatment of Tash that perhaps he dismisses the gods of other religions as irrelevant.

But we must remember: Lewis was a convert – that he had REconverted back to Christianity may not be relevant: converts are, after all, notoriously strident in their views.  Sadly, there seem to be none of Lewis’s writings prior to his conversion that have survived without at the very least being edited by the author himself – as such, it’s hard to see what understanding of world religions he may have had.  Certainly, his comments on non-Christian faiths in later writing, while not mean-spirited, do seem to indicate a lack of deep understanding.

However, there is that early period of searching, and there is his writing in The Abolition of Man which seems to reflect a rather broad knowledge – and in particular, Hinduism is mentioned.

Moreover, there is the fact that his student and lifelong friend, Alan Griffiths converted to Catholicism in the same year Lewis returned to Anglicanism, taking the monastic name Bede and eventually becoming known for his involvement in the Christian ashram movement in India, where he blended Hindu (mainly yogic) mysticism with Christianity in his evangelism.

Griffiths in fact began his study of yoga and the Vedas in the late 40s and it seems likely that he and Lewis discussed – and probably corresponded – on the subject, given both their deep interests in religion and Christian apologia.

I can’t know what went through Lewis’s mind as he wrote the Narnia Chronicles, of course – at least not beyond what he himself has told us in his own autobiographical writing.  But it seems unlikely to me that he was unaware of some of the basic ideas of Hinduism (and other religions) and the nature of his personal quest for spiritual fulfillment, his two years as a theist, all this suggests that in his personal thoughts at least he likely saw much universal truth in the world’s great religions.  Given his personal history and the times in which he lived, it would have been a common thing to assume that these universal truths (things like “do unto others…” and love/peace as a fundamental moral goal) issued from a common source: the God of Abraham – and that those other religions that echoed the tenets of Christianity were “unfortunately” confused as to the “truth.”

This is speculation, of course, but – given this as an assumption – is it so far-fetched to think he may have drawn on his own knowledge of other religions in his creation of a fantastic world in which his own Savior might have manifested in another form?  Certainly, this idea – the idea of “the lamb” who, in Narnia at least, manifests as “the lion” (as explained by Aslan himself in Voyage of the Dawn Treader), and presumably manifests in other ways in other worlds (there being a multitude, as we learn in The Magician’s Nephew … though it’s not at all clear that Aslan is present in all of them) seems to be a nod to the idea of Hindu avatars.

Despite Lewis’s deep Christian convictions through the latter half of his life, and the fact he held these ideas at the time he wrote the Narnia Chronicles, I personally find it difficult to ascribe all the echoes of other world religions in his works to accident.  It’s possible he didn’t deliberately craft his writing to include them, but I feel certain that his interest in mythology and fairy stories would have planted the seeds in his mind, and that he would certainly have drawn on symbols and imagery that corresponded to his own understanding of Christianity.

So yes, there are other lenses through which we can read these works, and I can certainly see the interesting ways in which Mr. Gaitonde found to read the Narnia Chronicles through Hindu eyes.

But these books aren’t so much a set of Christian stories as a set of mystical stories – and in the 20th Century, where better for a British scholar in 1950 to find mysticism than in India?

[1] I don’t actually hold to the “death of the author” theory of reading, but I do think it’s blindingly obvious that readers can bring their own perspectives to works, and that this perspective can lead to their own thoughts and images.

[2] Assuming Hinduism to be a homogeneous entity, of course, which isn’t really the case.

[3] No, actually – Lewis himself said in On Stories: And Other Essays on Literature:

“Some people seem to think that I began by asking myself how I could say something about Christianity to children; then fixed on the fairy tale as an instrument; then collected information about child psychology and decided what age group I’d write for; then drew up a list of basic Christian truths and hammered out ‘allegories’ to embody them.  This is all pure moonshine.  I couldn’t write in that way.” (p46 in my 1982 Harcourt edition – near the beginning of the essay “Sometimes fairy stories may say best what’s to be said”

[4] Though to head off the inevitable argument: I suppose the example of Socrates shows it can cause bitterness – perhaps not always in the atheists themselves.

[5] At the time Lewis proclaimed himself atheist, in England at least the term might just as well have meant “non-Christian” – as indeed it does in some parts of the world today.

[6] Lewis was not only injured in combat, but lost a close friend during the war – a friend close enough that he seems to have made a promise to make sure his friend’s mother was taken care of, and in fact eventually the two lived together despite the 20-some year difference in their ages.  There has been speculation that they were lovers (of course – such speculation always occurs when a man has a particularly intimate relationship with a woman) but Lewis consistently refers to her in correspondence and other writings as his “mother,” which makes me think it may simply have been a very close emotional and intellectual relationship.

[7] Lewis had developed a strong interest in mythology, particularly Northern European mythology such as the Icelandic Eddas, and was apparently involved in the Celtic revivalist movement – a natural fit for a transplanted Irish scholar, and excellent qualifications for his installment in the new Medieval and Renaissance Literature faculty at Magdalene College.

[8] Much to the rather famous chagrin of his friend and fellow Inkling J.R.R. Tolkien, who had hoped he would become Catholic. Lewis turned to Theism in 1929, then (the story goes) committed to Christianity again after a midnight walk and discussion with Tolkien and Hugo Dyson.