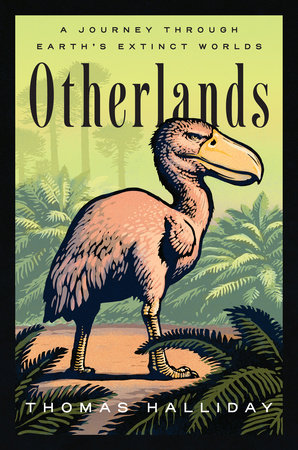 I like to read books on paleontology. I used to read Peter Ward’s books a couple decades back. Bakker’s The Dinosaur Heresies and Adrian Desmond’s The Hot-Blooded Dinosaurs are on my shelves. One recent book that is garnering attention is Thomas Halliday’s Otherlands. The book was released on February 1, 2022 from Random House.

The book is divided into sixteen chapters in 416 pages (6 1/8 x 9 ¼ inches). Halliday works his way backwards starting with the Mammoth Steppe in Alaska at the end of the Pleistocene. Each chapter is a different epoch or period with a specific setting.

He will discuss the setting: plants, animals, temperatures, changes. I learned a few things. For example, I did not realize the Mammoth Steppe was dependent on grasses and that the current polar regions with permafrost is mostly moss. Caribou and Musk Ox can survive on that, Mammoths and horses cannot.

My interest is more with the Cenozoic, especially with the Paleocene and Eocene. His Eocene chapter is set on an island that is now part of that peninsula on Antarctica that sticks out towards South America. Halliday builds on biologic concepts like island dwarfism and giantism in each chapter. He had an earlier chapter set in an isolated plateau in the Miocene in what would become Italy surrounded by a desolate salt desert that would become the Mediterranean Sea. The Eocene chapter goes into the seasonal extremes that mammals either had to be big for the cold or small in order to hibernate, but no intermediate sized mammals.

The Paleocene: 66 to 56 million years ago. The asteroid or comet hits the Yucatan and releases a holocaust on Earth. What was it like those years following the cataclysm? Dinosaurs did not make it through, other creatures did but often barely. He goes into the swampy, humid landscape of the Paleocene that was taking millions of years to recover from the asteroid impact. Fungi flourished on all the dead trees, then you had what is known as the “fern spike.” Finally, speciation of new trees as time went by. He describes some of the small mammals that we really don’t know how they fit in with today’s animals.

He has chapters on the Cretaceous, Jurassic, and Triassic periods. Then onto the Paleozoic which becomes ever more alien with each jump back in time. The Permian period with one big continent, Gondwana, with its extremes of climate with deserts and cold regions and its massive extinction event.

The Carboniferous period to me is the last one that has some relation to our time. The Ordovician, Devonian, and Silurian periods are ever more remote to the point the the air is different.

Halliday writes in a way for the public to grasp. I don’t understand why it took two different people five weeks to read it. I knocked it off in eight days. If you have read Tim Flannery’s The Eternal Frontier, this should appeal to you. This sort of book makes for a nice diversion from my fiction reading.