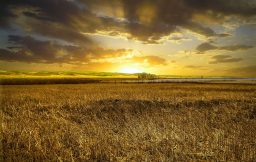 [Part 1] Flowers were invented towards the end of the dinosaur’s reign, then grass, that uncanny, flowering plant.

The Autumn of Life

Around the time the dinosaurs left us, or maybe sometime after, the Earth began to get colder. There was a brief Indian Summer of an Eocene High, followed by the Azolla Event perhaps 50 million years ago. In that event, a floating super-plant either covered the beaches around the Arctic Ocean, or even covered the entire ocean itself, for thousands of years. As the Azolla plants died, they sank to the bottom. The meters-thick, carbon-rich sediments that they left spread across the floor of the Arctic Ocean are thought to be the last of the great carbon deposits on Earth.

The Azolla died off in the Arctic, never to return. As the Earth continued to cool, ice began to appear in Antarctica, the first frost of the approaching Winter. During and after the Azolla Event, the carbon dioxide concentration in the air dropped, as if the Arctic super-plants were using it up. But the Carbon didn’t recover the previous level after the super-plants were gone. Instead, the lower level persisted, with plenty of oscillations, and with the caveat again that our reading of the ancient records is spotty and prone to error.

In the earlier stories, new life spread out across the surface, there to ascend into the space above. But patterns are made and patterns can be broken and this pattern was broken in the instant case. Forests that once spanned the continents and reached for the sky were destroyed, burned down and replaced with grasslands and deserts. There had always been forest fires for as long as trees had existed, but this time there was something different. Before, when the trees burned down new trees would grow back up. This time the trees never returned.

The destroying took place in stages over many thousands of years. It started as a patchwork, or mosaic, of forest and grassland, then the grassy areas expanded and the forested land decreased. Eventually, and not that long ago, vast interior regions became entirely grasslands, scrub lands, and desert- the Great Plains, the Savannah, the Steppes, the Outback.

Sometime in this period, after the dinosaurs but long before the Ice Ages, two new kinds of green photosynthesis came around somehow, a story you’ve heard before. Up until a few million years ago, all green, oxygenic plants were of a single kind, called “C3 photosynthesis”, the kind that was invented back in the Spring of Life. Two new types are introduced in the Autumn of Life, called “CAM” and “C4” photosynthesis. These are both more adept at conserving water in arid conditions and at vacuuming up aerial CO2. CAM plays a lesser role in the world, found in succulents like pineapple and in desert plants.

C4-style photosynthesis became a popular choice for the grasses and sedges in the new grass lands, but not all at once. As before, there was a long period of ’gestation’, as it were. Then, something like five million years ago, this type of grass became much more prevalent. As before, C4 photosynthesis did not arise in a single common ancestor and radiate out in a “Tree of Life”, Darwinian fashion anymore than chloroplasts, mitochondria, eyes, or legs did. Instead, it appeared independently and nearly simultaneously in a wide variety of plants all across the continents, as if the idea were plucked from the air. What’s more, of the many different kinds of plants that run this type of photosynthesis, most use the same basic ‘C4-architecture’, as if they had been granted non-exclusive licensing rights from the Patentholder.

Hi, I’m Paraceratherium, dropping in from 23 Ma. You can take me down when your dog can take down a pick-up truck.

Naturally enough, along with the new grasslands came the animals that like to eat the grass and the animals that like to eat the animals that like to eat the grass. There are limits to how big an animal can be, whether predator or prey. The most famous of these is the square-cube law, a static relation which limits the size of an animal in a gravitational field, for one important example. But there are dynamic limits as well. The bigger the animal, the more food it needs every day. The more food it needs, the further it has to travel from one food source to the next. The Blue Whale might be the epitome of this process; it has to sweep up huge volumes of water to filter out the krill. But it has an advantage over land animals- at low speeds it can move through the water very efficiently, almost without friction.

An herbivore has to walk across rough terrain from one plant to the next, which costs it energy for every step. It usually has to eat a bit from many different plants, and to be so kind as to leave enough so the plant can grow back. The distance it has to travel depends on the size of the plant it is eating, the amount of vegetation in its area. The size the plant can grow to depends on how fast it can grow between feedings. This adds up to a general rule: for a given rate of plant growth, the bigger the animal gets, the farther it has to walk for food. A reduction in plant growth rates, for whatever reason, will affect the bigger animal much sooner because it can’t walk too far for its food. With all else equal in a simplified example, if a 100 kg herbivore needs to move 10 km per day to get from one plant to the next, then a 1000 kg herbivore would need to move ten times as far, or 100 km per day. It also has to transport ten times as much mass over the extra distance, which takes ten times as much force. With energy as force times distance, the bigger animal would need 100 times as much food-energy to do that, not just ten times as much. Just from this simple physics, the bigger animal has to eat more of the vegetation in a given area. It will exceed the carrying capacity of the land sooner than the smaller animal will. This is another reason we know that the giant dinosaurs lived in a more abundant world.

Our field detectives, the ones who work the cold cases, have dug up some tantalizing leads. Back in the early days of the Oxygen Wars, the original atmosphere of the Earth was mostly nitrogen and carbon dioxide. It turns out that the CO2 content was something over ten percent of the total (>100,000 ppm), or maybe 250 times as much as today’s paltry 400 ppm. Yet the global temperatures weren’t that much different in the Spring of Life; there were even several extended Ice Ages back then that don’t bear on this story. From that ancient time, through the Summer of Life, and on to the Azolla Event, the atmospheric CO2 concentration had been falling on average, though with plenty of fluctuations. This reduction can’t account for the size of those mountains of limestone and the rest because the amount of carbon in the air, even at 100 percent, is far too little. What it does tell us is that the average replacement rate of carbon dioxide, spanning millions of years, has been just a bit lower than the consumption rate. Life had been just a bit too exuberant, too wasteful, starting from the very first carbon-bearing deposits laid down by the original anaerobic plant-things, through the spectacular Summer of Life, and on to the present day. 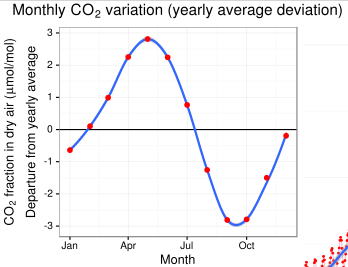 CO2 level changes over the course of a year way out on Hawaii, about 6 ppm. Higher in the Spring, lower in Autumn.

These CO2 sources, which may be mostly volcanoes and seeps, are intermittent and fluctuating. No one knows where it all comes from. Perhaps some of the mass extinctions of the distant past were caused, or exacerbated, by Carbon-starvation if the replacement rate temporarily dropped below the consumption rate.

The vegetation of the world, both on land and in the sea, acts like a tremendous, planetary-scale vacuum cleaner, sifting the carbon dioxide right out of the air. Each summer in the northern hemisphere, where most of the plants live, the global atmospheric CO2 level drops noticeably, by several ppm. It rises again in the winter, when the plants aren’t growing as fast, and some are decomposing. We can make a lot of hay from this fantastic fact:

1. The vacuum-nozzle effect. In order for the global carbon dioxide level to drop, the local CO2 level has to drop a lot more, just as a vacuum cleaner is most powerful right at the nozzle. The air around a growing plant is going to be carbon-starved and oxygen-enriched. Some of today’s farmers report that on summer days, when the air is still, the carbon dioxide concentration near the ground can drop to an unusable level by 10:00 AM. (!) It may be hard to believe that an ordinary plant can have such a voracious appetite, since it just sits there looking like a vegetable.

2. The annual drop, in total tonnage, not parts-per-million (ppm), must have been very much larger in the past, in the Summer of Life when the Earth was warmer and luxurious vegetation spanned the planet. Therefore, the CO2 concentration must have been much higher back then, otherwise the plants would have starved in late summer. This of course is supported by many other lines of inquiry.

3. A higher rate of photosynthesis would drop today’s CO2 summertime level down further than what we see. The faster the carbon is dropping out of the system, the faster it has to be replaced somehow. In the Summer of Life, that replacement rate had to have been far higher than it is today because the total rate of photosynthesis (land and sea) was far higher. Most of the replacement carbon comes from volcanoes and fissures on land and under the sea, so these must be much less active today than yesterday.

4. The more tonnage of Carbon in the annual cycle, the more of it that is precipitating out of the system and turning to stone. As the carbon dioxide level falls below the maximum concentration that the plants can use, the rate of growth of the plants will slow down. All of the herbivores will have to to expend more energy to go from one now-smaller plant to the next. All of the predators have to expend more energy to track down their prey.

We’ve identified a rather large and insidious gang of possible accomplices- photosynthetic plants, that is- for the impending mass murders, but we mustn’t be too harsh in our judgment. After all, they were just doing their job and they had families to feed too- not to mention all those lovely and innocent animals they so selflessly supported. With these mitigating circumstances in mind, we’ll need to investigate a little further before passing judgment. We’ll also have to consider the sentencing so as not to inflict undue punishment. Ideally, the punishment should fit the crime, and this was a most uncanny crime.