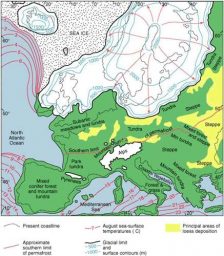 The Winter of Life

At the worst of the Ice Age, the Arctic of now was the Europe of then- ice to the North, then permafrost all the way south to the Alps, then tundra and steppe to the Mediterranean. The sea level was more than one hundred meters lower than today. The Solutreans were able to walk across, or skip along the edge of, the sea ice from Iberia to America more than 20,000 years ago, there to become the Clovis people. The North America they discovered was not much different from Europe; a massive sheet of ice covered half the continent.

Yet, at the same time, Siberia had no icecap, nor did most of Alaska. These places were temperate at the time, even though they are further north, a major mystery stashed under the rug somewhere- don’t bother asking Dr. PhD how that’s supposed to work. On this particular point, a pole shift, or a giant electric blanket, are just as good of stories as any. We know these regions were temperate because of, among many other things, the undigested flowers, leaves, and grasses found in the mouths of the frozen Mammoths. 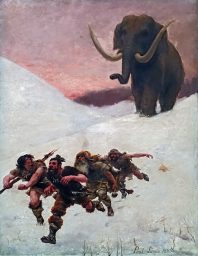 A group of awesome human hunters demonstrate the proper Sapien-guy form. Dr. Mammoth’s colleagues are just out of picture, to the left and to the right. Artist: Paul Jamin, 1885

The comet story is some part of the picture. The broken-up comet/asteroid (these are two names for the same thing, a Rock-That-Moves-Through-Plasma-Space) might have come in hyperbolic, at a low angle from the Southeast, ploughing into and vaporizing parts of the Canadian icecap, scouring the Canadian Shield. Part of the ensuing insta-muck was launched onto suborbital trajectories over the Arctic Ocean, to land on northern Alaska and Siberia. In this unauthorized version of the story, the Carolina Bays would be the precursors, with the similar features in Northern Siberia as chunkier pieces that overshot the space-muck. The atmospheric blast wave, then blast wind, attended the monster tsunami coming in from across the Arctic Ocean. These fluids carried the forces that uprooted, tore asunder, and finally entombed the millions of shredded trees and animals in the frozen muck. The volcanoes that lit up as a result could have plunged the northern world into darkness for some time, while the liquefied ice cap flooded all the coasts. A great deal of the lofted water would have ended up in the upper atmosphere, enough to provide heavy rain for, say, forty days and nights. Whatever did cause the mass destruction also instantly changed Siberia from a temperate climate to the subarctic climate of today, like turning out the lights.

Though the comet/asteroid story makes the grazing fly-by, it doesn’t quite land with the punch we are looking for. To be sure, something Terrible visited the North around the time of the major extinctions- maybe to wipe out much of the Clovis people in the process- but, in addition to the undesirable litany of iffys, maybes, and perhaps seeminglys, the Terrible didn’t visit South America, which suffered the worst losses. It also happened too quickly to account for the spread in the putative dates of the various extinctions, unless there were multiple hits coming in on similar hyperbolic trajectories over the centuries. That’s middling-plausible, since the Taurids always radiate from Taurus, but all the pairings of the orbital elements have to line up just so. The Terrible also destroyed all kinds of plants and animals that did not end up going extinct- the comet crept in through the window but the dog didn’t bark for them.

We want something even more terrible than an asteroid strike, that is worldwide, and that takes place over a period of centuries, hence the desire to blame climate or humans. We also don’t want to have to drag our tropey Space Brothers in to get ‘er done as part of their off-world mining operations- that’s so last ice age. 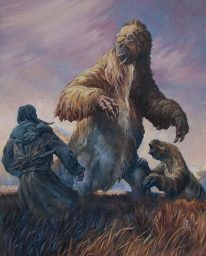 Dear Human Hunter:  Mama Giant Ground Sloth would like a word with you.

The human-hunting idea has what amounts to a military problem. Our ancient parents were as bands of Hobbits surrounded by armies of giant Orcs numbering in the hundreds of millions between their different kinds. A field marshal, reviewing his rag tag tribe of midgets armed with sticks and arrows, would have to weigh those facts against his enemy’s tooth and claw, tusk, armor, size, and troop strength. He would have to retire from the field, discretion being the better part of valor.

We saw this dynamic play out in North America in historical times. The Great Plains Indians could not subdue the immense herds of Bison that ranged across the prairie lands. Save the occasional Hobbit-Indian, these were prey almost without predators, the layovers of a devastated ecosystem. These wilding Pleistocene survivors could not be fenced, or tamed, or stopped. Bison Army Field Marshal Old Logan, Pennsylvania Division, was quite insistent on this point. Most instructive. On this point:

“… When they were gone the barn was still standing, but the fences, springhouse, and haystack were gone, as if swept away by a flood. Six cows, four calves, and thirty-five sheep lay crushed and dead among the ruins.”

The Indians couldn’t build cities because cities need farms, and farms would be plundered by the Million Bison Army. They had to move their teepees around, always being careful not to pick a place that was too lush, too open, too attractive. Even with the gifts of the carbon-based horse and the iron gun there were still too many Buffalo and not enough Indians. The mighty new iron-based horse had to charge, to build the requisite mountains of skulls, to clear the table for the next course on evolution.

As with all the higher animals, there is an innocence and a sweetness about the remaining Bison despite their formidable appearance. The men on horseback could ride right into a herd and fire at will. The Bison have no concept of this kind of predation. Poor Old Logan was doing what he could to protect his tribe in the only way he knew. The landed farmers were as enigmatic as UFOs to them. In the end, all they really wanted to do was to eat the grass. It is no stretch to imagine that all of the other Pleistocene animals, both predator and prey- even the Orcs- were of similar disposition- as long as you are not on the menu, and don’t mess with their kiddies or their doggie bowl.

A few thousand years ago there were several North American bison models to choose from, from the deluxe Texas-sized edition on down. The little guy on the right is the only kind left, the only one we know. This striking pattern is echoed across many types of Ice Age animals: the big ones went under, their little cousins pulled through. Artist: Roman Uchytel

The idea that the biggest animals were sought after is a complete inversion of the basic rules of predation. 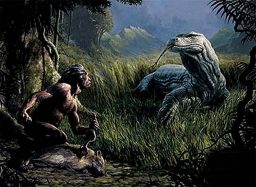 A predator cannot afford grave injury. He who fight and run away live to fight another day. The injured wolf cannot run with the pack anymore; it has to be left behind to die. The predator always looks for the easiest kill, not the most difficult. The predator, the bureaucrat, the businessman- the cleaning lady- all seek to make the necessary gains while spending the minimum amount of time, effort, and risk. Tracking prey over long distances would be quite perilous where packs of more capable predators are roaming the same territory. The hunter becomes the hunted. This is also a numbers game: one million or less Hobbits vs. 100 million or more Orcs per continent, with each Orc requiring several Hobbits for the dicey take-down. Additionally, each such operation has to be done while all the other Orcs are looking the other way, times 100,000,000.

Many of these Pleistocene animals had enormous ranges, spanning continents and even over several. A fanciful, blitzkreig annihilation would have to be coordinated between all the little tribes of warring Hobbits both in time and in geography, otherwise some of the animals would always be left to re-populate. The minor inconvenience caused by starting prairie fires over here isn’t going to stop the animals from simply moving over there for a bit, there to anticipate the lush new vegetation coming in after the burn. All those little stone arrowheads are clearly designed for small game, not the big stuff.

Some stories are better than other stories. The “Horrible Human Hunters are Awful” narrative has too many insurmountable problems to stand up to scrutiny, unless the absence of evidence can be entered to prove. It reads like badly-written fantasy: play stupid games, win stupid prizes. 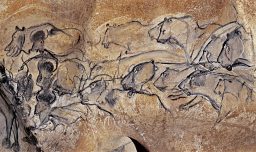 Ugh: “Nice pix, yo. How’s bout we roll on these lion and hippo packs and stuff?” Og: “Cool idea, brah. But I gotta hang here and finish up another 10,000 years of art class.” Artist: Og the Chauvet Caveman

The debate about the causes behind the Quaternary Extinction Event has gone on for a long time without resolution. The pattern of extinctions doesn’t make sense. Things don’t add up. Into this vacuum other theories- stories- about exotic diseases, comets, and black swan events, have been put forth. I made up a new story awhile ago too, about Earth’s gravity increasing just a tiny bit, just enough to make today’s elephant and giraffe the biggest and the tallest possible animals, and the condor or albatross the biggest possible birds.

Any of these things may well be a part of the truest story, but none of them can stand on their own. There are too many specific cases that don’t fit.

The Pleistocene Murders were so very selective. Very discriminating.

The bit about a lower carbon dioxide level can’t explain either why only certain animals went extinct and others did not; it’s much too capricious and indiscriminate. Climate change- the Ice Age, the cold, the drier air, less rainfall- can point to a great part of it, but it also runs into the specificity problem. That should have affected many more plants and animals, not just certain ones. But there is another diabolical piece to this puzzle, one the Prosecution had failed to fit to its proper place before.

The players and their furniture have been entered and examined. There will be war… [Part 6]

Part 5, The Winter of Life