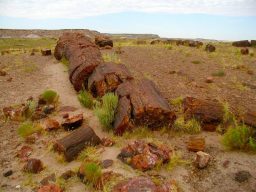 [Part 1] …there is another diabolical piece to this puzzle, one the Prosecution had failed to fit to its proper place before.

They began a long time ago, long after the dinosaurs were gone, sometime late in the Autumn of Life. We can’t say just when. The ancient forests were the first heavy casualties, blown or burned down, then crowded out by grasslands when the carbon dioxide level had fallen too low.

In the Spring of Life there was so much Carbon in the atmosphere that animals could not live on the land- they would have suffocated. It wasn’t until sometime around the Cambrian that the CO2 level dropped enough for the air to become breathable. From that time until our time the atmospheric Carbon has been slowly dwindling. What was once plentiful was becoming scarce, a rare resource to struggle over.

What Global Devastation looks like in MS Paint. Notice no Closed Forest shows up in Australia. They were still there, dotted along the coasts, but too small to show at this scale. There were other small refugia around the Mediterranean and elsewhere.

The destroying started off a little here and there, as a patchwork of open meadows surrounded by trees. Some places became better suited for grass sooner than other places. A place with enough water, light, and warmth was still congenial for trees.

By the time of the Ice Ages- the Pleistocene Epoch- vast regions had regressed to grass, desert, steppe, tundra, and, of course, ice. The forested areas shrunk to the smallest amount of occupied land since forests were Invented, hundreds of millions of years earlier. Large areas on all the continents had converted to C4 grasslands and scrub lands. It was the time of their greatest range. 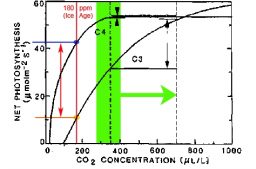 During this most recent Ice Age, the average atmospheric CO2 concentration dropped to about 180 ppm (parts per million parts of air), the lowest level in the history of the Earth. As the ice sheets built up, the ocean level dropped, reducing the evaporation surface area that  produces rain, so the global climate was also drier as well as colder.

Not very many plants went extinct, another curiosity, another clue. But a plant doesn’t need to go extinct in order for the animals that depend on it to go extinct. It only has to slow down its growth rate enough to become an untenable food source. The sizing problem of an herbivore, together with the poor climate, explains a great deal of the problem but is still too general.

But there is another diabolical piece or two to this puzzle. At low CO2 levels, C3 plants are competing, with major disadvantages, against C4 plants. C4 plants have other advantages over C3 plants- they are more efficient with water use and better adapted to drier conditions. They have a disadvantage of needing more energy to run their kind of photosynthesis but that can’t help the C3 plant compete if the CO2 level is too low. All year round a C3 plant in a field of C4 grasses is going to be relatively starved of CO2 because of the local vacuum-cleaner nozzle effect. That effect becomes more pronounced at lower concentration levels and in still or slowly-moving air near the ground.

It turns out that there is a marvelous way to tell the two types of plants apart, and to tell which kind of plant the animal ate. There are two main types of stable Carbon that come into play here- the standard Carbon-12 and a rare Carbon-13. This ratio doesn’t depend on radioactive decay or on any other dating games; the two Carbon isotopes are both stable. It turns out the C3 and C4 plants take up these two isotopes at different concentrations from each other. The animal that eats the plant then inherits the particular ratio for that type of plant. So even extinct animals can be shown to be either C3 or C4 plant eaters, by the ratio of the two Carbons in their bones. From this Carbon ratio we can tell what kinds of plants were growing where during the Ice Age.

The Pleistocene Murders began in Australia, the most desolate continent this side of Antarctica. “There are two distinct peaks of isotopic enrichment in the higher plant leaf wax biomarkers. These two peaks coincide with the Last Glacial Maximum (LGM; 21 ka) and the Younger Dryas (YD; 11.4 ka) and represent maximum increases in C4 grasses relative to C3 plants. Relative increases in C4 grasses during the LGM in other parts of the tropics (i.e., Sacred Lake, Mt. Kenya) have been attributed to the competitive advantage of C4 plants relative to C3 plants under reduced atmospheric pCO2 and is likely the cause for C4 expansion in northern Australia.” 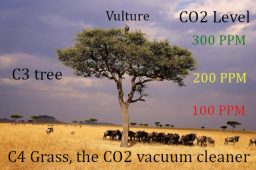 How the Iconic Acacia Tree Got its Shape. The average CO2 level at the trunk is too low to support C3 photosynthesis because the C4 grass is vacuuming it out of the air. No branches or leaves can grow there, so the tree has to put all of its leaves up as high and wide as possible. PPM numbers are hypothetical. The vulture is just there for show.

Imagine a huge expanse of C4 grassland with one C3 plant in the middle of it, with CO2 at 180 ppm. As air slowly moves across the plain, the C4 grass is vacuuming the CO2 out of it, even down to 20 ppm locally. As long as that air isn’t mixing too much with the air overhead, the CO2 concentration will fall with the distance the air travels. Once it falls from 180 to about 120 ppm locally, C3 plants will stop growing altogether. If an animal eats that plant, the plant will not be able to grow back.

At the same time, the animals that eat the C3 plants, which also includes ruminant grazers that can eat both kinds, are preferentially removing the C3 varieties, which cannot grow back as fast as C4 plants. This opens up more growing area for the C4 grasses, shrubs, and what we call weeds for good reason.

As the CO2 levels drop in the summer, the relative C4 growing advantage increases. If the average in the record is 180 ppm, it might have been dropping to 170 ppm in late summer just from this cause. A summertime drop to 170 ppm globally implies an even greater drop locally, amplifying the already tremendous advantage that the C4 plants have. This is when many animals are eating the most to store up for winter. If the animal doesn’t get enough food during this crucial time, it will die before the following spring.

The Irish Giant Deer, which ranged across much of Eurasia, illustrates. Their well-preserved bodies are found in the peat bogs of Ireland, where it is apparent that these animals died of starvation during the winter. Although their emaciated bog bodies aren’t looking so great these days, at least their story is well fleshed out.

As C4 plants became more prevalent, other animals that were C3 grazers tried to make the switch with varying levels of success. Some of them became hindgut ruminants, a sort of halfway measure. These and others ate both kinds of plants. Towards the end, some of these different herbivores were competing with each other by eating from the same dwindling food supply.

“…the whimsical-looking blue [grama] grass, shaped like a tufted toothbrush, is the historical favourite of the enormous bison.”

There is another little diabolical piece here. After the C4 plants had crowded out the C3 trees and grasses, and formed their own vast empires of grass, they now had to compete with each other. The same vacuum-cleaner effect slowed down the growth rate of these plants, not as severely as the C3 case, but just enough so that the larger C4 grazers could not get enough to eat in their limited ranges. The bigger ones, as the story of the Bison tells, would go extinct first. “Blue Grama is a widespread, long-lived, warm season, C4 perennial grass native to North America. It… accounts for most of the net primary productivity in the shortgrass prairie of the central and southern Great Plains. Plant height at maturity ranges from 15-30 centimeters.”

Another curious item. Although C4 photosynthesis has spread all across the continents, it only appears in grasses and other short plants, never more than a few meters tall.

Millions of years gone by and it has failed to ascend very far into the space above.

The majestic animals that wish to eat these kinds of plants must bow down.

There were hundreds of species that went extinct, thousands that survived, and each one has a story to tell. There are big C3-browsing animals that survived as well as small grazers that went extinct, so the match is good, but not perfect. The giraffes are big C3-browsers but they have the distinguished advantage of being able to eat from the tops of the C3 trees, where no other animal can reach. Even so, several of these species also became extinct.

Most of the herbivores that died were either C3 browsers, C3 grazers, or giant C4 grazers. Their chief predators ran out of prey, so they had to go as well. The mystery of the Pleistocene Murders is solved by this, with caveats and exceptions.

We see a potential repeat of the ancient Oxygen Wars which gave us our Oxygen atmosphere. At low CO2, C4 plants are the mortal enemies of C3 plants. The terrible CO2-vacuum weapon of C4 photosynthesis would assure their globalist victory and the annihilation of C3 plants and all that depend on them. If the unknown geological Carbon sources were to shut off completely, the remaining C4 land plants would then be at war with each other, struggling over the last available atoms of Carbon.

There is more to C4 photosynthesis than simply a different chemical or metabolic pathway. It has distinctive architectural features about it, in the way the cells are arranged in rings, or wreaths, and in the layout of the core C4 photosynthetic process itself. With the older C3 process, both carbon-dioxide and oxygen molecules are presented to the engines of fixation, which only need the Carbon. The Oxygen then has to be sorted out and turned away after it has already gummed up the works, a sloppy process. The great advance of C4 was to solve this problem by coming in and bolting on a kind of airlock, a parlour if you will, where the Carbon is first welcomed in and the Oxygen is turned away at the door. The Carbon is then ushered to the inner sanctum where C3 fixation will be done. You may think of it as the same function performed by the butler receiving visitors to the great house.

Prosecution requests the Court find the Perps, along with their Means and Opportunity, have been identified beyond a reasonable doubt. Court will examine Motive before passing Judgment… [Part 7]

Part 5, The Winter of Life