P. Alexander on Why Pulp Revolution is Different 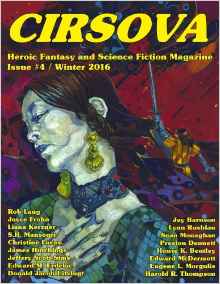 Chris Lansdown has an excellent interview with the mastermind behind Cirsova Magazine, the inestimable Castalia House blog columnist P. Alexander.

Within it you will find the most concise explanation of what Pulp Revolution is and what makes it different that pretty much everything else on the market:

What we’re doing with Cirsova is not about being part of “Pulp Revival” or being part of a “retro” movement. We don’t want to confine ourselves to that niche. What we really want to do is bring the kind of story that was being told in the pulps, not the aesthetic, into the mainstream conversation about SFF fiction. We’ve been accused of being “regressive” publication by those who are ignorant of pulps, those who assume that pulps were full of nothing but racist and sexist trash, but in a sense they’re right about us – we’ve embraced the idea that SFF needs to regress harder. We’re using the pulps as a starting point and going forward as though the Campbellian Revolution never happened, as though Burroughs was still held as above ‘the Big Three’, as though Leigh Brackett was still the Queen of Science Fiction rather than LeGuin or Atwood, as though fun, adventure, heroics, and romance were still a good thing in SciFi.

What you’re reading there is an honest to goodness editorial vision– and the science fiction magazine scene has not had one of those in decades. No, listen to how the big wheels talk about this stuff. You’ve got Asimov’s editor Sheila Williams going on to convention panels saying that pretty much everyone has sort of their own canon these days. You have Gardner Dozois– ludicrously, really– saying that the common denominator of the works he publishes in anthologies is that they’re all stuff he likes. Maybe there is some kind of grand vision underlying what all that they do, I don’t know. I’ll tell you one thing, though: people like this are about as far from issuing a clarion call as you can possibly get. There is no “there” there!

For the first time in a long while, you can read a science fiction and fantasy magazine where someone is actually behind the wheel!