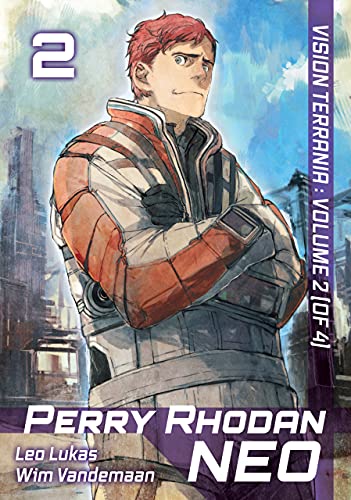 “You are the first Arkonide who has ever set foot on this planet. In your body there are literally two worlds colliding.”

When last we left Perry Rhodan, the astronaut had landed in the Gobi Desert, announced the presence of the Arkonides to Earth, and invited the world to come help found the new city of Terrania. Instead of the world, a Chinese army arrives to lay siege to Rhodan and his city. As bullets fly and bombs fall around him, Crest da Zoltral’s leukemia continues to ravage his body, and the only hope of a cure requires a daring escape from Terrania and its Chinese besiegers.  Meanwhile, a gangland shootout in Houston has sent John Marshall and his young mutant charges on a panicked flight across the Mexican border, pursued by police and mysterious men from the kids’ past.

As if the stakes were not high enough, Great Russia and America both send astronauts to the Moon in hopes of salvaging the ruined moonbases and making independent contact with the stranded Arkonide ship. Each expedition hides a suicide bomber with a nuclear bomb–in case the other team wins the Arkonides’ attention. If such a gameworld-addled crew might deign notice anything outside of their simulated worlds. And the world is answering Rodan’s call to join him in Terrania. A hardy mix of visionaries, zealots, and engineers are flocking to the new world-city’s banner, but crafty Chinese generals hide schemes of their own amidst these idealists.

In Perry Rhodan NEO #2, which contains the novels “The Teleporter” and “Ellert’s Visions”, these plots start weaving together into a web, as the national, commercial, and secret factions attempt to resolve the most important question of their time: who controls space now that humanity is not alone. Perry Rhodan represents an idealist globalism infatuated with the stars, the Chinese, a corrupt yet enlightened national self interest, the United States, a degenerate, hypocritical, and tyrannical nationalism, and the growing collection of mutants with esper powers, the combination of commercial and hidden factions. None yet hold the upper hand, but all threaten to bring more chaos and death to the Earth, and all are set on a collision course with Terrania.

So far, so good. Intrigue and action in exotic locations are pillars of pulp fiction. But science fiction’s infatuation with Wellsian social commentary in not restricted to English and American stories. As mentioned in previous reviews, Perry Rhodan NEO is a retelling of the original, attempting to become more relevant geopolitically and technologically than the original. This means that the story is trapped in a 2010 understanding of the world. Before COVID, before the immigration crisis, before ISIS. Before Europe started to understand the difference between influence and power. Leo Lukas is fond of repeating early 2000s jabs at America in “The Teleporter”, complete with El Norte-inspired takes on immigration and American arrogance. To say that these attempts to be relevant have curdled like milk in the wake of the turbulent 2010s would be an understatement.

But the social commentary in Perry Rhodan truly fails because it lacks vision. “The Teleporter” is a heavy-handed crack at the perceived hypocrisies of nationalism. “Ellert’s Visions” takes Arkonide gaming escapism to task. But neither posit an alternative. While Perry Rhodan is supposed to be the way out of the decadences of both alternatives, there is no vision as to why or what may inspire people to follow him. What comes across is an application of the Great Man theory and Chosen One plotting. We are given Rhodan as a model as to what we should look up to, but never an idea of what motivates him. Without a vision, the people perish–just like the Arkonides on the moon. Fortunately, the pulpy stories of alien fugitives, mutant espers, and daring space rescues shine through the thick Wellsian film.

To harp on the politics present is not to complain about the presence of politics in science fiction. After all, the chess match between Rhodan and the Chinese generals over the Gobi Desert is one of the delights of the series. Rather, the complaint is that the politics and commentary present breaks immersion, and readers will only tolerate such breaks for a limited time before abandoning the book. Perry Rhodan NEO fires on all cylinders when it comes to the intrigues and mysteries that fill its pages. It is a shame to see exposition interrupt these plots, especially when it is service to making Perry Rhodan NEO cleave closer to a “reality” that never was.

Fortunately, in Perry Rhodan NEO #3, one of the series’ best writers returns to introduce many of the original series’ most beloved characters. Whether or not readers get there depends on the tolerance for eye-rolling asides.