I just had another example this past week on the importance of primary research. That is, go back to the beginning and look at the material yourself.

This is the third time I can think of this happening.

The first event was back in the middle 1990s. I was the Official Editor of the Robert E. Howard United Press Association. REHUPA is an amateur press association with its focus on Robert E. Howard. A member produces his or her fanzine, prints up a specified number, and sends it to the O.E. The O.E. staples everything together, produces a cover, table of contents, treasury report, and short editorial/news section, and mails the final product to the members. An amateur press is a clearing house for separate fanzines. A common mistake people make is thinking it is some sort of coherent organization. One former O.E. said that an apa is not a case of herding cats but of herding retarded cats. 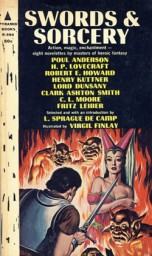 At the time we had L. Sprague de Camp, Glenn Lord, and Novalyne Price Ellis as honorary members. Karl Edward Wagner had been an honorary member but died the previous October in 1994 from multiple organ shut down after decades of copious Jack Daniels’ bourbon consumption.

L. Sprague de Camp would generally send a letter or card answering anything pertaining to him. He would ego scan the contents of a mailing to see if his name was mentioned. Most of the time he was fighting a rearguard action defending his decisions on the Conan books.

De Camp was a brick thrower who lived in a glass house. He was critical of Robert E. Howard and H. P. Lovecraft’s personalities while he had idiosyncrasies of his own. Meanwhile, he hated talking on the telephone. He said on a card sent to me that I can leave a message on the answering machine though he hated the thing. His secretary would call me up and pass messages from Sprague.

L. Sprague de Camp is important for bringing sword and sorcery fiction from the pulp and digest magazine format to the mass market paperback in the 1960s. Swords and Sorcery (1963), The Spell of Seven (1965), The Fantastic Swordsmen (1967), and Warlocks and Warriors (1970) are very important to the genre. De Camp had good instincts on material.

I asked him about some pulp sword and sorcery never reprinted. He was unaware of the Khor of Lemuria stories in Fantastic Adventures by Frederic Arnold Kummer, Jr. I photocopied the stories for him to read. He was amazed in that he never knew of these. He never heard of Gardner Fox and his stories in Planet Stories.

Take home point: We have an editor who only looked into fiction in Weird Tales and Unknown/Unknown Worlds. There is actually a fair amount of sword and sorcery and quasi-sword and sorcery fiction in other pulp magazines. I have been searching them out for 32 years. 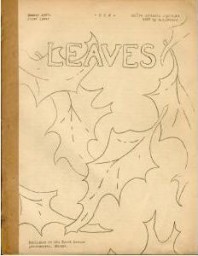 member of the Lovecraft circle and pulp magazine writer. One could describe a good portion of his fiction as a logical continuation of H. G. Wells’ short stories though with a Lovecraftian cosmic inclination to them. Wandrei also wrote a number of detective stories that read like Lovecraft writing for Black Mask magazine.

Going through a list of letters, one popped up that grabbed my attention. A letter from Robert E. Howard to Donald Wandrei. No one knew of this before I found it. Another case of primary research.

This past week, I remembered looking into a Wandrei story in Robert H. Barlow’s small press zine Leaves. I remember reading that Wandrei has fiction in the first issue. I found a table of contents of Leaves, Summer 1937 and “A Legend of Yesterday” did not register with me.

I contacted Dwayne Olson who is the Donald Wandrei expert on this to see if this story had been reprinted under a different name. Dwayne got back to me and this story had gotten past him for the Fedogan & Bremer collections. He did not know the story existed. So, we have another case of depending on work done before.

Take home point: Thoroughly research your subject. Go back to primary sources. Don’t depend that someone before has done the ground work.

Genre fiction is supposedly an area of academic study now as the classic mainstream fiction has been analyzed to death. You are going to have academic wankery with queer theory, feminist theory, colonial theory etc examinations of genre fiction. PhD theses are going to be produced footnoting previous writings on science fiction, horror, and fantasy. There are going to be pieces written by those with superficial knowledge based on secondary sources.

When I wrote my article of the Rowman and Littlefield Unique Legacy of Weird Tales, I mainly used issues of Weird Tales for re-reading of stories and going through “The Eyrie” (the letter column). I was not leaving to chance corrupt text in reprints and also to get a feel for the conditions.