Easily the most controversial observation to come out of my survey of the fantasy and science fiction canon was that they pulps were (by and large) both Christian and Western in their overall outlook. And given that word for word and sentence for sentence, many of these authors have yet to be surpassed within their field, the stock standard dismissal of their work as being juvenile, cliché-ridden, and painfully simplistic really doesn’t hold up.

It turns out of course that these they were not merely the target of bogus complaints posing as literary criticism. Yes, they were treated unfairly and they were arbitrarily sidelined from subsequent framings of the science fiction and fantasy narrative. But they were not real target in these actions. It was their culture that was offensive. Not their writing. Not the subject matter. Not their style. Not the type of paper their work was printed on.

For one more data point in this transition of the field of science fiction and fantasy, check out this post from The Pulp Magazines Project. Note these Street & Smith magazine covers from July, 1942. It’s not an accident that there is a small town church featured in this image of an American flag. It’s also not an accident that “mainstream” periodicals doing something like this today is patently unimaginable. 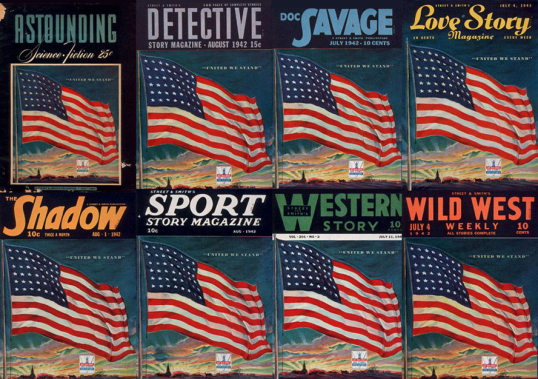