This week, we take a look at “Hunt of the Mine Worm”, by Jim Breyfogle, Small Unit Tactics #2, by Alexander Romanov, and Accel World #1: Kuroyukihime’s Return, by Reki Kawahara. 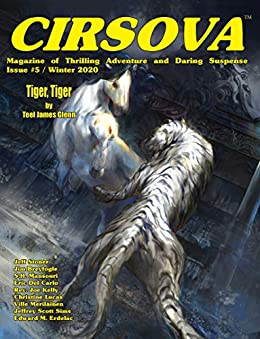 Cirsova’s flagship series returns in “Hunt of the Mine Worm”. This time, Mangos and Kat have been hired to clear a magic metal mine of a giant worm than has shut down production of its refined metal. The feat is made more difficult by the worm’s resistances to cutting weapons, poisons, and fire. Worse still, for the Mongoose and Meerkat, the mine’s foreman has hired multiple groups of adventurers to kill the beast, and to the winner goes the spoils. But a 20% stake in a magical gold mine is too much not to pass up, so the Mongoose and Meerkat will have to bring all their ingenuity to slay the mine worm.

Compared to previous Mongoose and Meerkat stories, “Hunt of the Mine Worm” is pretty straightforward, without the tantalizing hints into the mysteries surrounding Kat and the fall of Alness. But Jim Breyfogle continues to dream up unusual and even exotic settings for Mangos and Kat’s adventures. And while the Mongoose and Meerkat are never loathe to swing a sword, their adventures rely as much on cunning as the careful flash of a blade. This time, Kat uses a clever bit of real-world chemistry to defeat the invulnerable worm. And while most of the fighting by Mangos, Kat, and the other adventurers serves to showcase the worm’s invulnerabilities, the clashes also provide the sources for the special compounds needed for Kat’s not-quite-magic. Breyfogle’s skills have grown throughout the series, so the easy banter between Mangos and Kat hides any telegraphing of Kat’s last-ditch plan. 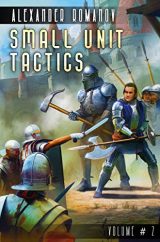 Echo and his clan of Needles have just saved their faction’s city from being razed. But other faction’s cities have fallen in the strange melee game. Enough to drive home the fact that, once enough fall, the players for the defeated factions will die for good, and rise no more. Echo must help with the defense of his city, thread the needle of faction politics, and delve for new weapons in order to win, or he and his Needles will die. But Echo is one of nature’s sergeants, and must find someone he can tolerate to lead the faction. Someone willing to let Echo and the Needles slip the leash and go on the attack.

Compared to just about every litRPG out there, Small Unit Tactics leaves so much money on the table. Two volumes of character growth and go-for-the-throat fighting that stop, not at the end of the campaign when Echo stands triumphant over all his enemies, but when Echo makes a choice. The strange game between the gods becomes real to him, and so do the consequences of his actions. In many ways, Echo learns to humanize his fellow players instead of using them as tools towards his gaming goals. And, in typical fashion, those lessons are driven home with pain instead of homily. As a result, he accepts the cost in blood to protect his own, even if it means the deaths of everyone else.

And as remarkably short as Small Unit Tactics is, for the story told, it should have been shorter, just as its melee-FPS clashes are shorter and more violent than most MMO fantasy games. Don’t get me wrong, Small Unit Tactics takes risks outside the normal guild wars MMO fantasy, both in system and in type of story told. And it might be the litRPG for those who despise stat sheets. It is, however, a freshman effort, and that shows in the pacing, writing, and characterization. But in a subgenre filled with freshman efforts, it stands out on originality alone. Want something different in litRPG from Diablo II clones? Want a bloody fantasy of divine gladiators slugging it out in a game that changes according to the whims of capricious gods? Read Small Unit Tactics. 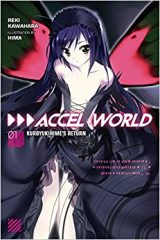 “Even in the future, all the advances and innovation in the world can’t change the dynamics of the school playground. And for Haruyuki Arita, a fat kid in junior high, that means he’s destined to always be at the bottom of the food chain, prime pickings for the school bullies. But when he is approached by Kuroyukihime, a beautiful and aloof upperclassman, Haruyuki’s life is turned on its head as he dives into Brain Burst, a mysterious computer program, and the Accelerated World with her help. It’s in the Accel World that Haruyuki casts off his depressing reality and takes hold of the chance to become a Burst Linker, a knight to protect his princess!”

I did not come into Accel World expecting much, as it was written by the author much reviled yet still popular Sword Art: Online. But Accel World puts more mystique into how the players choose the game. Certainly more than the arrival of a release date. And deep diving into a Matrix-tinged immersive version of Street Fighter 2 is original for the living video game concept. Accel World is a serviceable age-appropriate young adult fantasy without the weird adult baggage that clutters the market, but the bullied schoolkid storyline is cliché, and the white-knight groveling of the main character towards Kuroyukihime is just as dyscivic as the harems that fill the genre.