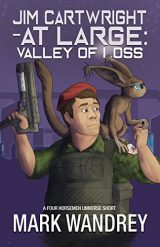 “Valley of Loss” is the second volume of Jim Cartwright at Large, a serialized novel bridging The Four Horsemen’s Revelation Cycle series and The Omega War. In Cartwright’s Cavaliers, responsibility and senior NCOs forged Jim from loser to a leader fighting on the battlefield in his own relic of a giant Gundam-style robot. Previosly in Jim Cartwright at Large, he discovered more of the coveted war machines in an abandoned space station. Now Jim continues his search for information, technology, and tactics that will allow him to create more of the giant mecha. This leads him to the the Valley of Loss, the last battleground where the mecha fought. Can Jim trust the scavengers littering the battlefield like locusts? Will he find the information and machines he seeks? And will his XO ever let Jim outside his sights ever again?

The pacing in “Valley of Loss” certainly reflects the serialized novel approach taken in Jim Cartwright at Large. Instead of the taut immediacy demanded by the short story format, half the chapter is a relaxed collection of exposition and flashback, and the other, plot. Certainly the glimpse into setting and character will pay off in future chapters. The flashbacks with Jim’s father explain why, even at his lowest, Jim never gave up on his dream to be a mercenary. However, action junkies will be craving more from his visit to the Valley of Loss. I look forward to reading the collected chapters of Jim Cartwright at Large to see how all the pieces fit together, but the serialized approach needs more self-contained stories that build upon each other than one single story split into multiple parts. That said, “Valley of Loss” certainly left me wanting to read more.

Jim Cartwright’s story is one of the few positive examples in recent science fiction of how a geeky and overweight boy can turn himself into a man through hard work and responsibility. And his stories are not preachy, but fun reads that inspire readers to meet challenges head-on in an adult manner without lingering in the juvenile fascinations of many “Young Adult” stories. Perhaps this gateway drug into the Four Horsemen universe might also be a gateway into manhood for many a teen reader. 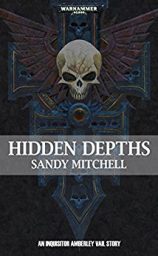 “Hidden Depths” is a side-story to Sandy Mitchell’s celebrated Ciaphas Cain series of Warhammer 40,000 novels. Rather than following the mishaps and victories of the Imperium’s answer to Harry Flashman, “Hidden Depths” instead follows the impish Inquisitor Amberly Vail, WH40k’s Flashman’s Lady, as her team of agents are hot on the trail of forbidden alien technology. Their pursuit leads them to the gang-infested underground caverns of a human hive city, an industrial center that makes New York City and its outskirts look like a sleepy rural hamlet. While deep underground, Vail’s clashes with urban gangs and abhuman mutants turns into a running battle with alien infiltrators chasing the same technology until, at the end, her team is cornered. With nothing more than the pistols in their hands and forbidden knowledge of alien races and technologies, Amberly Vail and her team must somehow escape.

This short story gives a glimpse behind the veil of the most atypical Inquisitor in the Imperium. Unfortunately, without Ciaphas Cain to play off of, Amberly does not exhibit any of the playful personality she is known for. Instead, she exhibits the pragmatic efficiency expected of the Imperial’s version of the secret service. A literary foil like Amberly Vail needs their partner, for it is in the contrasts where she truly lives as a character. And this adventure reads more as an outrigger to one of the Cain novels explaining how her team ended up somewhere unexpected than a story in service to itself. As such, the investigation and chase, while it sticks to the Ciaphas Cain formula of interrupting a second alien species’ machinations, is hampered by an incomplete ending. “Hidden Depths” is an appetizer that needs to be followed by a main course of Ciaphas Cain. 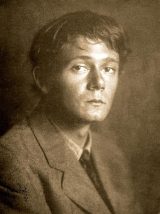 “Phoenix” is a rare Clark Ashton Smith science fiction story, often forgotten as its descriptions of the Sun violate the game of hard science fiction. Then again, it never sought to adhere to theory. Smith wrote a Dying Earth story in the vein of William Hope Hodgson’s “The Night Land”, but dressed it in clothes of science fiction, in rockets and atomics instead of abhumans and monsters.

Centuries after the Sun burned out and life on earth is reduced to a declining network of underground caverns deep below the icy service. As life dwindles in these sanctuaries, the best and brightest of the survivors hatches a desperate scheme to reignite the Sun with atomic bombs. Then, on the long flight to the darkened disk of the Sun, a miscalculation occurs…

As always, Smith’s imagery and wordplay are haunting, and the darkened valleys and volcanoes of the Sun are used to evoke emotional responses instead of convey facts about the composition of stars. “Phoenix” concerns itself with hope, resolve, and loss, and is an exploration of human nature through adversity. It’s also a fantastic adventure, somewhat muted by the strange mix of Campbelline despair and Golden Age Men with Screwdrivers to the Dying Earth genre. At least Smith allows his characters to remain heroic, something Campbell refused to allow as the editor of the contemporary “The Cold Equations.”  And the protagonist’s promise of “I will come back to you—in the sunlight.” is realized in melancholic splendor. “Phoenix” is an excellent throwback to the Romantic roots of science fiction and fantasy, and provides a great introduction to Clark Ashton Smith for those readers more inclined to science fiction than fantasy.