Rabble in Arms: To the Shores of Lake Champlain 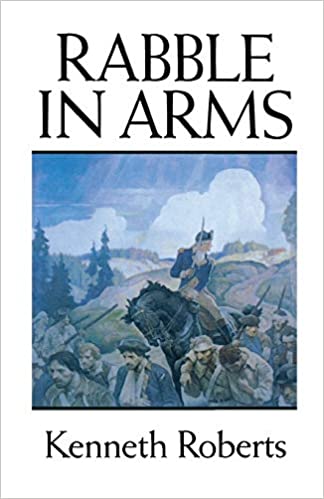 “In the beginning I must say that this is no book for those who swear by old wives’ fables, holding all Americans brave, all Englishmen honorable and all Frenchmen gallant. It cannot please such innocents as are convinced that men in public office always set the nation’s welfare above their own, not those who think all soldiers patriots. It will disappoint the credulous who cherish the delusion that patriotism burns high in every breast in the hour of a country’s peril.” – Captain Peter Merrill, Rabble in Arms, by Kenneth Roberts

Such words in the present day and the present hour, where war profiteers line up to sway elections, would normally serve to lessen the acts of the brave in defense of their country by ascribing venal motives to the sacrifices made. Kenneth Roberts instead heightens the bravery of the fighting soldier by contrasting him against the three curses of the American people: her war profiteering merchants, her political generals, and Congress. The complaints about chiseling merchants who would prefer lining their pockets with fifty years of war instead of swift victory resound in a time where the Cold War gave way to the War on Drugs and finally to the War on Terror. Roberts sets the privations and toils suffered by the fighting man against the pride and blundering of the politicians, merchants, and generals, and describes how easily the latter can waste the former. For the want of supplies, the invasion of Quebec failed. And despite the same lack, Benedict Arnold delayed the British just long enough to keep them from seizing New York in the winter of 1776.

But such a story needs a human face, to strive and suffer, to worry and overcome. We find ours in Britain, as the brother Peter and Nathaniel Merrill rush to return to Maine as war with the colonies breaks out. Nathaniel is quite smitten with a fellow passenger, Marie de Sabrevois, whom Peter soon suspects of being a British spy. Upon their return, and finding their family suffering for Nathaniel’s presumed Loyalist sentiments, both brothers sign up for a special scouting company attached to Benedict Arnold’s troops. Led by their townsmen Steve Nason and Saved from Captivity Huff, the scouts must venture northward to find General Arnold and deliver vital news. General Burgoyne is set to arrive in Canada with British regulars and Hessian mercenaries and invade the northern colonies.

General Arnold proves to be a capable and charismatic fighter, who soon finds work for the Merrills in creating a fleet of galleys and gunboats to delay the British at Lake Champlain. As the Americans and British build up their fleets, Peter finds himself in a strange net of intrigue between Marie, Nathaniel, and Marie’s niece Ellen. Ellen and Peter prove to be quite fond of each other, but the spy mistress Marie uses their feelings to drive a wedge between Nathaniel and Peter and even Peter and Ellen. Finally, the arms race is over, and the makeshift fleets clash on the waters at the Battle of Valcour Island, where we will pause with Nathaniel, Cap Huff, and Steve Nason wounded and most of the American fleet burning.

Roberts does a masterful job mixing in the harrowing cost of battle with the herculean feats needed to fight in one. Unlike many authors who criticize the sanitary and jingoistic portrayals of war, he does not denigrate the bravery shown by the soldiers. However, Roberts also does not shy away from the costs in sweat, blood, shivers, and disease of war. Rabble in Arms just does not have the fascination with pain and gore that more contemporary writers seek to shock readers with. And while Roberts is truthful about the costs, his depictions never seek to extinguish the other truth about war–that it can be an adventure, too.

Roberts occasionally gets taken to task for his portrayals of the various peoples in Rabble in Arms. For what, I’m not sure. He does an excellent job portraying each as sometimes better, sometimes worse, and mostly just different than the rest. The clash of custom becomes an amusing aside as Peter and Ellen slowly orbit each other, frustrated by the mix of American, Canadian, and Indian customs they find around them. Roberts instead pokes fun at the various superstitions each people have about the others, whether it is American and Indian, British and American, or even the various American states and each other. The real ire is aimed at the venal and well-connected in each group.

As of now, the war drums are beating a path towards Saratoga, with Marie still on the loose and the genius that makes Arnold’s immanent betrayal a still fresh wound in the American psyche yet to be revealed. Will Peter and Nathaniel, Steve and Cap return to their homes in Arundel or find themselves captive in a British prison? We will find out in the second half of Rabble in Arms.