“Ratatouille”: A film that would be bad if anybody but Brad Bird made it

This is a…rather grim poster?

Brad Bird is a genius.

Now I have made it abundantly clear that the greatest living animated director – perhaps director period – is Hayao Miyazaki, but as far as western animation goes there are several directors in competition for the title – John Lasseter, Pete Docter, Andrew Stanton, Lee Unkrich…

In other words, Pixar.

Throw Don Bluth in there too, he’s still alive.

But for my money the real winner here is Brad Bird, the director of two of the great classics of animated cinema. We have “The Iron Giant”, a surprisingly sophisticated story about a boy living with his mother who finds – what else? – a massive iron giant in a junkyard that comes to life and becomes his friend, and, of course, we have “The Incredibles”, one of the most countercultural films of the 21st century and a masterpiece, not to mention the greatest superhero movie of all time.

The story behind “Ratatouille” is rather interesting. The idea had been around since 2000, but for one reason or another the Pixar team lost faith in the originator of the concept (Jan Pinkava) and it languished in development hell for five years before they gave the job to Bird, who was still basking in the triumph of “The Incredibles”.

The basics of the concept were used, but Bird tweaked much of the movie and re-wrote the script entirely. So the movie is basically an exercise in “Give Brad Bird these parameters, and see what he can do with them”. “Ratatouille” is the result.

So let’s get back to my title. “Ratatouille” is not a perfect film. It falls into traps many modern movies fall into. The parents are country aw-shucks yokel bumpkins who keep Remy from following his dreams, but Remy knows better: He’s braver and smarter than they are! Never mind the fact that his parents are 100% right about everything and things only work out through the magic of movie contrivance.

Really, to drive his point home, Remy actually makes a point of saying that his family doesn’t do smart people stuff like read! The meaning is clear: Parents=dumb fun killers who only become cool when they give in to Remy. Remy=correct about everything.

The main character, Linguini, is a spineless wimp who undergoes absolutely no character development, and he falls head over heels for a woman who acts like a total bitch and who has no personality trait besides “Rawr, I’m a badass wymyn!” Their romance is forced and weak. We have no idea why either of them would like the other.

The plot is whitebread generic. The exact same basic story was recycled in “Zootopia”, just off the top of my head: Child of bumpkins goes off into the dangerous world against the advice of their idiot parents, has a hard time of it, but ultimately proves that despite the fact that their parents were actually right about everything they win in the end anyway.

In other words, classic Hollywood blandness.

So why was it good anyway?

I have watched the director’s commentary to “The Incredibles” more than once and one thing you realize is that Brad Bird pays an astonishing amount of attention to detail. “Ratatouille” confirms the point. All of the cooking scenes shown in the film are absolutely spectacular. The chefs act like real chefs, run a kitchen the way a real kitchen is run, and cook real things. Every ingredient used in every dish is an actual ingredient, and all of them are used in the correct order to make the food come out the proper way. The choreography of the scenes is exceptional, and is one of the biggest reasons the movie works so well.

The characters are all charming and likable, even Linguini…Collette not so much, but she gets some killer lines (“Don’t mean to be rude, but, we’re French”). The voice cast, as always, is exceptional.

But most importantly, the film looks and sounds GORGEOUS. I think this is the real reason it still holds up as well as it does. Michael Giacchino once again makes the case that he is the most criminally underrated composer in Hollywood (lots of work, little attention), and his score for “Ratatouille” is one of my all time favorites. It absolutely drips with atmosphere, making you long for a version of Paris that probably never really existed and certainly no longer exists now.

And the visuals! Oh man, the visuals. Just take a look at some of these stills: 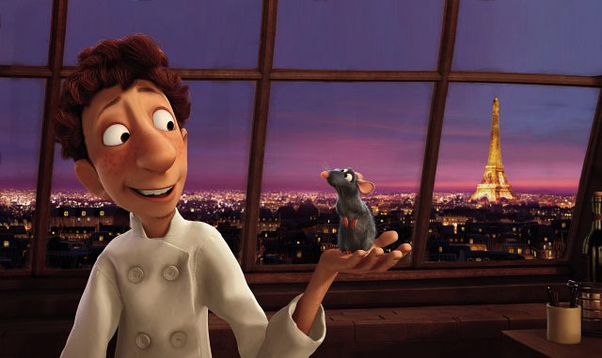 Check out that background, man

Tell me you don’t wish you could go to that Paris.

I think, though, that the ending is where Bird’s footprint is most clearly visible…in the best possible way.

Remy the rat the entire movie has dreamed and dreamed of being a chef, and is finally given the chance to impress Anton Ego, the famous food critic. Given his big chance, he serves Ego ratatouille, a “peasant dish”, but of course it blows Ego away. And after this Remy is revealed to Ego as the real chef, and not Linguini.

Ego in response to this writes a review that contains this line:

Though the “follow your dreams” theme is kept there is something particularly Brad Bird-ish about that line: Not everyone is going to be great. You might not be special. But that doesn’t mean there isn’t something out there for you – and you shouldn’t give up on that.

In my “Whisper of the Heart” review, I said that there was something particularly Miyazakian about the script, a level of sophistication not normally seen in western animation. Well, there is something particular Brad Bird-ish about the ending of “Ratatouille”, a level of sophistication that most western animation doesn’t even aspire to.

Brad Bird is, in my opinion, the best director working today. “The Incredibles 2” does not look promising, unfortunately (“Moms are the real superheroes?” Reall, Bird? That’s where you’re going with this?), but considering his track record I plan to give it a shot. And if his weaker work is going to be on the level of “Ratatouille”, well, I’ll consider the movie a success.