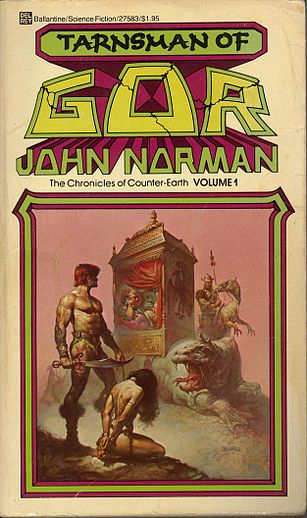 Over at Save Versus All Wands, a post about a throwaway blog comment of mine has gotten record levels of traffic. Which is ironic, because I would have thought such sentiments would have been completely unremarkable among “old school” gamers. Fortunately, some people get it. I find Steve Queen’s comment there to be particularly cogent:

I love the description of OSR. Seems spot on to me. As a DM I definitely give the players “every benefit of the doubt”, with “every ruling and interpretation is made in their favor.” That’s because I want them to succeed, try new things, and get deeper into the world, etc.. But that doesn’t stop them from feeling like TPK is always just around the around, and that the odds are stacked against them. There is no ‘game balance’, and they know when to run. Most plans do go haywire. How they react, and the results that surprise both them and me are the most fun.

When I was a 0th/1st edition player back the 80’s, we died A LOT (every character did eventually), but I can still say that the player’s story grows with time if they survive for a bit (ever heard of Tenser? Robilar?).

First level PC’s are fairly disposable, but make 2nd level and your chances of continuing to survive grow quickly. All my players are super-cautious, and very reluctant to take risks with there 5-7th level PCs—because it’s taken them nearly two years of weekly play to get there.

Every time the players try to synthesis a grandiose back story, it always feels contrived and quickly gets forgotten. However, they absolutely love meeting up with NPCs and telling them all the amazing adventures they have (actually) had. The ‘true’ events of their past games are way more improbable and interesting than anything they could have concocted up in a vacuum.

PC wish-fulfillment (in terms of character identity) always comes off as a sad frog-claiming-to-be-a-prince. Better to be defined by their actions than any fabricated “past”.

Meanwhile at the OD&D ’74 boards, long time gamers struggle to grasp the point of my book on Appendix N. This comment by The Perilous Dreamer there is a rare example of someone using the book in the way that I actually expected to happen:

This book is a gold mine summary of a few of the ideas found in each of these hard to get your hands on books and therefore of great value to “Do It Yourself” gamers. I personally in reading the book, came across dozens of ideas that I have used and was reminded of where those ideas came from (in some cases books I read under the age of ten and then used the ideas when I discovered OD&D in college). I also was reminded of ideas that I did not use, but now with the memory jog may use in the future. I have also been inspired to go back and re-read some of these and other books that are not on this list.

That’s quite an endorsement!

It’s quite a contrast to the overall reception there, which is more along these lines of this comment from hedgehobbit:

I had to step away from this forum because this thread made me so angry.

The “literary antecedent” of the “Gygaxian dungeon” is Dave Arneson. This isn’t even up for debate. The original 1972 prototype of the Dungeon! board game still exists. Pictures of it are all over the internet. And just about everything attributed to Sign of the Labrys is present there: multiple levels, secret passages, themed levels, etc. We have a first hand account of the original dungeon expedition so we know how exploration worked in that game (and it’s little changed from today) and we even know the leaders of the various faction involved in the Blackmoor dungeon. Lastly are Dave’s own words about what inspired him to create the dungeon in the first place (and it ain’t this book!). Dave introduced Gary to his D&D concept through the Dungeon board game. There is nothing leftover that needs explaining.

I don’t hold it against Jeffro Johnson for not knowing this. 99% of D&D players don’t know the story of D&D and are just repeating the common myths. But HERE!?! Where the actual originators have posted? I can’t understand why we aren’t collectively trying to debunk these obvious errors before they make it too far into the mainstream. How many people are going to read this book and end up thinking that Gygax invented the mega-dungeon?

If you were wondering why it was that David R. Megarry dropped by to object to the concluding chapter of my book, this is why. If the Appendix N books are given any credit for inspiring the Dungeons & Dragons game, then this is seen as coming at the expense of the pioneers of fantasy role-playing that have unfairly been written out of rpg history. Of course, the fact that Fritz Leiber and Roger Zelazny had a part to play in the genesis of the game does not take away from the contributions of Dave Arneson and David R. Megarry. But these people will tie themselves in knots behaving as if that really were the case.

It’s an unusual perspective, but I’m actually thankful for it. The whole time I was writing the book, I couldn’t get over how lucky I was that I’d have a chance to break a story as big as the one surrounding Appendix N. The veritable Greek Chorus that shouted down anyone within the OSR that began looking into this topic was actually doing me a tremendous favor!

This is not to say that all of the negative comments at the OD&D boards are this “principled.” Some of it is downright bizarre, such as this claim from cadriel:

A book that doesn’t discuss Tarnsman of Gor isn’t a literary history of D&D; it is at best a book about Gary Gygax’s personal favorites.

You know I’ve seen Appendix N dismissed for failing to include C. L. Moore and Ursula Le Guin. I’ve heard countless objections to my claim that it is essentially the lost canon of fantasy and science fiction. But this really is a new one on me.

Is this guy for real? I seriously doubt it. Just the other day he lodged this complaint against my piece on A Princess of Mars:

He complains that Princess Leia wasn’t in a metal bikini until Return of the Jedi, and that a better space princess would have worn nothing but skimpy outfits like Dejah Thoris.

I have a daughter to raise, I can’t put up with that stuff, man.