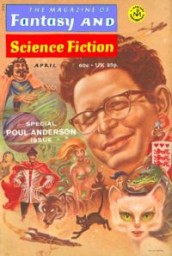 November 25 is the birthday for Poul Anderson (1926-2001). He is an important author in my life. I probably have more books by Anderson than any other science fiction author (Jack Vance is probably second).

Anderson wrote space opera, fantasy, humorous science fiction, mysteries, a little hard science fiction etc. He not only had breadth but also ability in just about anything he tried.

Poul Anderson’s fiction generally had an adventurous slant. You rarely read a bad Poul Anderson novel. I have called a portion of his fiction as “thinking man’s space opera.” I picked up some knowledge of astronomy and physics along the way reading his novels.

It may be a surprise but there are some unreprinted Poul Anderson stories in both pulp and digest magazines– “Goodbye, Atlantis!,” “The Virgin of Valkarion,” “The Long Return,” “War-Maid of Mars” etc. Enough easily for one if not two paperbacks.

I have been perplexed that “The Virgin of Valkarion” (Planet Stories, July 1951) has never been reprinted. Anderson wrote three disguised sword and sorcery stories for Planet Stories – “Virgin”, “Witch of the Demon Seas” ,” (January 1951 as “A.A. Craig”), and “Swordsman of Lost Terra” (November 1951). Two stories are set on other planets (“Virgin” and “Witch”), “Swordsman” in the far future on Earth. Substitute pseudo-science in place of sorcery but the feel is the same. I once read that Anderson did not want these early blood and thunder stories reprinted. Tracking down unreprinted Anderson is what started me on the path to collecting Planet Stories. Anderson uses a Nordic barbarian prototype for “Virgin” and “Witch.” “Swordsmen” uses a Celtic based culture in what the late Steve Tompkins called “a remarkable piece of cultural ventriloquism.”

Anderson wrote one of the top five fantasy novels of all time, The Broken Sword. This action filled, doom laden novel is one of the leanest novels you 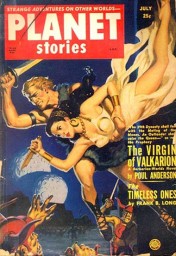 will ever read. Using the same sources as J. R. R. Tolkien, Anderson produced a novel than most authors would be willing to lose a finger to write. Anderson’s elves are not the Christian elves of Tolkien. They are cunning and act in their own interests.

“The Barbarian” is perhaps the first parody of sword and sorcery. It is a funny story.

The three Gunnar Heim stories make up the book The Star Fox and originally appeared in The Magazine of Fantasy & Science Fiction. The stories are less blood and thunder but still rousing science fiction adventure.

The Time Patrol series is a delight for those who love history. I have to say the alternate time line in “Delenda Est” where Hannibal beat Rome and Europe is Celtic dominated is appealing to me.

The Dancer From Atlantis is one of those disparate groups of people thrown together from rifts in the time stream. 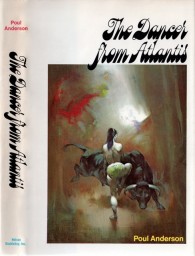 We were fortunate in Anderson produced a classic again using Norse mythology late in his career, The War of the Gods. This is a novel worthy of setting on the shelf next to The Broken Sword. Unfortunately, Mother of Kings was not a classic. If you write about medieval Scandinavian noble women and their drama, it is not going to appeal so much to the XY chromosome set.

Instead, I will direct you to read Anderson’s historical adventure novels- The Golden Slave (Cimbri vs. Republican Rome), Rogue Sword (Grand Catalan Company in early 14th Century Byzantine Empire), and The Last Viking (Harald Hardrede). The historical details are impeccable in these books.

The posthumous story, “The Bog Sword” (The First Heroes, 2004) was Anderson back on top though with a story set in northern Europe at the beginning of the Iron Age.

So, on Wednesday, pull out a Poul Anderson book and read one of his stories. It doesn’t matter whether space opera, time travel, or fantasy. Raise a glass of mead to his memory. 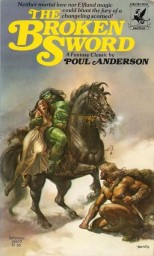