RETROSPECTIVE: A Spaceship for the King by Jerry Pournelle 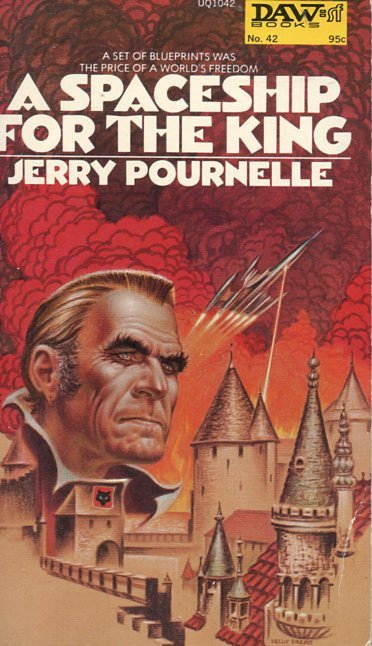 The literary inspirations of Traveller are significantly harder to pin down in comparison to D&D. In the first place, there is no counterpart to the “Appendix N” list in the pages of its core rules. The idea that the game could have drawn from a diverse range of short fiction is thus something that most people don’t even think to consider. There has been a lot less discussion on this point in the gaming scene as a result.

Of course, by design the game is just generic enough that people tend see what they want to see in it. I know I always assumed that it must necessarily be drawn from classics such as Foundation, Dune, and Starship Troopers… and then chalked up the departures from that to the guys at GDW simply being eccentric. Anything that is too out there– the low lottery, mesh armor, slow drug and the like– are often quietly omitted from actual play when referees set themselves to conveying a their idea of a coherent and more or less “hard science” oriented setting.

Certainly, the idea that Jack Vance might have provided the template for the scout service is not something that comes up a lot. Granted, Michael Andre-Driussi’s superb article at the Internet Review of Science Fiction does mention the demon prince series. But there’s clearly a lot more arcana to be unearthed here.

I say all that because I’m going to make a claim that will be hard for many to accept: that Jerry Pournelle is responsible for creating what would go on to inspire the jump drive of the most popular and best developed science fiction role-playing game. Here is the passage from A Spaceship for the King that I think made a direct impact on the formation of Traveller:

“There’s two kinds of drive, normal space and hyperspace. In normal space, the fusion drive works into a Langston Field releasing photons which propel the ship right. Never mind, I’m not allowed to explain it to you anyway. But this pushes the ship right along, and we experience acceleration from it. The hyperspace drive works on a different principle. It only works along the pseudo nuclear force path between two stars. I don’t suppose that means anything to you. There are force paths between the stars similar to the forces that hold atomic particles together. They fade off rapidly in an exponential relation to distance– oh, hell, that doesn’t tell you anything either. What’s important is that the drive won’t work if you’re near a sun or a planetary body. You have to get a long way out from the primary to get into hyperspace, and it kicks you out when you get close to anything. So once we get decelerated to a speed not too great relative to the sun we’re leaving, we can get into the hyperspace path between the stars. In there we can go faster than light.” (p. 60)

Now, these days the idea that ships would have a separate drive for each of maneuver and faster than light travel is so ubiquitous that it’s hard to imagine anyone ever coming up with it in the first place. And I have no doubt that there are many other stories that have that element before the publication of this novel.

On the other hand, this idea that hyperspace drives do not work near a planet or a star is a downright quintessential aspect of Traveller. Again, though, I seriously doubt that Pournelle is the first person to come up with this sort of thing. I would not be surprised to find out that it was relatively common before Star Wars came out. Certainly, it’s not an integral premise of science fiction today if The Force Awakens is any indication.

Why do I think this is the particular passage set the course for the world’s most respected science fiction role-playing game…? Because of everything else that’s in the book:

Now… none of these things are quite the smoking gun that I would like. Any one of these could easily be dismissed as coincidence. Taken together, however, this book amounts to what is clearly a proto-Traveller universe. And it’s easily among the closest matches to the default setting for the original three booklets that I’ve ever come across.

The most surprising thing about it is the role of the church that’s depicted here. The “official” setting has remained neutral on the point of religion throughout its decades spanning existence. But here in one of the game’s primary inspirations, the Catholic faith is presented as being a significant aspect of the Imperium’s culture and politics. People that think that science fiction is necessarily the domain of guys like Asmiov, Clarke, and Sagan simply will not expect to see a future history like this having this degree of influence at the exact some time that the New Wave was at the peak of its dominance.

And when I say that this book is influential, I am not only talking about the Traveller role playing game. Children of the eighties would have been perplexed about just why the insanely popular BattleTech setting was so different from the Japanese ‘mecha shows that it was supposedly based on. The science fiction of that game were significantly out of step with with the Star Wars and Star Trek scenes as well. The resulting cognitive dissonance didn’t ever bring play to a halt, no. The differences were part of the appeal, really.

What happened…? Well, in the same way that the Pulp Era has been weirdly swept under the rug by literary pundits, there is what amounts to an entire class of science fiction that built on it throughout the sixties and seventies which is very different from how people tend to frame the field. These books might come up in discussions about science fiction as much today, but for tabletop game designers in the seventies, they practically defined the field.

I believe that this book is a common ancestor to both Traveller and BattleTech. Looking at the cover again and reading the invocation of the Secession Wars inside, I can’t help but think that the MacKinnie’s Wolves presented here could have served as the impetus for Wolf’s Dragoons. Either way, if you’re a fan of those games– and even if you aren’t– you’ll want to track down a copy of this one. It’s just plain awesome.