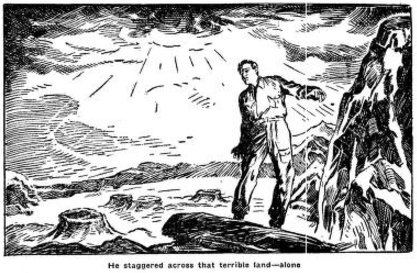 The year was 1939, little more than a year since John W. Campbell took over the reins of Astounding and John B. Michel declared science fiction dead. But Argosy had not gotten the memo. No, the magazine that had been the stomping grounds of Edgar RIce Burroughs and A. Merritt was not quite ready to get with the times, so it had no problem publishing one of Jack Williamson’s best short stories.

There are many striking things about this piece. On the one hand, it is evident that A. Merritt was still considered a giant in the field, as the prose of this passage indicates:

Behind him, beyond the cragged granite fangs of Enderby Land, as he climbed above the ramparts of the polar plateau, the sunset had been frighteningly stange. An incredible wheel of crimson, rolling along the rim of the world, it had been winged and tufted with eldritch green.

The aurora was another disquieting scrap of the puzzle. It burned above him all that night, whenever the sky was clear, until all the white antarctic wilderness seemed on fire with its sinister and shifting brilliance.

The lushness of the best “weird” fantasy and horror of the twenties was not yet off limits. But touchstones of the Silver Age of science fiction are in evidence here. The protagonist is not from the same mold as heroes like Tarzan and John Carter. And yet, though he is the sort guy that can whip up a carburetor in a pinch, there is more than a little of the sort of two-fisted daring here that could be taken for granted in a time when superlatives like “thrilling” and “wonder” were not considered déclassé by the leading figures of science fiction.

And if you’ve been told that heroines had a shortage of moxie in the days preceding Leigh Brackett’s entry into the field, then you were told wrong. She spends the bulk of the tale not only giving the hero a piece of her mind, but also doing the sort of scientific grunt work that would give Earth a splinter of a chance at survival.

As to what happens when the story really gets going… well, you need to experience that for yourself, because it is flat out AWESOME.