REVIEW: Awake in the Night Land by John C. Wright 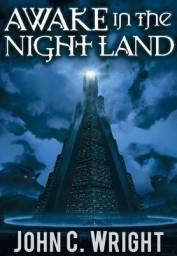 “Awake in the Night Land” is my favorite book I’ve read this year, my favorite of Mr. Wright’s, and easily the best-adapted parallel work that I can think of — a lollapalooza of fan fiction. Its Promethean characters are rousing, its Lovecraftian monsters are horrifying, and its Tolkien-esque prose help make it stand as one of the greats among the Dying Earth genre.

And dying it is. We begin circa AD twenty one million, and the text tells us plainly we are seven million years before the extinction of mankind. What’s left of humanity survives in the Last Redoubt – a pyramid cities stacked into cities seven miles high – situated on the last source of living energy (the ‘earth-current’). Outside of the citadel is the Night Land, a hellish, hostile, and gloaming landscape full of Night-Wolves, Watching Things, abhumans, Behemoths, Walkers, and evil Powers beyond reckoning. The tales told here center around characters who for some tragic, foolhardy, and brave reason must leave the invulnerable redoubt and venture into the Night Land. Anyone who leaves carries a suicide capsule, to escape death, torture, and worse. So stark is the setting and so heroic the characters traversing it that Wright makes Frodo walking across Mordor look like child’s play.

There are a few passages here of such supernal poetry that I believe they were divinely inspired; if not, they at least point in that general heavenly direction.  Either way, they will stick with me for a long time. In one, a brave man battles an abhuman in the black-pitted vesuvian landscape of the Night Land, facing certain death (and worse), when a far-off cry renews his hope:

“At that moment , I heard a murmur like the roar of the sea . To my left, miles away, the Last Redoubt was visible, balcony upon balcony shining, a wall of light. People had been watching my duel. When I had first lit my weapon and struck at the first abhuman, men, women, and children standing in the pyramid windows, or over their telescopes, must have cried out. Perhaps only a gasp, or a word of hope, but, amplified by a million voices, it became a strong noise on the wind of the world; only now had that cry reached me. How that sound filled my heart! I saw doubt twist the sneering muzzle of the abhuman; his eyes were troubled.”

The other memorable passage is along the same lines and comes from the same story, but I’ll leave you the joy of reading it in context. Each one is a variation on the same primordial theme: “The Light shineth in the darkness, and the darkness comprehended it not.”

Wright has taken William Hope Hodgen’s work (of which I am not familiar) and constructed a rich, textured story that is as delicate as it is epic. Of what I’ve read, this is without a doubt his most masterful.