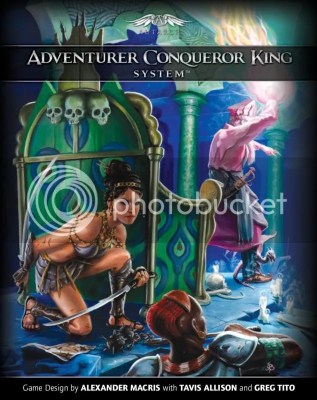 The Adventurer Conqueror King System is modern variant of the “Basic” iteration of the original fantasy-role playing game. It has well developed rules for the oft-neglacted domain-level play, a large selection of variant classes and a GURPS-style system for making new ones, an excellent set of mass combat rules, and one of the best mega-dungeons on the market. It’s an eminently playable system that builds on classic D&D while accommodating the demands of a surprisingly broad audience.

Even better,  it is now supported by a quarterly PDF magazine. Here’s what’s in the first issue:

Now, this is the sort of stuff that has shown up in countless peoples’ house rules over the years. The ACKS crew tends to kick things up a notch in the design department, however. If you’re looking for something that can complicate the usual “continue delving or go back to town” debate, this is just the thing. The steady accumulation of penalties for using black magic can add a significant strategic layer to spell selection– unleashing Sleep and Fireball doesn’t have to be the no-brainer that it’s traditionally been!

Another thing you’ll find here is a first class treatment of D&D’s literary inspirations. The rules for magical corruption can be cranked up to Robert E. Howard or even H. P. Lovecraft levels. The Wizard class presented here comes in several variations that are clearly patterned after Gandalf, Rhadagast, Saruman, Alatar, and Pallando. Finally, the rules for “arcanogenesis” are reminiscent of the sort of thing you’d expect Jack Vance’s Pandelume to want to experiment with.

If you already play ACKS, you won’t want to miss this. If you don’t… this is one more reason to give the system a look. Either way, check it out!