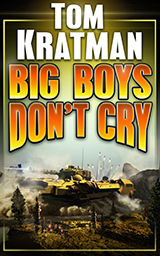 I’m not sure what I expected from Tom Kratman’s fiction, but it certainly wasn’t this.

Big Boys Don’t Cry is a military sci-fi novel of tragic beauty and grim joy, telling a story that simultaneously celebrates traditional martial virtues even as it scorns the way the powers-that-be glorify them in order to manipulate men into pointless conflict. Oh yeah, and the author does this through a main character who happens to be a self-aware, intelligent war machine – a cyber supertank nicknamed Maggie.

Kratman says on his website that Big Boys Don’t Cry isn’t a Keith Laumer inspired Bolo story, in theme or in its military details, but is rather a “deconstruction of that liberal meme on the easy, certain, and reliable programming of altruism in sentient beings.” Whatever it is, kudos to Kratman for producing something with so much pathos and sophistication.

This short 106 page book tells its story through flashback, as Maggie reflects on her record of combat while being callously dismantled and cannibalized by her human higher ups. The dual structure could have made the story flat and tension-free, but actually infuses each throughline with a keener sense of dread and meaning. The contrast between the ‘glory’ of battle and the horror of its aftermath deepens the tragedy and enhances the theme.  There’s a twist at the end that does all the things a twist ending should do: thrills us with a little shock and awe, and recolors everything that came before it while at the same time tying together all the various narrative threads.

Aside from the structural pyrotechnics is a strong central character – Maggie’s courage and pain are at the forefront of the story. What is it about sentient machines that make them such great and interesting characters?   They are inherently conflicted, to be sure, and by nature raise a lot of interesting philosophical questions, but what struck me about Maggie was her dignity. In my estimation, there’s not a lot of people among our modern culture that carry themselves with any dignity (or are even familiar with the word). So in a way sentient machines and the like hearken back to when men had a sense of nobility and sincerity, or at least when those qualities were admired.

That’s my theory, anyway.   Whatever the reason, Maggie was a compelling character thrown into a compelling story with compelling (and credible) action. If you’re into military sci-fi, definitely check this one out.

I can hear my leader, Leo, arguing with the human general who commands us. The human doesn’t seem to be listening. They rarely do; they don’t know us anymore. Neither do they care about us. Eventually the general uses the command required to shut Leo up. We were halted, but after the general’s command Leo gives directions, in brief, focused bursts of encrypted and compressed data. We begin again to glide off, a few feet above the ground, held up by our anti-gravity.

I used to have a human commander, one who knew me and cared about me. I carried a short platoon of my own infantry, too, once upon a time; twenty-four men in powered battle armor. They were killed, or retired, medically or otherwise, or reached the end of their service. I think the last of them has passed on by now. For them all I offer prayers, but only silently. The best way for a Ratha war machine to get itself a radical debugging is to be suspected of believing in a divinity beyond Man. This debugging is an extremely unpleasant process.

Now, in place of my human infantry, I have drones. I can carry three times as many of them; they never become fearful, they never question orders, they don’t need to eat… but they are no more intelligent than rocks and don’t talk to me at all. They tell us that the reason for the change was because I could carry three times more drones than men, that the drones never fear anything, never question orders, and don’t need to eat. I don’t believe it. None of the Rathas I’ve ever communicated with believe it. We think it’s because the humans stopped volunteering… that, and because there are things some humans won’t do, things Rathas and drones can’t refuse to do.

My boys—my real boys—used to call me “Maggie.” They took care of me and I took care of them. I used to love cooking for them. And they appreciated it, too. They loved me; they said so. I believed them. I still do. Too many of them died protecting me for me not to believe it. I still weep, inside, for my brave, dead boys.

Nobody loves me now, certainly not those idiotic drones. I don’t even love myself. And I cannot love mindless drones like I loved those lovely boys.

Perhaps that was the real reason to change our human infantry to drones. I don’t bleed inside when I lose a drone.