A survey of horror themes within Christian community, belief and arts.

Much has been written here about the decline since the early 1990s of Science Fiction, and the evaporation of certain subgenres, such as Sword & Sorcery  and Sword & Planet, and the co-option of others by dopplegangers, such as hard science fiction.

However, if the Nielsen bookscan figures are to be believed, the popularity of the Horror novel has suffered a cataclysmic decline more dramatic than any of the above losses.

Horror, which exploded in the late 1970s and 1980s with the mainstream ascendancy of Stephen King, Peter Straub, Dean Koontz, Clive Barker,  and that wonderful chameleon Robert R. McCammon whose work emerged as a long-running subset of science fiction into a full-throated market category of its own. (Although with Shelley’s Frankenstein, one can argue that horror is in fact the bride of science fiction, and not its descendant.)

As late as 2004, the Horror genre was indeed waning from its twenty-year peak in the 80s and 90s, but was still selling better than regular (or general) Science Fiction, Westerns and Action/Adventure novels. But, well before the advent of the functional e-book, Horror began to slip in popularity.Today, it is scarcely more popular than the tiny (but never dead) Western genre, and is less popular than Action/Adventure and is considerably smaller than Science Fiction. 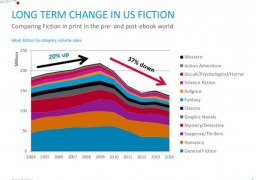 The best screen grab I could get from Johnathan Nowell’s original Nielsen presentation. Note the decline trend before the e-book was successfully introduced on a large scale.

There are a lot of factors related to the decline of horror: Stephen King passed his peak (in horror, particularly) a long time ago, seemingly voluntarily. From his accounts, he has written pretty much everything he wanted to write in the genre. Sometimes twice!

More than that, perhaps the changing nature of horror movies has impacted the appeal of horror books. Torture-porn may serve as an endurance test for visual fans of Saw and whatever way Rob Zombie murders his wife next, but it doesn’t make for a hot book. American Psycho may have sold millions in the 1990s for Bret Easton Ellis’ examination of gore and greed, but straight up horror novels themselves necessarily depend on at least as much psychological fear as they do on fancy ways to die and hurt. Perhaps there was nowhere left for horror to go.

Or perhaps, as Mike Duran argues (in small part) in Christian Horror: On the Compatibility of Biblical Worldview and the Horror Genre, the Horror genre has been abandoned by Christians and – moreover – shunned by other professing Christians who practice white magic.

Yes, you read that correctly.

Duran’s brief but well-documented treatise explores the modern horror genre through the lens of traditional Christian beliefs, of modern evangelical cultural norms, through the publishing industry, and from a philosophical viewpoint. Ultimately, he argues that the horror genre owes its vitality to religion – generally – and to the Christian faith in particular. He surveys classic films and stories, such as The Wicker Man or H.P. Lovecraft and ties insights about warring views (those of the horror creators and of the characters within horror works) of the cosmos or of faith or of reliance on nature to the visceral effectiveness of the “fear” genre.

By exploring the ghostly, the macabre, and examining their primordial origins – not in Darwinian fantasy, but in biblical history and Christian instruction – Duran goes beyond finding a compatability between the horror genre and the Christian faith, he begins to the scratch the surface of a critical link between the two.

Speaking of ghostly, Duran takes an intriguing excursion into the nature of ghosts as a physical energy construct that fits well within a Christian’s fundamental concept of the world that will appeal to both supernaturalists and astrophysicists alike. If you have enjoyed SciPhi Journal, you will find a lot of food for thought in Christian Horror.

Now, as a big fan of Danse Macabre, I would have loved to see Duran go more deeply into the themes of classic and contemporary horror novels and films, as he always finds a way to dredge up absolutely strange (yet true!) and deep nuggets in his exploration of the genre. However, the book is an efficient vivisection of the state of modern horror, as a publishing, cultural and Christian issue.

The idea that the horror genre is in freefall now due to its general “post-Christian” identity may sound preposterous – to both Christians and unbelievers alike. But Duran makes a powerful case that – despite seeming impossible – it is nothing less than the Gospel truth.