REVIEW: Fate of the Kinunir by Robert E. Vardeman 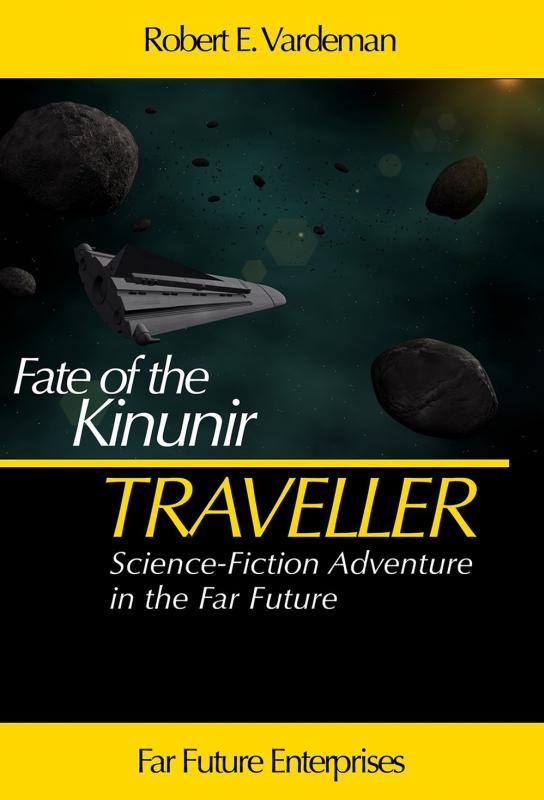 It is not much of an exaggeration to say that Adventure 1: Kinunir was for Traveller what B2: Keep on the Borderlands was for Basic D&D. The small booklet was bursting with gaming material: advice on making up skill and attribute tests on the fly, patron encounters, an elaborate rumor matrix, a complete subsector map with stats for all its worlds, and library data detailing what would be a lot of people’s first look at what would become one of the most intricately detailed settings in role playing. The centerpiece was the titular ship design, a listing of every hull of that class that was built, deck plans, and (incredibly) complete stats for every member of the 80 man crew. If you had got ahold of the three “little black books” in the late seventies, then this was your go-to resource that could show you how those rules were intended to be applied.

In practice, however, the Kinunir itself was something that tabletop gamers were unlikely to encounter in actual play. Other ships of the class were introduced via the brief patron encounters that would have been suitable for launching a campaign or perhaps running a one-shot. In one case, the players are hired to bring back measurements of the black globe fittings from lightly guarded scrap heap at General Shipyards. In another, the players are hired as escorts for a foppish nobel’s hunting expedition and then pressured to trespass onto an imperial game preserve. This is liable to result in an encounter with marines from the Luuru… and then (more than likely) to getting dropped off at Gaesh which has been converted into an orbital prison.

Of course, you don’t need to set up an elaborate scenario to get Traveller players on the wrong side of the Imperial Marines. A referee can reasonably arrange to have the player characters dropped off at that prison hulk from almost anywhere in the subsector. In contrast to this, to find the Kinunir, players have to be willing to piece together a few odd rumors, figure out a way to get into an interdicted system without being detected, and then find out where it is once they get there. Maybe the people you play this stuff with are different, but I have a hard time imagining real live gamers going in for this. If they get the idea that finding psionic institutes, becoming merchant princes, or going full on space pirate is more fun, it just isn’t happening….

Those lucky few that persevere and that turn what should be a one way ticket to the Gaesh into a successful run would have found this:

The Kinunir itself is lying derelict with computer operational and auxiliary power, but has not moved for years. Close external examination will not reveal any clue to the reason that the ship is in its present state; but a wider search will show (about 1,000 km away) a group of four of the ship’s crew caught in the gravitational field of a small asteroid. They are not wearing vacc suits, and show signs of death by vacuum.

Now, the promo copy of this ebook’s cover page proclaims that it “reveals the truth behind one of the greatest mysteries the Traveller universe has ever known.” And while I can’t tell you how pleased I was to discover that a two hundred page novel had been written expressly to explore this particular nugget, I still have to object to this. The great mysteries of Traveller are going to be more along the lines of what exactly was going on with the Zhodani core expeditions, what the Empress Wave was going to do to the Third Imperium, and how exactly it was that disruptive and transhuman technologies never seemed to upset the status quo even though there were so many rogue research stations that were up to no good…! Die hard Traveller fans are going to be more concerned with the significance of the Kinunir‘s specifications in light of the setting’s gradual shift from a crude “small ship” universe over to a High Guard style “big ship” universe than with the ship itself.

But that’s getting pedantic even for a Traveller fan. Still, the promotional gloss does in fact foreshadow more significant problems with regard to the game’s canon. In the first place, the book is loaded with Imperial Marines and not one of them wields a cutlass. Every marine in the classic game has that skill… and figuring out an explanation for why that is the case is a rite of passage for novice referees. Swordplay really ought to have been included somehow. For a sin of omission it’s still relatively tolerable; much worse is that not only does the book include laser pistols, but it declares them to be standard issue for the Imperial Navy. And this wouldn’t be so bad, but really… one of the most common complaints against Traveller back in the day was that not only could you die in character generation, but that the game lacked laser pistols! Neither of these problems is insurmountable; they could have been fixed with only minor editing. You can say that I’m petty for calling this out, but as Van Halen’s brown M&M rider demontrates… if you mess up the small stuff, chances are that you’ll have messed up the important things, too. In this case, the “important thing” turns out to be pretty much the premise of the entire book.

You see, the author has used the lore surrounding the Kinunir to tell again the same basic conflict depicted in the original series Star Trek episode “The Ultimate Computer” or in David Bowman’s fight with the Hal 9000 from 2001. Those are both titanic, mythical tales that are sure to be reworked and retold in myriad forms and settings time and again. But if they show up in the original Traveller setting, it will only be in the most understated form. There just aren’t any advanced artificial intelligence systems in the game. Indeed, the original rules indicate that the computers on starships tend to be ungainly mainframes that have a set number of 8-track type program tapes that are constantly being switched out depending on the circumstances. And sure, most people ignore this obscure and dated aspect of the game. And yes, Signal GK did introduce sentient computer chip based life forms to the game. But even then, the advantages and abilities they conveyed when installed in a ship’s computer system were extremely modest. In this book, though, we have an over the top Star Trek style “super-intelligent battle computer” functioning as a deus ex machina, doing the impossible, and generally overshadowing all the human characters when they should be doing the serious, cunning, and heroic stuff themselves.

Given that artificial intelligence was the vector through which the Third Imperium was destroyed in the New Era incarnation of the game, it’s reasonable to expect authors and editors to tread somewhat softly on this point. I mention that not reopen the old wounds of flame wars long past, but rather to make the point that limited computer technology is just as fundamental to the setting’s premise as is jump drive, the lack of Ender’s Game style ansibles, vector movement in space combat, and the whole “shotguns in space” ethos. I’m glad that these books are being made, and I’m looking forward to seeing more… but next time I really wouldn’t mind if I got one that felt more like Traveller.