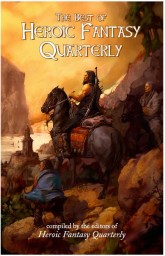 The internet has given us new venues for fiction. The publishers had turned their back on the genre but fans brought it back in a new electronic form. I can remember some early sites in the late 1990s. One had the name of “Temple of the Scarlet Salamander” or something like that. In the 00s, there were websites with Jonah Lissner’s “Viro” stories among others.

The technological changes allowed much easier book publishing putting publishing into the hands of average or not so average Joe. Pitch-Black Books brought us Lord of Sword and Sages and Swords. Jason Waltz’s Rogue Blades Entertainment had Return of the Sword and Rage of the Behemoth. Friends such as Howard A. Jones, Joseph McCullough, and John C. Hocking were attempting to keep the genre alive.

There are some online publications that have been around for five or more years: Beneath Ceaseless Skies, Sword and Sorcery Magazine, and Heroic Fantasy Quarterly.

The Best of Heroic Fantasy Quarterly Volume 1, 2009-2011 is a trade paperback that came out late in 2015 gathering some of what the editors consider the best of the online magazine. The book is 199 pages, costs $9.00 at Amazon, ten stories, eight poems, an introduction, and background piece by the editors.

The cover is by Justin Sweet that is very appropriate and rather nice. There is lot of bad fantasy art out there. Good to see the editors have good instincts.

Richard Marsden’s “Man of Moldonia” is a tale set in a fantasy Europe of the sort in Mallory’s Le Mort de Arthur. There is a light undercurrent to the story about an aging last member of a Crusading Order that eliminates dragons. There is some betrayal and turning the tables.

“The Black Flowers of Seven” by James Lecky feels like it is set in pseudo-medieval Persia close to the Hindu Kush Mountains. The wife of the king turns out to be not what his mercenary captain, Tulun thinks she is.

William Gerke’s “Monster in the Mountains” is an unabashed icky monster story. The main character, Gowther, is a little different being half-human and some sort of supernatural entity called a Lords Mutable. Gowther has great strength and endurance.

The use of a Japanese setting and samurai is a dicey thing to do. The most successful samurai story I have read was Donald J. Walsh’s “Ghoul’s Head” in Heroic Fantasy (D.A.W. Books, 1979). R. Michael Burns has a series featuring the samurai, Hokage. In “Shadows From Firelight,” Hokage must battle the supernatural entity, the Tengu King who stole the soul of his lord’s daughter in law. This story captured a fantastic Japan or seemed to.

The sword and planet entry in the book is “No Two Stones” by Christopher Wood. A first person narrative by Captain Gkurz, who appears to be an orc like Umbra minion sent to a moon by the Dark Lord to wipe out the “Loft Folk.” When it is found they are to be eliminated by the total destruction of the moon, there is a revolt. The story is on the nihilistic side for my taste.

Robert Rhodes’ “The Sea Wasp” is the obligatory pirate story with a kidnapped scholar scheming his way to bring down the captain and his evil enforcer using power of a talisman found on a funeral boat.

A quasi-Central Asian setting for Dariel R. A. Quiogue’s “Lord of the Brass Host.” A deposed khan of a steppe tribe, a double dealing governor of the Chinese stand in culture, and an army of brass warriors are reminiscent of Karl Edward Wagner’s The Road of Kings.

A polar setting by J. S. Bangs “The Last Free Bear” has an Eskimo tracking vile minions of a dark lord who have taken his wife and children. He meets up with a talking bear, the last free bear. The bear’s cubs have also been taken. They team up to rescue their families.

P. Djeli Clark is a writer I know from Griots. “Shattering the Spear” has an African setting with a tribe on the move to take out a dark lord who is causing droughts. This story is pretty blood and thunder. I notice the writers who use an African background have a retro feel, and I mean that in a positive way. Michael Moorcock also seems to be an important component in the fantasy fiction DNA of the African setting writers.

“The Baroness Drefelin” by David Pilling is almost a vignette. It has a fairy tale feel to it that makes one think of Lord Dunsany.

I really can’t comment on the poetry. I like reading Donald Wandrei and Clark Ashton Smith’s poetry but could not tell you what is good and what is bad. Cudos to the editors for running poetry and including it in the book.

So, there you have it. The book is about the right size. Modern day heroic fantasy is different from other decades. There seems to be a less hard-boiled feel in comparison to sword and sorcery you encountered in the 1970s small press magazines. But, nothing is derived from unicorns or My Little Pony.

If you have exhausted all the paperback sword and sorcery anthologies like Flashing Swords, Swords Against Darkness etc, check out The Best of Heroic Fantasy Quarterly. You never know, one of the writers might make the jump to the big publishers.