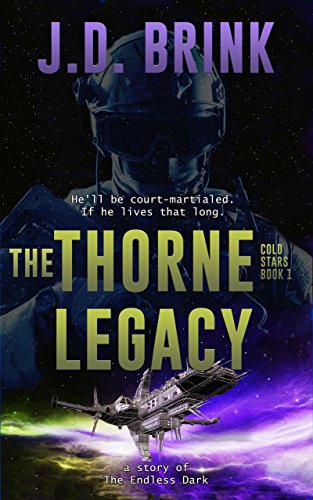 Okay, this one is very nearly non-stop action. It’s straight ahead no-frills military science fiction with alien invaders that are just different enough from the ones in the big movie franchises to keep you guessing. There are space marines. There are starships. There’s enough technobabble to make it all seem real and there’s not so much that it becomes a headache. The is pure, unadulterated entertainment with a hint that there could maybe be something more down the road.

Because this story delivers on the half a dozen things I typically expect authors to accomplish, I’m just going to home in on one aspect of this tale that stands out to me. The title references a family legacy, one that’s facing some serious trouble in the opening chapter:

“Six generations of spacefaring military officers…”
Not the Odysseus lecture again, Thorne thought. The first two ancesters in that proud line were supposedly of the Odysseus subspecies, engineered for space exploration. Even though the characteristic Thorne build hinted at the robust nature of Oddies, Cranston had always assumed that particular claim was dreamed up by his father for pure boasting rights.
The Captain tossed the green jacket to the floor. “And not only are you not an officer, but you’re not even in the System Guard Spatial Corps. Six generations of tradition and family honor, and with you the chain’s been broken. The Thorne legacy, ruined.”

Dad in this case comes off like the drill sergeant from Full Metal Jacket. Reading the exchange… I can’t help but think that it’s been ages since anyone wrote something like this.

Oh, there’s the evil undead hateful creepy monster dad in Iron Fist that drives his son to drink with his constant lectures and meddling. And that’s the thing: any sort of assertive fathering tends to be painted in a bad light these days. The “good” dads…? They’re like Barry Allan’s foster dad raising his “son” to not stand up to bullies and some such. Something like a proud legacy passed from father to son for six generations, though…? You’d practically have to reach all the way back to Jack Williamson’s Legion of Space to find something like that now.

Is it just a matter of times changing, of popular archetypes getting a well deserved rotation…? I could have been persuaded of that once maybe. After all, it’s just entertainment, right? But when the “overbearing jerkwad father berates his son to the point where he goes over the edge and kills his dad” moved from being sort of an outlier and into being some sort of stock trope, I had to wonder if maybe somebody somewhere has some serious daddy issues.

According to author John Van Stry, that is indeed the case:

The men who founded the publishing companies died, and their daughters, who they sent to ivy league schools took over and applied what they were taught there to the industry….

And with the changing of the guard, there has been a shift in the culture along with it– and the composition of the fiction market audience adjusting accordingly:

I write novels with strong male characters and boy do I get a lot of [flack] for it.

I’ve got two more I’ve promised to write in two different series, but after that, I’m thinking of doing what everyone else does and just write strong female characters, really strong, UBER strong. Stronger, smarter, faster, better than all the men, who they constantly show up, and who all worship her.

Because that’s what sells. In droves. Women want it, and at this point the minority of readers who are men are used to it enough, that they’ll still buy it, as long as the story as good.

So men drifted away from reading over the years. This created a very real financial incentive for authors to produce certain types of stories, regardless of the dictates of the big brand editors and publishers. Anyone that failed to go with the flow…? They not only made less money. They were singled out for flack.

This has by now gone on so long and so completely that we are long overdue for a market correction. But really, there’s only so long that an “industry” can stand to tell forty percent of the market place to simply buzz off. Change is coming, but it won’t be from within. The real work of turning things around will be done by the sort of independents and amateurs that wouldn’t have had a place in the old order. Literary barbarians as it were.

Consciously or not, J. D. Brink is a part of that new wave. He’s taking the sort of chances that you won’t see trickling up to the television and movie studios for a long time. And it isn’t some sort of testosterone laden punch to the face, either. It’s just a break from the unending parade of ninety pound girls beating the tar out of three hundred pound dudes. It’s not some aggressive counter-ideology looking for a chance to take the reins of culture. It’s a return of stories featuring tough (but likable) dads that deserve some respect and sons that you’d want to see go out and earn it.

Is that really some sort of earthshaking radical concept…?

Actually, right now in science fiction and fantasy scene… it really is.