REVIEW: Under a Graveyard Sky by John Ringo 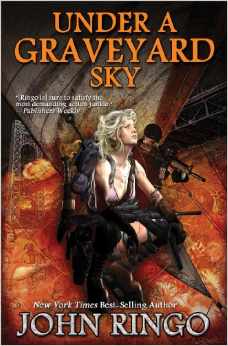 There are at least two axises on which we can categorize books: serious vs fluff, and well done vs poorly done.

If a novel is poorly done, it doesn’t much matter what it attempts to do: it is a failure. (Although the topic of what makes a book either a success or a failure is a complicated one; that’s a topic I hope to dig into over time as these reviews continue).

Today, though, I want to speak about serious vs fluff. Lord of the Rings is serious. The Sword of Shana is fluff (it is also poorly done , but that’s not relevant). What makes LOTR serious while SOS (and, yes, someone please send help ASAP) is fluff? Intent, complexity, characterization, congruence between aim of the novel, tone of the language, originality of the world, nuance of the characters, depth of the moral code, etc.

Tolkien scores on every criteria. The point of the novel is to explore the battle between good vs evil. The characters are complex, real, and conflicted. The tale has as its purpose to explore what moral behavior constitutes – even among us tiny non-famous people – can do in the real world , and there is perfect congruence with the characters in the book and both the seriousness and silliness of the language they use. The world is stunningly original (a fact that may not be aparent after half a century of derivative works – one is tempted to say “Middle Earth is just like every other fantasy novel”. Indeed. This is not a failure in Middle Earth!). The moral code of Tolkien is woven through every decision, every moral choice made or left unmade by his characters.

(As a side note: it is not a criterion that establishes seriousness, but the amount of effort spent on a work tends to correlate. Tolkien took more than a decade to write LOTR – only 125 polished words per day.)

We need not be overly analytical about serious vs fluff – once one has decided to pay attention to the topic, it is obvious. China Mieville’s “The City and the City”: serious. “Red Shirts”: fluff. Ken Macleod’s “Fall Revolution” series: serious. Brenda Cooper’s “The Creative Fire”: fluff.

Ideologically, John Ringo is a member of the Good Team.

I can think of few better people to share a foxhole with (either a metaphorical one in a culture war, or a literal one in the other kind).

That said: Ringo’s stock-in-trade is fluff.

This is not to say that he’s a bad author. In fact, the opposite is true: he is a very skilled author. I have never read anything by Ringo that did not live up to the promises made on the back cover.

…but that said: fluff.

The answer is the same as “is beer bad?” or “are hot dogs bad?”. Either can be delicious, and really hit the spot on occassion. …but a diet made up of only fast food an alcohol is best left to the subjects of Dalrymple’s rants – it’s not a good way for us to live.

So as fluff, how does it do?

Under a Graveyard Sky is the initial book in the Black Tide Rising trilogy. The topic is "scientifically possible zombie outbreak". The viewpoint is primarily from one hyper-prepared family: Steve Smith. And this is where the Mary Sueing and the industrial quantities of fluffiness start. I accept that utterly typical powerless viewpoint characters are sometimes underwhelming (although no one diss on Sam or Frodo in my hearing). But to go to the other end of the spectrum risks problems as well. When, on page 2 or so, we learn that not only does ex Special Forces soldier Steve Smith have a family playbook of emergency preparedness, but the book contains a special code for zombie uprising, I felt the first sigh escape my lips.

A few pages later where we learn that his wife is smoking hot, and just as toned now as when she was 25, I sighed again.

And when I learned that his 13 year old daughter was more calmly self-possessed than most hardened military veterns three times her age, I sighed a third time. Oh, and she's a crack shot. Fourth time.

The book moves along with snap and verve: the apocalypse is in full swing within a few chapters, and our heroes take to the high sees to ride out the plague. The "B" thread, where we see the classified biowar labs that are trying to crack the zombie plague and develop a cure is interesting.

In short order the apocalypse is total: 99.9% of the Earth's population has zombified and the Smith family start trying to rescue humanity by finding other small ships on the high seas and searching them for survivors…often sole survivors locked inside cabins against the zombies that roam the ships.

As I said: Ringo is a good author, and he always delivers what he's promised. So if you read the back cover and say "You know, I could really go for a pretty unrealistic tale about a hyper prepared family – including a bad ass 13 year old girl – surviving the zombie apocalypse on a boat", then you will be utterly satisfied.

I picked up the book, took Ringo at his word, handed over my cash, and was happy with the transaction. It was a fun diversion for a few hours, and I was burned out and tired from work and other stress. Some men turn to loose women, other to bourbon, I turned to Ringo.

So on that score: this book is a solid B or B+.

Then again, I was recently at a bookstore and picked up the sequel and read the first 30 pages over a coffee.

…and then put it back on the shelf.

Having cotton candy once a year at the State Fair is a fine thing.

Having it every single week is not.

Prose (7/10): Ringo can tell a rip roaring tale. He does not, I believe, edit or write a second draft, so phrases get reused a bit too often.

Characters (3/10): Mary Sue characters straight out of a "all my character stats are 18!" gaming session.

“Just concentrate on getting us to the middle school intact,” Steve said, consulting his smartphone. He pulled up an app and punched in certain parameters. On the third hit he’d found what he was looking for and dialed a phone number. “Hello? My name is Jason Ranseld with the Aurelius Corporation. We need to rent a boat matching the parameters of the one you have for sale. Is there any way that we can get a two-week lease? No? We’d consider buying if we could talk about the price. And I’d need to look it over…Would Saturday afternoon work for you? This is a snap-kick for a major client . . . Of course, three would work perfectly…Thank you, I’ll meet you there . . .”

“I got all of that except latent and hostile…Wait! Zombies?”

“Something similar,” Steve said as they pulled up to the fortunately close middle school. “Cell phone.”

“Cell,” Steve said, pulling a burn phone out of the bag. “This is your new one. Only the numbers on contact list.”