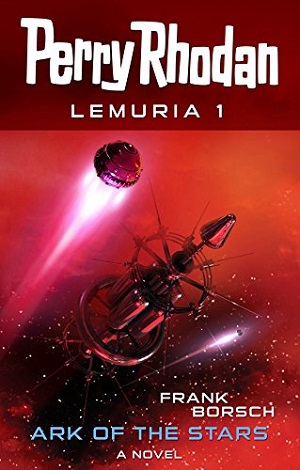 This article was originally posted on 1 March, 2020.

At over 3000 novellas and nearly 1500 novels and spin-offs, the Perry Rhodan series is the longest running science fiction serial. For fifty-nine years, these adventures have followed the eponymous American astronaut to the moon and beyond. With amazing adaptability, quick wit, and dry humor, Perry Rhodan united Earth and led humanity across the stars. Despite its international popularity, precious few of Rhodan’s adventures have been translated into English. (For a quick overview of the publishing history of Perry Rhodan, please check out both Kevyn Winkless’s introduction to the series and the comments). However, in 2015, the complete six novel Lemuria series was released in English as ebooks, representing the first new English Perry Rhodan adventures in almost twenty years.

As always, there is an asterisk to such a sweeping statement, as 2015 was the second publication of books in the Lemuria series. Ark of the Stars, by Frank Borsch, was first published in English in 2006, but those few lucky readers to purchase it would have to wait until 2015 for the rest of the story.

Published in German in 2004, Ark of the Stars leads the third set of self-contained Perry Rhodan novels published by Heyne-Verlag. While the adventure would fit snugly in between volumes #2200 and #2364, the Lemuria novels would also shed light on the ancient galactic civilization of Lemur, founded on the mythical Pacific continent of the same name. For Perry Rhodan’s Terrans are not the first wave of human settlers from Earth in the galaxy, and many of the star nations in the Milky Way trace their ancestry to the upheaval and fracturing of Lemur’s empire. Of these, the Akons and their allies have clashed repeatedly with the upstart Terrans and their claims to succeed Lemur. This fierce rivalry would define the galactic history of the “Perryverse” for over 2200 years–and beyond.

Ark of the Stars takes place in one of the lulls in the clashes between Terrans and Akons, where the main competition in the galaxy is no longer war, but exploration of the few remaining frontiers in space. Perry Rhodan hitches a ride on the mining ship Palenque as a cover for a diplomatic mission to Akon. But his mission is disrupted when one of Palenque’s shuttles suddenly vanishes, smashed into dust by the relativistic wreckage of a shuttle matching no known design and with markings written in ancient Lemurian. After tracking the trajectory, Rhodan and the Palenque discover a 50,000-year-old generation ship from ancient Lemuria fleeing from a race known as the Beasts. Rhodan also finds an Akonian cruiser who is willing to enforce Akonian claims on the relic spaceship.

Meanwhile, aboard the failing generation ship Nethack Achton, Denetree is a fugitive. Her star-mad brother pirated a shuttle in defiance of the generation ship’s laws. This act of rebellion led to the death of 43 peace officers and the loss of irreplaceable air and resources (as well as the later death of a Terran mining shuttle’s crew). The Net demand justice for the traitor’s actions, which means death for all of his friends and family. The Net’s search tightens slowly around Denetree, until strangers appear without warning aboard the Nethack Achton. Will these strangers rescue Denetree or are they Beasts come to destroy the last known Lemurians in the galaxy?

And, unknown to all, the chance meeting between Terra, Lemuria, and Akon will awaken dangerous threats and an ancient foe.

For a novel bearing his name, Perry Rhodan avoids the stage in Ark of the Stars. Denetree and various Palenque and Akonian personnel are the viewpoint characters throughout the novel. Their various expertises provide the basis for the exposition needed to fill 50,000 years of history. Rhodan provided the right input at the right time to cut through the various impasses, thanks to his ability to think just a little faster than most. His legendary status as one of the few Immortals in the galaxy also makes him a measuring stick against which the captain of the Palenque consistently measures herself against. His dry humor is often the only bridge across the remove he keeps between himself and the crew.

Denetree serves as the reader’s eyes into a slowship that has yet to devolve into the generation ship horrors explored in Galaxy’s Edge: Imperator and Gods and Legionnaires. Although such suffering is around the corner as machinery breaks, resources become increasingly scarce, and genetic damage accumulates. Her flight is not her choice, neither is her protection, as she is adrift on the winds of other peoples’ whims. There’s not much to her character except a shocked woman caught up in grief and terror. Yet, without her viewpoint, Ark of the Stars would lack the human drama to what is essentially an archaeological mystery.

The English translation of Ark of the Stars is well-done, reading like contemporary American science fiction novels in style and vocabulary except in one vital way. Ark of the Stars is optimistic space opera written at a time when much of science fiction was turning grim. Like in Valerian and Laureline, there is a belief that through reason, understanding, and negotiation, a better outcome can be made–although blasters are ready if needed. So far, the soft power approach has worked for the Terrans of Palenque, even if the magic of friendship might occasionally require unorthodox methods such as booze, blunts, and air guitar. (Battlestar Galactica was not the first science fiction series to use “All Along the Watchtower” as a story device.) But as ancient Beasts reawaken, will the Terrans continue to rely on such methods or will they meet force with force?

The self-contained format helps make the sudden plunge into the Perry Rhodan universe navigable. Hundreds of stories separate the Lemuria series from where Wendayne Ackerman last translated the series. In that time, Terran rose to a superpower and declined to one among many. Ark of the Stars does grow a bit exposition-heavy as it explains the important twists in galactic history, but it never overwhelms the reader nor grows tangential. While my appreciation might be greater if  had read any of the preceding 2200 issues, I never felt lost in Ark of the Stars for jumping straight into the Lemuria series without any prior Perry Rhodan readings.

At the end, there are enough hints at the mysteries surrounding the launch of the Lemurian generation ships to keep my interest in a series that bears many similarities so far to Doc Savage in Space or a pulpier Count to the Eschaton. Thankfully, there are five more books in the Lemuria series for these strands of mystery to grow and bear fruit.