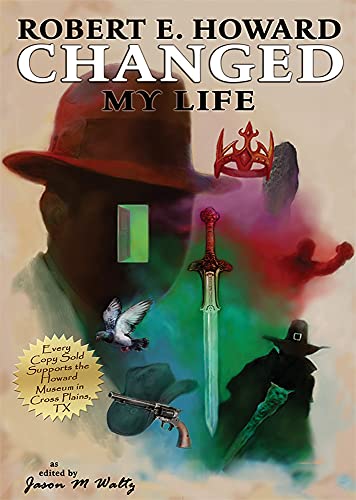 Meditations on Middle-Earth was a collection published in 2001 containing essays by authors on the personal impact of J. R. R. Tolkien. Contributors included Poul Anderson, Harry Turtledove, Charles de Lint, and Ursula K. Le Guin. It made for an interesting niche book reading on the impact the Oxford Don made on generations of fantasy writers. I enjoy reading personal stories on the profound impact of authors and musicians that lead to the creative impulse.

Robert E. Howard Changed My Life: Personal Essays about an Extraordinary Legacy is a forthcoming collection of essays on the personal impact of Robert E. Howard from Rogue Blades Foundation. This book was originally scheduled for publication in June 2020 but delayed when Howard Days was cancelled due to the Bat Soup-Flu.

The book contains 32 works of non-fiction and one introduction for a total of 199 pages. The book can be divided one way into published authors and fans. It can be divided a different way into general personal memoirs on discovering Robert E. Howard, others are more focused on specific characters.

The first piece “How Robert E. Howard Saved My Life” by Bill Cavalier first ran in The Cimmerian V3n6 #17 (June 2006) which was popular with readers:

“Conan the Adventurer was the title, and it wasn’t so much that I spied this book as it just leapt off the shelf into my hands. The cover artwork was unbelievable! It showed an incredibly muscular, tough-looking Tarzan wannabe, wearing a loin cloth and a knife, holding the pommelof a sword sticking in…What?…a pile of bodies?! Ghostly scary skulls floated in the background, and—Holy smokes!—there was a naked woman grabbing onto his left leg! Conan liked to fight and kill monsters and chase women and drink.”

“Here was all the fierce clash of qualified good and nigh unqualified evil I’d glimpsed in Sergio Leone’s film, but featuring a literally unforgettable hero.”- John C. Hocking.

“Here was a barbaric hero cut from the same cloth as Conan—later I realized Kull, of course, was in some ways the original version of Conan—but cast of an entirely different temperament.”- Jason Durall

“West Texas is, for me anyway, as bleak as an invitation to a hanging. Especially where Howard had been born and lived until his unfortunate suicide. Look out at that landscape from day to day, and a pistol might seem a logical conclusion.”- Joe R. Lansdale

“This was a different sort of heroic fantasy—darker, more sexual, more problematic. But the language spoke to me, called to mind the same stuff I had read by Sir Walter Scott and Alfred Lord Tennyson. Rich, dark prose, drenched in the Weird”- Jaym Gates

“I think this is something which many of REH’s imitators fail to take on board. Too many have attempted to ‘be’ Robert E. Howard and mimic his style, often disastrously.” – Adrian Cole

“That sense of mystery haunts me to this day. The notion of fallen civilizations sent me into landscapes all over the world, wandering among ruins, and in those ruins, why, my imagination simply catches fire.”- Steven Erikson

“It did, however, indirectly lead to my next novel for Zebra. Karl did not turn in a manuscript for Queen of the Night, so Kirby convinced Roberta Grossman to have Dick Tierney and me collaborate on finishing For the Witch of Mists. Which more or less segued into the idea of our doing six Red Sonja novels.”- David C. Smith

“Of course it’s not a healthy reaction to cover up one’s own sense of alienation by rejecting other women for being different from one’s self. But the mental logic of being ‘not like other girls’ is understandable.”- Karen Kahoutek

“Depression is a word that’s often miss-used and misunderstood. It isn’t the same thing as simply feeling sad, which is how those who haven’t suffered the affliction often believe it to be. Depression is an all-consuming blight that settles upon a person, binding them in a mantle of gloom.”- C. L. Werner

“The myriad little things that go hand in glove with the act of caring for another human being during their last days. It consumes you, this caregiving. You know you cannot stave off the inevitable, but you can make the inevitable more comfortable for the loved one going through it.”- Scott Oden

“Forty years ago, if I’d been told Conan the Barbarian would become so integrated into the pop culture at large that he would inspire video games, cosplayers, and memes (once you explained what cosplayers and memes were to me), I would have laughed like a loon.”- Nancy Collins

“The particular mix of 1930s racial fear and lingering shadows of World War I during the interwar period that gave animation to the Colonialist fantasies of white people versus everyone else.”- Bobby Derie

“Robert E. Howard did not—could not—tell stories from an emotional and intellectual distance. He had to ‘mentally inhabit’ not only the world of the story, but also the emotional lives of the characters.”- Russell E. Burke

“One of the biggest problems I had with Dark Valley Destiny (aside from the tone of the book) was the absence of anything resembling the Texas where I’d spent my whole life.”- Mark Finn

“Yet the strangeness of the time and place of my encounter with REH’s fiction had an impact. I knew I had traveled to a very far place, but even in the middle of spies, Oriental merchants, and Tamerlane’s handiwork.”- David Hardy

“I became the proud owner of my very own Mike, an all-white pit bull my soon-to-be-wife and I named Kull. Kull and I became inseparable, close in a way that both surprised and pleased me.”- Chris Gruber

“You have to understand, being a girl in the 1950s was a complete dead end. I couldn’t do anything. I couldn’t play Little League or football; I couldn’t even play full court basketball.” – Cecelia Holland

“The black-haired, blue-eyed Gaels, much alike as they are physically, show greater variation in character and personality than they sometimes receive credit for.”- Keith Taylor

“In my mid-twenties a well-meaning friend loaned me a Conan collection I promptly bounced off of because by sheer chance the first story was one that remains among my least favorite of all his yarns.”- Howard A. Jones

“When I saw the first Conan paperback, my eyes were drawn—as they were meant to be—by Frank Frazetta’s stunningly savage cover.”- Roy Thomas

“On the spinner rack in the drug store, I spotted a likely looking paperback titled Swords & Sorcery, edited by L. Sprague de Camp (Pyramid Books, 1963). I was already a confirmed Edgar Rice Burroughs fan, and this looked like an anthology of stories along the same line, with the slight difference that here the swords were matched against sorcery, not Martian super-science.”- Fred Blosser

“There was the Rankin-Bass animated adaptation of The Hobbit (1977) that had a profound impact on me when I was five years old.”- Jeffrey Shanks

“The cover in question sported a blue-skinned, naked woman lurking above Conan, who wielded a sword and knife beneath her, while some sort of werewolf threatened him from below.”- Deuce Richardson

“The first time I tried to run away from home I was thirteen years old. There was no denying it was a pathetic attempt.”- Becky Cloonan

“I found a way out of this joy-infringing unpleasantness through books. I remember that the very moment I could read I had books in my room. Adventure stories, many of them written by German author Karl May whose work shows astonishing similarities to Robert E. Howard’s stories, took me to places far away.”- Dierk Gunther

“I read everything from Edgar Rice Burroughs to Robert Silverberg; from J.R.R. Tolkien to Lord Dunsany. And I also devoured the requisite canon read by young blacks at that time, works such as Richard Wright, James Baldwin and Zora Neale Hurston. In the mid-1960s, though, a certain writer’s work jumped out at me and grabbed me by the throat. That writer was a long-dead pulpster named Robert E. Howard, whose fiction was being revived in paperback with eye-catching cover art by Frank Frazetta.”- Charles R. Saunders

“No Howard character ever changed my life. Actually, a few of them—especially Conan—made my life much more difficult.”- Patrice Louinet

Rogue Blades published one of my favorite original sword & sorcery anthologies – Return of the Sword. I like Rage of the Behemoth almost as much. Writing Fantasy Heroes is a great non-fiction guide on writing fantasy fiction. You can preorder Robert E. Howard Changed My Life before the book goes live on June 11th. 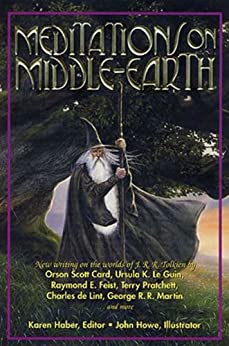