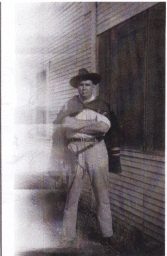 Today is the 111th birthday of Robert E. Howard. Born in Peaster, Texas and lived in Cross Plains for his adult life. He died too young at age 30. There are three transformational writers for fantasy fiction of the 20th Century: Robert E. Howard, H. P. Lovecraft, and J. R. R. Tolkien. Almost all fantasy written after these three bear the imprint of one or all.

Robert E. Howard is generally acclaimed as the founder of sword and sorcery fiction. Sword and sorcery is the punk rock of fantasy. Howard is also often credited with creating the weird western though there were others in on the formation of that niche genre.

Howard’s influence was present after his death in 1936 in the pages of Weird Tales when others such as Henry Kuttner and Clifford Ball wrote sword and sorcery stories. In the 1940s, Howard’s influence could be found with Frederic Arnold Kummer, Jr., Leigh Brackett, Gardner Fox, and Bryce Walton. Even in the early 1950s, a young Poul Anderson was writing Howardesque stories (“The Virgin of Valkarion”). Gardner Fox wrote the first sword and sorcery comic book story with “Crom the Barbarian.”

The issuing of the Conan stories in paperback in the 1960s set off a sword and sorcery explosion. Characters influenced by Howard including Kothar, Brak, and Thongor not to mention a number of one shot paperbacks with covers painted by Frank Frazetta and Jeff Jones competed on the spinner racks against those science fiction paperbacks with Richard Powers covers.

Imagine a world without Robert E. Howard. E. Hoffmann Price wrote that Conan saved Weird Tales. Weird Tales might have died in 1933-34. That means Ray Bradbury’s career might have been delayed at minimum two years if not longer. You also don’t have the stories that 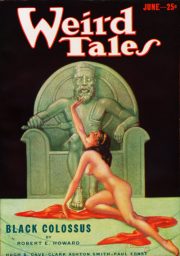 comprise most of Dark Carnival/The October Country. You have no market for young Robert Bloch. Potentially, no Psycho.

You might not have Arkham House which preserved the best of Weird Tales. Horror might have remained a semi-forgotten genre without those reprints in the 60s. No Stephen King submitting to the Robert A. Lowndes magazines in the late 1960s.

Fantasy itself would distinctly European without Howard’s hard-boiled influence. Remember, that Michael Moorcock created Elric as a sort of anti-Conan.

What would be the effect on gaming including Dungeons & Dragons? Would there have been enough critical mass of fiction as ingredients in role playing fantasy gaming?

The Robert E. Howard influence has been percolating under the radar for a while in media. Of course, you have the Marvel comic books. The first T.V. show I can think of with Howard influence is Thundarr the Barbarian, which cynically combined Star Wars and Conan. You had the sword and sorcery movie boom of the early 1980s: Conan the Barbarian, Sword and Sorcerer, etc. Even now Son of Zorn has a character broadly derived from Robert E. Howard.

Think of all the custom vans from the 1970s with Frank Frazetta and Boris Vallejo art on the side panels. Heavy Metal album covers would be much different if not for Robert E. Howard. 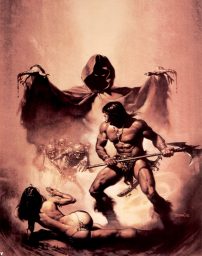 Howard effected a fictional revolution. You did have sword and planet fiction, an influence on him but with courtly John Carter with his Victorian mores. If you had a barbarian of any sort, it was generally a good natured Viking. Howard did his own thing. You never had Celtic warriors in popular fiction (or that I can think of) until he came along. Celts were those drunken Irishmen down at the saloon, they were not the stuff of heroic action. Until Robert E. Howard.

You did not have the mix of dark magic with the action. Edgar Rice Burroughs did some pseudo-science but none of the soul blasting supernatural stuff that Robert E. Howard entwined in his fiction.

There was an evolution in his fiction. From his first story, a cave-man story, to those of Celts and Picts in pre-Roman Britain, the philosophical and somewhat passive Kull, a barbarian from Atlantis, ruler of Valusia, the avenging Solomon Kane, finally the refinement with the wandering, good-natured rogue, Conan of Cimmeria where Howard fused the action of the historical adventure with the cosmic horror of H. P. Lovecraft. He had created a new type of popular culture hero to stand along Sherlock Holmes, Superman, and James Bond.

So raise a pint of ale to the memory of that lost soul today and maybe read one of his stories. 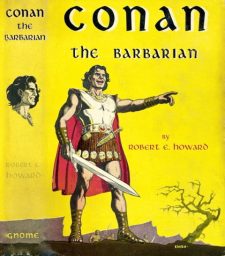