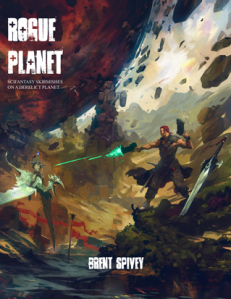 Every miniature wargamer well knows the thrill of the hunt for the illusive “Perfect Skirmish Game”.  While the bulk of the sci-fi wargaming population contents itself with the 40,000-pound gorilla, or chases the latest big-box set with a two-year lifespan from one of its challengers, some of us are content to noodle around the edges and experiment with small press titles geared more towards elegant rule systems than rules written to sell models.

The latest such book to cross my path is Brent Spivey’s, “Rogue Planet“.  Although a slim book, the rules as presented feature an oddball collection of gimmicks, each of which would make for a fine addition to a more traditional rule set.  Taken together, the results are an odd goulash of quirky rules that shouldn’t hang together as well in practice as they do.  Fortunately, Spivey understands how steep a learning curve he has built, and the rules are presented in a non-traditional layered manner that walks the reader through how the game works one unusual system at a time.  Unlike many rule systems, this one forces the player to read through the book at least twice prior to play, mainly due to how the various systems weave together to form a cohesive whole.  For me, that moment when everything finally clicked into place didn’t happen until I sat down to price out a pair of matched forces, and when it did I wasted no time in setting up a research complex off in the woods for them to fight over…

In the first fight, the forces of the Prang have finally cornered Darth Vadorc in his reclusive laboratory.  If they can kill Darth Vadorc, they win.  If he gets off the table, they lose.  The scenario, diced for at random among a short list, provides a basic set-up, but one that breaks from the normal line-’em-up and shoot.

It also leads to the first quirky rule of “Rogue Planet”, pawns.  The leaders of both forces are accompanied by two minions, each of which serves only as a ‘power-up’ for the boss.  The leader of the prang, above, has two minions.  One provides secure comms that allow him to issue orders to any figure on the table.  The second is a tech that gives him a bonus in combat.  Darth Vadorc, below, is accompanied by two bodyguards who can be sacrificed to prevent his death in melee.  Unlike the other figures, they have no attacks, are unaffected by terrain (they just follow their boss around), and do not offer cover.  They are really simply visual indicators of his special powers that can be targeted in combat and thus allow the leader to be stripped of his special abilities.  In this manner, they also serve as extra damage counters.

Figure profiles in “Rogue Planet” have a core four stats which define the usual parameters – how good the figure is at shooting, or fighting, or avoiding damage, or surviving when damage is taken.  Special abilities arise from the equipment list.  You’ll note that movement was not listed.  “Rogue Planet” figures can move as far as they want, and shoot as far as they can see, in a straight line.  This obviates the need for rulers, which is a welcome omission as it limits the potential disruption of negotiating whether a figure really can shoot that far or move that far.  If he can see it, he can do it.

The basic game mechanic is a 2d10 roll made against a static target number.  A 10 or greater results in a full success and a 7 or greater a partial success.  When shooting for example, this can mean the difference between forcing a target into cover and forcing a target to save versus damage.  In melee, it can mean the difference between wounding and killing your enemy.  The, “Yes, but”, nature of this mechanic adds to the complexity of the game without adding to the complexity of the rules.  It’s quirky, but it’s elegant.

To complicate the skill checks, Spivey adds the concept of the “Rogue Dice”, which is added to the 2d6 roll, and on a success where the Rogue die matches one of the other dice, special effects are triggered.  A sniper might one-shot a powerful foe.  A power-sword might sever a foe’s limb.  A spell – yes, this is a space fantasy game with Force-like powers suitable for your space wizard figures – might have increased power.  On the other side of the coin, the Rogue Dice can be forced onto a roll with negative effects should it match either die in the 2d6 skill check.

Which brings us to the concept of the active versus inactive player.  The game’s turn sequence is a dice-off for initiative with the results of the roll serving as the Action Points available to each player.  Whoever wins nominates a figure to take an action.  That action can be interrupted by the opposing player at the cost of one of his AP.  These interrupts (e.g. counter fire, dodging missile fire, or casting a counter-spell) force the acting player to make his skill check using a “Rogue Die”, and if the Rogue Die matches one of the acting player’s dice, then the reacting player succeeds in his interrupt (e.g. the shooter takes damage, the dodging figure succeeds, or the spell is negated.)

Then there’s the concept of “Energy”.  The term is vague, and the justification left up to the players.  It might be spice, or The Force, or even something more mundane like tiderium crystals.  However you justify the stat, energy is a measure of how much influence fate can play over the game.  Depending on the skills and equipment on the table, the player can hand wave away a certain number of negative dice rolls.  Each point can be spent to save a figure from harm, but energy is hard to come by, and players are forced to make the trade-off between spending energy early to preserve their forces or saving them for critical junctures.  It’s one more variable to track in the game, but it’s so vague and the numbers so low, it adds a richness to the game all out of proportion to the complexity it brings.

If that description seems messy, that’s because of the way all of the rules hang off of, and depend upon, all of the other rules.  It’s clumsy and awkward in the explanation and easy and elegant in the execution. 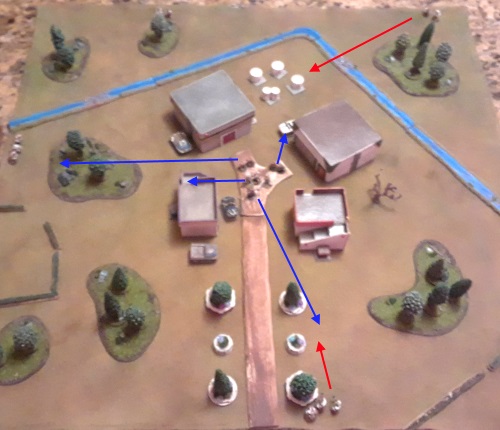 Here we see the Prang launching their raid on Darth Vadorc’s compound.  Having triggered unseen alarms, they encounter not a sleepy little laboratory, but a fully alerted compound.  The Prang are no match for their foes individually (having lower stats across the board), but they outnumber them and thanks to their leader’s communication device, they can move and fire en masse compared to their plodding targets who are forced to activate one at a measly time.

Despite having surprise and better leadership on their side, the Prang have only enough time to get into cover (as shown by the red arrows) before Darth Vadorc and his men respond and open fire.  (Translation:  The Prang could not win initiative in the game and spent the whole time reacting to the forces of Darth Vadorc – not critical in most scenarios, but devastating for ambushers in this one.)  While the troops on the north side of the table exchange heavy gunfire, the two leaders run headlong for each other in a winner-take-all fight to determine the outcome. 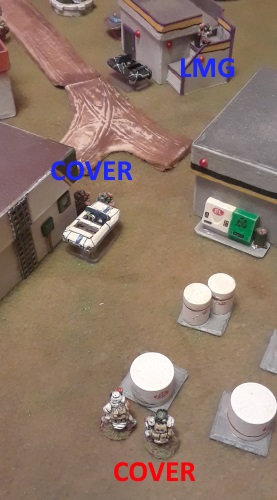 These two Prang didn’t last long against that squad support weapon – just long enough to ensure their boss had a free run at Darth Vadorc. 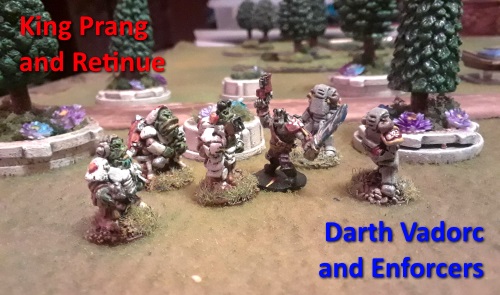 After a few rounds of ineffective shooting, the game boiled down to this one fist-fight.  Darth Vadorc entered the ring as an underdog stat-wise, but more than made up for that with his two enforcers and power sword.  The former kept him alive against a superior fighter long enough for the latter to trigger its special “Decapitate” effect, thanks to a lucky break on the Rogue Die.  With their leader dead and Darth Vadorc escaped off the table, the rest of the Prang high-tail it for home, where they regret to inform their superiors that Vadorc remains at large.

It’s a strange sort of system, the network of interlacing rules presented in “Rogue Planet“.  It takes some time and reading, and even a little bit of playing, to wrap one’s mind around them fully, but they work well in practice.  Every turn forces players to make sacrifices, weigh options, and pay attention to their opponent, because you never know when that Rogue Die will change everything!

If you’re looking for a quick playing set of sci-fi rules that will allow you to recreate your favorite sci-fantasy setting, and you’re not afraid to put some time into understanding a number of different systems at once, this might be the rule set for you.