I am discovering that the keeping of secrets to hide shame is poison, and I am trying to recover from the echoes every day. You can too. I have learned it was not my fault when it happened and it is not your fault either. Free yourselves. – Mark Greyland

The final installment of this feature is devoted to something to often buried in the roar of denials and accusation: the victims.

A very small number of the hundreds of past victims have come forward with the truth. 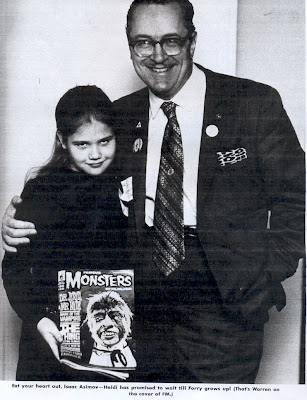 Heidi Saha, with the editor of the infamous An Illustrated History of Heidi Saha,  Forry Ackerman, at Lunacon 70.

As a child, Ken Smith was molested by Walter Breen multiple times and reported it to the police when questioned, thanks to the accusation of Moira Greyland, Walter’s daughter. As an adult, Ken Smith continued a lawsuit against Breen (then his estate), Marion Zimmer Bradley and Elisabeth Waters that had been begun on his behalf by his mother. When of legal age to do so, Smith made his case and identity public. A settlement was reached in his favor against Bradley and Waters two years later, a month before Bradley died of heart attack.

Victor Salva’s most prominent victim responded to his abuse with a brave and public counterattack on Hollywood powerhouse Disney, who greenlit and backed Salva’s SF film Powder, about an abused “special” boy who “heals grown ups with a touch.” The powerful studio was undeterred, and Salva would go on to direct the teen slasher series Jeepers Creepers. But had Winters not spoken out, Salva would not be on the public radar as a known predator.

“I needed to face this. I’ve lived through years and years and years of pain and trauma. I’m being healed daily: It’s unreal the amount of stuff that’s built up all these years that’s starting to be released. But it doesn’t work like, ‘Boom! — I’m OK now.’ ” Nathan Forrest Winters, 1995

Another victim of Bradley and Breen was their own son, Mark, and although he values his privacy intensely, he was willing to come forward with a few important thoughts, including:

“My sister has been exceedingly brave in admitting to details of what happened to her. I am not so brave, the words themselves are coals on the tongue. To speak them is to be burned by them. If I leave out details it is because I mean to. Too much of my past is alive in my head to be able to share it. If you do not know you will sleep better at night. Sometimes I write poetry to paint the shadows of memory obscuring the light of day. That is more than enough.” – Mark Greyland

Another victim of pedophilia and science-fiction fan named Andrew also questioned the noisy silence of Science Fiction leaders on the issue, who, following the explosive revelations of the Breen, Bradley, Waters cover-up and the Kramer sentencing, preferred to express childish and displaced rage once again into “safe” political screeds tangentially related to abuse.

(Note: the below originally appeared in the comments at Jim C. Hines’ blog, and was republished at Larry Correia’s site, so those are the “Jim” and “Larry” he references. It is not without some irony that the man being rightfully and righteously accused of unreasonable silence on the problem of pedophilia in science fiction (Jim Hines) is himself a rape crisis counselor.):

I’m trying to think of a way to say this that isn’t going to either sound like I’m an MRA or that I’m trying to invalidate the good work you do with other survivors. But I really think the way this issue has become political and how I see you contributing to that is really… uh… not okay.

I think you’re probably a good dude. I can’t imagine you not being a good dude given the amount of work you do with survivors and the depressing toll I know that work takes. BUT (I know you were probably sensing a but, and I’m sorry to have to do this in a thread where you’re already taking a pummeling) I’m going to step on your toes a bit here.

I’m doing it because I think you’ll listen and because it needs to be said.

Why are you focusing on Larry Correia?

I just don’t get this.

But why is Larry Correia a target?

I don’t agree with a lot of what Larry has to say, but I’ll be honest and say I still like him. He reminds me of a couple of uncles I have and some friends I used to argue with at a couple construction jobs I had. He’s really loud and says some shit I don’t agree with but you also see him actually trying to help other writers and doing stuff for charity all the time.

So, I get that you guys have serious disagreements. I get that he’s called you names. You feel attacked and that makes sense that you’d want to focus on him.

BUT (and this is what’s bugging the shit out of me): The community just found out that Marion Zimmer Bradley was a child rapist. As in, she raped children. She put her hands on kids. I’ve just found out that the community knew she was a procurer and turned a blind eye to child-rape for decades on top of all of that. And no one talks about it.

No one in the community who usually talks about this stuff is talking about this.

I was five when I was victimized. That story hit me right in the guts. I figured I’d see everyone talking about it, trying to do some agony origami and figure out what to say about it that might bring some kind of useful awareness to the community. The silence has been deafening.

I get that Larry is loud and he says things that people don’t like. But maybe fandom needs a voice like that? Before you disagree, Larry’s website is the only place I’ve heard anything even WHISPERED about Samuel R. Delany. I can’t quite seem to figure out why that is.

Samuel R. Delany was just honored at the Nebulas and quoted in NK Jemisin’s speech (I agree with a lot of what she has to say, but I just don’t get how this isn’t at least being pointed out) and Samuel R. Delany outright without any kind of doubt or apology speaks up for NAMBLA.

That’s so fucked up I don’t even have words for it.

Look at his Wikipedia page. If you can stand to do it, go to NAMBLA’s website. They quote him right goddamn there.

It is not okay.

I’m hoping you didn’t know. I’m hoping NK Jemisin and K Tempest Bradford and Mary Robinette Kowal don’t know. I saw everyone tweeting happily when he won his award. Because if you guys all know and aren’t saying anything about it and maybe even turning a blind eye because it’s really hard…

Well, I’d even kind of get that.

People talk a big game until that stuff is at their doorstep and then it becomes really easy to look away. We’re all human. No one’s invincible or infallible.

This is about the ugliest thing you can look at as a person.

But it’s still not okay.

I know none of you are under any obligation to condemn Samuel R Delany or Marion Zimmber Bradley. But when you’re going to start attacking people and you choose Larry Correia….

Of course, Mark Greyland’s sister Moira has rightfully earned credit from many more people than just her brother. It was her brave, matter-of-fact email to Deidre Saoirse Moen that exposed how power, codes of silence and community approval could foster the endemic problem of pedophilia within SF:

“The first time she molested me, I was three. The last time, I was twelve, and able to walk away.

I put Walter in jail for molesting one boy. I had tried to intervene when I was 13 by telling Mother and Lisa, and they just moved him into his own apartment.

None of this should be news. Walter was a serial rapist with many, many, many victims (I named 22 to the cops) but Marion was far, far worse. She was cruel and violent, as well as completely out of her mind sexually. I am not her only victim, nor were her only victims girls.” – Moira Greyland”

“None of this should be news.”

Being a victim doesn’t automatically make you right, but compare these reasonable, measured, deep and thoughtful responses of the victims to those of the pedophile-defenders.

A special mention should also be made of author Nancy A. Collins, whose work highlighting, denouncing and investigating Ed Kramer’s crimes met with intense professional and personal blowback from Kramer’s many defenders.

Compare the above responses to, say, this one at Will Shetterly’s excellent investigation into the problem: “At NAMBLA’s site, Linda Frankel’s Beyond Bounds: Intergenerational Relationships in Science Fiction and Fantasy begins by asking ‘Why read or write science fiction and fantasy?’ Her answer boils down to ‘Because that’s where the stories about adults having sex with children are.'”

By the time Heidi Saha was 14 years old, she was such a convention regular in the 1970s that Forry Ackerman (of Famous Monsters of Filmland) and publisher James Warren thought she was ripe for her own special magazine, featuring photos of the child cosplayer.

“An absolute delight! I love her!” – Isaac Asimov, promoting An Illustrated History of Heidi Saha, a fourteen-year old girl famous for portraying Vampirella at conventions. 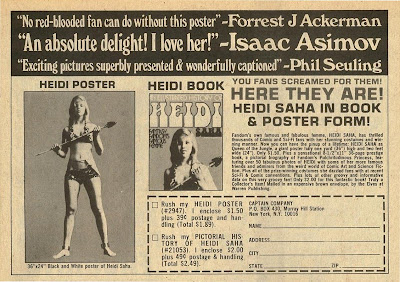 There is no middle ground here. This issue really is that divided: you are either for the victims, or against them.

A final word of thanks to all the survivors of this horrific crime who have -either privately or publicly in the comments provided their insights and thoughts on this matter. This unique knowledge that you never asked for and certainly never deserved has been very helpful in this modest attempt to shed further light on this number one problem in science fiction circles that has been allowed to feed on darkness for far, far too long.