Schuyler Hernstrom on Why Appendix N Started a Literary Movement 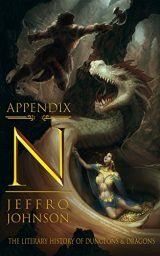 “A beginning is the time for taking the most delicate care that the balances are correct.” — Frank Herbert, Dune.

There are many ways to look at Jeffro’s Appendix N series. The quest to better understand the roots of D&D started off innocently enough. I was following along, curious to see how authors like Jack Vance may have shaped some actual game mechanics.

Somewhere along the line the project became much more than that. I can’t pinpoint where, but it happened. As a writer my first instinct is to imagine it as a fantastic story:

Professor Jeffro headed into the desert for a routine summer dig. His crew unearths an obelisk marked with strange sigils. Pictograms seem to depict a race of ancient titans bearing rafts full of papyri. As he sits making notes, an earthquake siphons away the shifting sands to reveal the obelisk is the prow of a long buried starship.

Jeffro has indeed unearthed something. It is the hidden heritage of our beloved genres. I feel a little embarrassed, frankly, that I was so wrong about the fiction that I love so much. What I thought I knew about the genre was a series of walls and fences, put into place to guide me toward opinions and attitudes that were presented as things inevitable. There were few signposts in this landscape. There was the Campbellian stuff. Then came the New Wave, the fathers of Now.  Before all that was the Dark Ages. The pulps. Only greats like Robert E. Howard and H. P. Lovecraft had the talent to last beyond that laughable and amateurish milieu. And though they remain, their work is forever tainted with the regressive ideas that lace their work. Hovering nearby, neither here nor there, was Tolkien. The source of all fantasy, so I was told. Beloved by millions, trashed by Moorcock and Brin and other forward thinkers, he sat always in the corner, a relic of the days of yore, reeking of pipe smoke and full of old fashioned ideas. Critics, editors, writers, and bloggers, all worked overtime to assure me that we were Almost There. The baggage of the past had given way to a new era where science fiction could finally be regarded as Important, as a force to fight for human progress, as a true literature worthy of critical acclaim in the loftiest towers of the sorcerers who produce taste and proper opinion.

That dragonfly frozen in amber, Appendix N, yielded a different story. My ideas and attitudes about the genre were changed irrevocably. For me as a writer, it could not have come at a better time. The variety and quality of Appendix N, the mashing of genres, the incredible breadth of works in the forgotten canon, it was all cool water to a man dying of thirst.

It’s not just me. Jeffro’s work has become a lodestone, pulling at a set of emerging and disparate writers. We are out there, creating what we want from influences as varied as Lord Dunsany and anime. From the maps he drew we are navigating rivers back to their sources. We are exploring myth and knocking the rust off old ideas like heroism and honor. Venues like Cirsova are embracing the pulp heritage with no caveats or apologies. We are creating our own markets and finding readers. The stones of shattered temples are repurposed, the building material for new cathedrals.

And all from curiosity about the origins of a game.