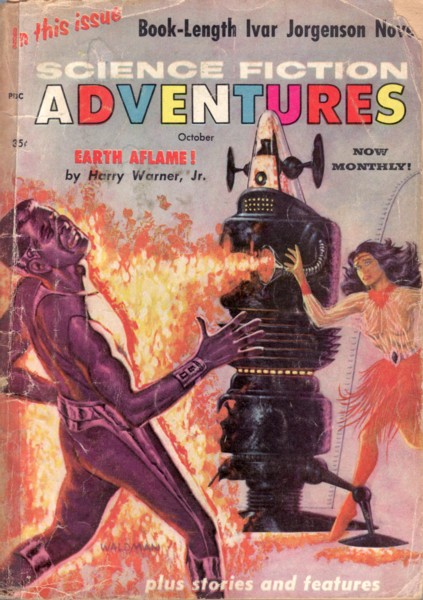 The October 1957 issue of Science Fiction Adventures had a new cover logo. Gone was title within a white rectangle. Barry Waldman was the cover artist for “Thunder Over Starhaven.”

Robert Silverberg was back as “Ivar Jorgenson” with “Thunder Over Starhaven.” Johnny Mantell has a stolen Space Patrol ship with the SP on his tail. He reaches the planet of Starhaven protected with a shield and a sanctuary for criminals. The defense system of Starhaven blasts the pursuing Space Patrol ships. Mantell is allowed sanctuary but undergoes a psychprobe which is a sifting of the brain to determine if someone is a bona fide criminal or a cop undercover.

Mantell was a weapons designer before a bout of alcoholism. Ben Thurdan, ruler of Starhaven, makes Mantell an offer to work for him. Before long, Mantell is drawn into a plot to kill Ben Thurdan. There is another wrinkle when revealed that Mantell is a Space Patrol man given a fake identity to infiltrate and overthrow Ben Thurdan. “Thunder Over Starhaven” is a hard-boiled story that just as easily could have been a crime novel set in a city with an undercover cop infiltrating a criminal organization. Silverberg was writing detective and crime stories for Sure Fire Detective, Murder, and Double-Action Detective at this time (also westerns and sports stories). The “Ivar Jorgenson” name appears to have been used for the more hard-boiled fare. Silverberg would expand and rewrite the novel from first to third person as Starhaven (Avalone Books, 1958; Ace Books, 1959).

Harry Warner was a fan with a handful of stories in science fiction digest magazines in the 1950s. “Earth Aflame!” has secret agent Ross stealing a starship built by the dictator of Transeuropa. He succeeds but has a stowaway, the daughter of the dictator of Transeuropa, Katherine. Stealing the starship set off a nuclear holocaust as Earth goes up in atomic fire. The rest of the story is a cat and mouse as Ross attempts to disarm Katherine and convince her to be his Eve as they find an inhabitable planet. The ship carries eggs and sperm for test tube kids but Katherine tells Ross they will do it the old fashioned way at the end of the story.

Joseph Farrell’s “We Learn Fast” is a short humorous story about Martians who pick up things fast. All told from the viewpoint of the Martian. Farrell had around fifteen stories in Startling, Planet, Astounding, Thrilling Wonder, If, and Galaxy from 1943 to 1959.

David Mason seemed to be a favorite of Larry T. Shaw as he turned up in Shaw’s magazine and later with Lancer Books. There are stories that Mason was a mercenary, had a pet wolf, lived on a houseboat that sank one night. He and the pet wolf had to swim to shore. A story told to me is Mason developed an allergy to himself and died a horrific death. Don’t know what the truth is but it makes for a great story. “The Gates of Pearl” has it personnel seeing ghosts. It is a short and inconsequential story.

The short novel format continued to pay dividends with another Silverberg novel getting reprinted. At least one story per issue reprinted so far. 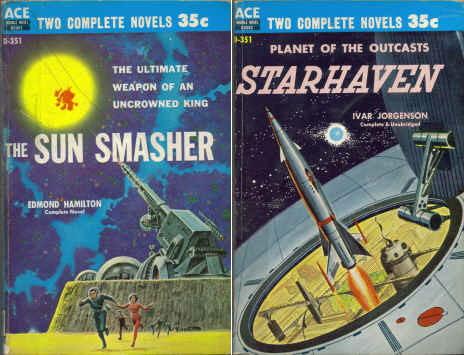