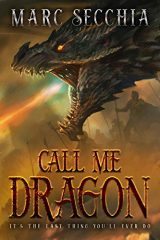 Call me Dragon. It’s the last thing you’ll ever do.

Blitz the Devastator has never done a decent day’s devastating in his life. Fireless, artistic and shunned by his Dragon Clan, he struggles to pillage even the meanest village. A future full of misery and failure beckons.

This much is true until the day the burly brown Dragon successfully – imagine that – kidnaps the Princess Azania. As a black Princess of T’nagru, this spirited beauty is by definition the most unforgettable woman in the seventeen realms. Knights errant, men-at-arms and sundry Princes expire at her feet in drivelling worship.

Unfortunately, they all want his scaly head on a platter shortly thereafter. Goes with the territory.

To Blitz’s consternation, the royal nuisance refuses to behave herself and be a typical pampered Princess. With humour, unconventional flair and the odd stomp of her diminutive slipper, she sets out to reform her Dragon.

One question remains. Who will save the Dragon from the Princess? 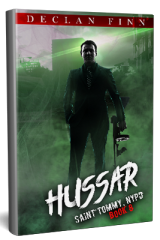 My name is Officer Thomas Nolan, and I am a saint.

Tommy Nolan lives a quiet life. He walks his beat – showing mercy to the desperate. Locking away the dangerous. Going to church, sharing dinner with his wife and son. Everyone likes Tommy, even the men he puts behind bars.

He lives a quiet life, until one day a demon shows up and he can smell it. Tommy can smell evil – real evil. Now he’s New York City’s only hope.

Lt. Tommy Nolan has enjoyed a relatively quiet life for the past three years. His promotion has taken him away from the streets and away from the line of fire.

But when a training camp for terrorists threatens his city, he’s dragged back into the sulfur. Creatures of the damned are rising, and he’s the only man who can stop them.

Because the heir of Tommy’s ultimate enemy has returned, and he’s bringing with him all the forces of Hell. 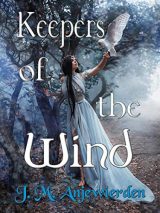 But the Alven dug too deep, releasing the demons of earth, terrible monsters they cannot hope to fight.

All that can stand against them is Fleur and the other priestesses.

Even as Fleur’s powers weaken, the Goddess sees fit to drop a mysterious Alven–half-dead and without his memories–into her life. Can she trust him, or is he a threat to her people? 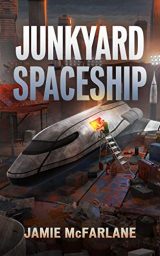 When aliens threaten his country, one grumpy old vet will take the fight to the stars.

Albert Jenkins would like nothing more than to putter around his junkyard, selling parts and working on old cars. When an alien spacecraft is shot down by US Air Defense and crash lands on his newly rebuilt home, he’s dragged back into the fight of his life. Lightyears away, a war for the control of Earth looms and humanity’s freedom hangs in the balance. Previously kicked off Earth, the Korgul are back and they are willing to destroy any who stand in their way.

To join the action, AJ lacks just one thing, a spaceship. With only a junkyard full of old parts, he’ll need help to get his plan off the ground. Fortunately, he’s got a plucky, pop culture loving, nano-sized symbiote who’s managed to roll back the damages of eighty years of hard living. With dogged determination he’ll repurpose an old, reclaimed shuttle and build a spaceship so he can join the fight one more time. 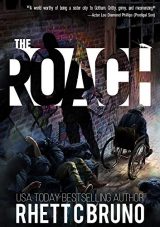 A string of killings. An identity stolen. Only he can find the truth.

Reese Roberts was the guardian of Iron City. It’s fearless protector. The only one willing to do whatever it takes… until he was shot on the streets and left paralyzed from the waist down.

Now, the vigilante known as the Roach has disappeared. Faded into legend.

It’s been years since Reese could take on crime and clean up the streets. He’s a shriveled old drunk, living like a hermit and waiting for his life to end. All that’s left to do is wallow in the mistakes that led him here. To wonder, if he went too far.

But when a copycat steals his suit and takes justice into his own hands, a new killer emerges, leaving brutal messages behind. He wants to eliminate the Roach for good this time.

It’s time for Reese to reemerge from his shell and fight back. Who else can stop the flurry of killings? Definitely not the corrupt police department. Iron City needs the Roach again. Only, this time, he’ll need to save it without his legs. 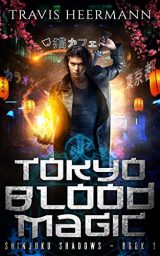 He’s never failed a witch hunt before. Until he must hunt the only woman he’s ever loved…

When Django Wong, a modern-day ninja turned sorcerer, takes a job to track down a newly Awakened witch, he discovers that his target is not only his lost love, but now she’s an enforcer for the Black Lotus Clan, a ruthless yakuza syndicate.

But time can change a person. Is she the girl who used to love him, a yakuza slave, or a deadly black witch?

With a smart-mouthed magical house cat as his ally, Django must protect her from other Hunter-Seekers sent to kill her until he can learn the truth of her allegiance. And not only that, if he can’t stop her from stealing a powerful magical relic, the Black Lotus Clan will launch a bloodbath in Shinjuku’s streets. 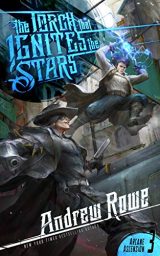 The Torch that Ignites the Stars (Arcane Ascension #3) – Andrew Rowe

After concluding their first year at Lorian Heights, Corin and his friends catch a train from their native Valia to the distant country of Caelford. For most, this would be a simple vacation. Corin has other plans.

Of course, Corin is Corin, and there’s absolutely no chance he’s going to be able to stick to a list.

…And even if Corin miraculously developed a sense of focus, he isn’t the only one with plans.

The mirror of a figure from Keras’ past.

When their plots intersect, Corin and his friends are, predictably, stuck at the center.

It’s going to be a long vacation. 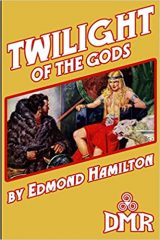 Twilight of the Gods – Edmond Hamilton

Edmond Hamilton was one of the most celebrated authors of adventure science fiction. Often he turned to various mythologies of the world for inspiration. In this collection you will find tales of heroes stumbling upon gates to other worlds, such as The Shining Land of the Tuatha De Danann and Valhalla, home of the Norse gods. On Earth, archaeologists discover forgotten temples of ancient deities such as Tiamat and Kukulcan. Hamilton expertly weaves the myths of the Greeks, Celts, Norse, and others into action-filled tales of wonder and horror. This collection contains some of his most exciting stories, including some which have not seen print in 75 years.

Stories included:
“Twilight of the Gods”
“Priestess of the Labyrinth” *
“The Shining Land” *
“Lost Elysium” *
“The Valley of the Gods”
“The King of Shadows”
“Serpent Princess”
“The Daughter of Thor”
* First time in print since original publication