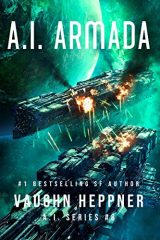 Years ago, Main 54’s brain-core had to flee his exploding planet-sized warship because of the treachery of Jon Hawkins. Later, Main 54 gained special processors, a new warship—something changed in him…greater clarity of purpose and superior combat skills.

He has been taking over the AI Dominion around here ever since. Now, his brilliant calculations reveal it is time to destroy the Confederation with a super fleet.

Jon is on a desperate mission in the void seeking clues for making the alien Subspace Teleport Device work. But even if he succeeds, the Confederation will need the courage of the Warrior Roke, the genius of the Sacerdotes, the cunning of the Sisters of Enoy and the power of the Kames to survive the approaching holocaust.

This will be the war to end all wars or final annihilation. 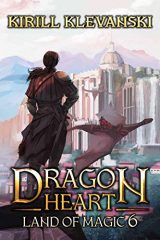 He left behind the Northern Kingdoms, tired of their wars and schemes. The golden waves of the Sea of Sand didn’t drown him in fire, but the Evening Stars ultimately didn’t bless him with their light. Despite his many adventures, despite the fact he’s already endured enough hardship to last him several lifetimes, his soul was restless. Finally, Hadjar Darkhan and his friend, Einen the Islander, reached the capital of the Darnassus Empire — Dahanatan.

They managed to do something most other outsiders would deem impossible — they became disciples of ‘The Holy Sky’ School of martial arts. What adventures await the former General and pirate? How will the very heart of the vast Empire treat them? What dangers lurk where the best of the Empire’s warriors are forged?

Hadjar had no idea. Still, he continued to follow the call of his dragon heart. Wherever it took him… 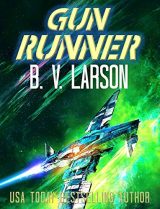 Captain Bill Gorman has mysteriously disappeared. His clone, set aside for a dark day like this, awakens and begins to put together the pieces. What’s gone wrong out on the frontier? Why are our colonies being attacked by aliens while the Conclave worlds dream of better days? And what happened to the original Captain Gorman?

Find out in GUN RUNNER, a thrilling all-new interstellar adventure by B. V. Larson, the King of Military Science Fiction. 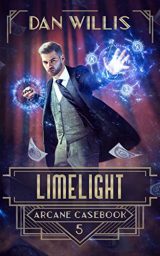 When a madman starts robbing banks the really old fashioned way, by blowing holes in them with magical explosives, the police want Alex to catch him before he kills and robs again.  There are two problems with that, however, first as far as Alex knows there’s no such thing as a blasting rune, and second his friend Danny Pak is up for a promotion and that’s not Danny’s case.

Alex splits his time between chasing the homicidal bomber and helping Danny figure out what happened to a dead writer who was basing her book on Broadway’s most famous murder.  While the bomber continues to elude Alex, he becomes convinced that the writer was killed by someone who wanted the old murder to remain unsolved.  Before he can pursue either case further, however, the feds show up, wanting Alex’s take on a series of bizarre magic related deaths.

Now Alex must solve the fifteen year old Broadway murder, catch a blast-happy bank robber, and figure out how average people are being killed by a mysterious, untraceable magic.  All the while he has scant leads, even fewer suspects, and the inescapable feeling that he’s being played. 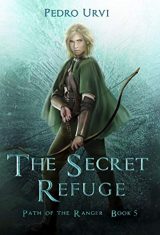 The Secret Refuge (Path of the Ranger #5) – Pedro Urvi

Only the best have access to the Elite Specializations of the Rangers. Will the Snow Panthers make it?

The war goes on in Norghana. The East supports the new King, while the West supports Arnold Olafstone, the legitimate heir to the crown. In the North the Wild of the Ice claim their lands. In the midst of the war, Lasgol and his teammates have graduated as Rangers.

They must decide whether to take the Specialization Test. If they do, and pass it, they will have access to training as Specialist Rangers and be able to opt for one of the elite specializations. For this they will need to go to a hidden, secret place: The Shelter. It is rumored to be somewhere special, secret and arcane.

Will Lasgol take the Specialization Test? Will he pass it? Will his friends? Who will make it and who will not? What new adventures are waiting for them at the Shelter? 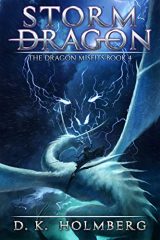 A new threat for the misfits emerges, only this time it might be another dragon.

Jason spends his time trying to protect Dragon Haven and understand the dragon misfits now that he has prevented Lorach from using them. He searches for more misfits, but quickly learns he won’t be able to save them all.

When word of an attack on the Dragon Guard suggests Lorach is renewing their attempt to destroy the rebellion, Jason leaves to investigate. What he finds changes everything he knows about the misfits.

Saving the dragons means risking everything he’s gained. If he fails, the rebellion will fail and Dragon Haven will fall. Even worse—the dragon misfits he’s fought to find will be destroyed.