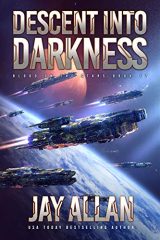 Descent into Darkness (Blood on the Stars #17) – Jay Allan

Tyler Barron and his associates are divided, split between two courses of action. Barron doesn’t believe in the desperate plan to eradicate the Highborn, the strange virus that has been created for that purpose, but may or may not be the exact formula used by the empire three hundred years ago. There are too many possible problems…a small difference in the virus, a cure created by the enemy…for him to accept the plan. Barron commits instead to a traditional defense, even though he knows the chances of ultimate success are almost zero.

Many of Barron’s cohorts are on his side, but not all. The leader of the other party is none other than Andi Lafarge, Barron’s wife. If the odds were any less gruesome, either one would have given in to the other. But Andi wants nothing less than the extinction of the Highborn, and she believes the virus will work. She will do anything to see it used. Anything.

The two work together, somewhat at least, and apart as well, striving to end the conflict in any way possible, with millions of spacers fighting…and facing probable doom either way. It is the last stand of free humans on the Rim, the final chance to evade slavery…or worse. 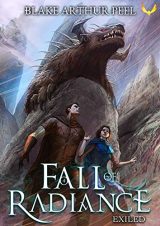 War has torn Tarsynium asunder. However, the true war lies just ahead…

After the defeat of the king’s army at Dunmar City, a letter arrives from the Conclave’s High Magus seeking a truce. The Nightingales, in desperate need of friends, leave their mountain stronghold to forge a new alliance with rangers and mages, to unite themselves against the king. But when political intrigues lead our young heroes into a trap, they face a punishment reserved for only the vilest of criminals: exile.

In order to survive the wastes beyond the Arc of Radiance, Owyn and Zara must rely on each other’s strengths. Together, they must somehow return to their homeland, to unite its warring factions and help change its uncertain fate.

They soon learn that the gravest threat lies not in the elements, but in the encroaching demon armies that are drawing ever closer to the kingdom… 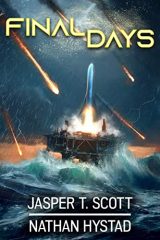 The countdown to the end of the world has begun.

A mysterious convergence of natural disasters threatens to destroy life as we know it, and people across the United States are going missing. With no one left to investigate, Special Agent Kendra Baker takes the case, trying to solve the disappearances before she’s out of time.

Among those abducted is Valeria Miller, the daughter of ex-Marine Corporal Andrew Miller, and he’ll stop at nothing to find her.

With the help of an unstable conspiracy theorist, they find themselves on the trail of a reclusive billionaire who just might have all the answers.

As the natural catastrophes escalate and the evacuations commence, it becomes a race against the clock to find the abductees before it’s too late. 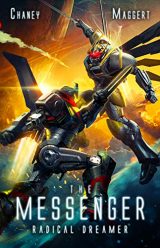 The galaxy itself is under siege, and only the Messenger can save it.

The Verity are in collapse. Clan Shirna is gone. And all along, the ships of the Cygnus Realm have been pushing back until only the Golden are left.

Or so Dash thought.

With the discovery of two new races and a sphere of stars embroiled in war, Dash hurls the Forge ever deeper into territory where no human can live free. The Golden are no longer merely advisors—now, they are present in the fights themselves, their silver ships gleaming with menace in a war that threatens to incinerate an entire arm of the galaxy.

With mechs, and carriers, and a tough survivor named Jexin, Dash will strike at the first defensive line of an empire older than human history, and with it, set events in motion that can only end in victory for one side and the total destruction of the other.

For Dash, the choice is clear. Only absolute victory will do, and he will spill his own blood to achieve it.

One battle at a time. 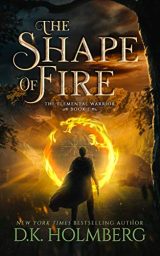 The Shape of Fire (The Elemental Warrior #1) – D. K. Holmberg

A return of a long defeated threat changes everything for a master of the elements.

The power of the elements can be complicated to master. Most reach it through the element bonds, ways of connecting to and shaping power that allowed the nation of Terndahl to thrive for centuries. Few can reach power of their own, an ancient way of holding magic the elemental warriors of old possessed.

As spirit master, Tolan teaches how to use the power of the element bonds, but he knows a greater truth. Connected to power of his own, Tolan can use that, along with his bond to the elementals, in ways others cannot.

When a threat all thought long ago defeated returns, Tolan finds his service to the Academy will require more than a master of spirit. Stopping this threat requires an ancient elemental warrior, but what if even that magic is not enough? 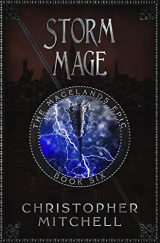 The War of Vengeance has begun; the Rahain have invaded the Empire, and the fate of the world hangs in the balance.

Keir Holdfast, elder son of Daphne and Killop, is always in trouble. Already an accomplished vision mage at 16, his life is turned upside down with the news that he also shares the same powers as his aunt, the infamous fire mage who brought down the old empire.

Can he learn how to harness his powers in service of the new empire, or will his arrogance lead to his downfall?

Hundreds of miles from the fighting, within the depths of the Sanang forest, a visitor arrives with a message for a family of hedgewitches; a message that will transform their lives, and change the destiny of the Magelands forever. 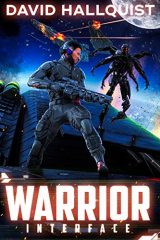 Falling Back to Earth…

Brandt Wills tried to prevent a final cataclysmic war between Terra and Luna. He failed. Now he’s falling back to the totalitarian world of his birth, but he’s not alone. With advanced cybernetics, the AI computer ghost of Sharron, and a partly-tamed alien symbiont, he might even have a chance. All he has to do is land behind enemy lines, fight his way into the fortress-towers of the State of Terra, and find the location of the hidden laboratories of Singularity before the final war wipes all life from two worlds.

Oh, yeah, then he has to break into one of the hidden laboratories to find out what’s inside of him and how to get it out. If that’s even possible. Not only are the laboratories hidden, though, they are also well defended by troops armed with railguns, plasma weapons, and self-propelled grenades. And those are just the weapons Brandt knows about.

And, if all of that weren’t difficult enough, he’s now on the radar for the other players in the system. Venus would love to control him, and Saturn and Jupiter are moving forces into place to capture him. Will Brandt be able to unlock the mysteries of the alien symbiont in time, or will he become just another science experiment for Singularity or one of the planets? 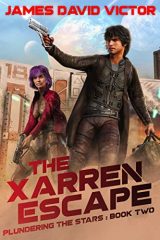 The plan had been good, but things went so wrong. So very wrong.

Yan and his band of rogues are intent on plundering their way across the galaxy. When they stumble across the score of a lifetime, they quickly go all in for one last job. Enough so that his crew—his family—could live a life of luxury. With everything on the line, there’s no way they can fail. At least that’s what they hoped.

Now they were all gone, and he was in a prison he would never escape. Can he find new allies and escape certain doom, or is Yan destined to live out the rest of his days—however few those may be—fighting just to survive?