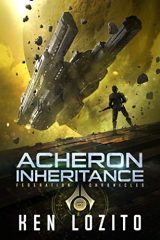 On a dying world along the galactic fringe, Quinton Aldren awakens in the body of an archaic android that’s barely operational. He has only vague memories of who he was and no idea what has happened. Everyone is gone and autonomous mechs are hunting for him.

As remnants of the old federations struggle to survive after a devastating war, old alliances are eradicated, leaving warlords and mercenaries to fill the void. When a powerful mercenary discovers Quinton’s origin, he’ll stop at nothing to capture and enslave him.

The galaxy has changed, forcing people to adapt, while the dangerous machines of the Federation Wars hunt for people like Quinton, and they don’t care who gets in the way. Quinton might have missed the war, but his link to the past could be the key to save humanity’s future. Will he survive long enough to discover it in time? 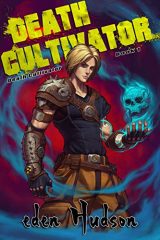 Fight for your Death.

When regular high schooler Grady Hake is mistakenly taken by the Angel of Death, he thinks his life is over. Then he wakes up on a prison shuttle bound for Van Diemann’s Planet, a penal colony run by brutal gangs of criminal cultivators. This is his life now, and if he wants to survive it, he’ll have to learn to harness his unique Death Spirit, make friends with alien outcasts, appease a band of hungry ghosts, and fight his way into one of the strongest gangs on the planet.

From eden Hudson, bestselling author of Rogue Dungeon and Path of the Thunderbird comes a brand new series you won’t want to put down. Death Cultivator is a sci-fi wuxia for fans of shonen manga and anime such as Hunter x Hunter, One Piece, and Deadman Wonderland. 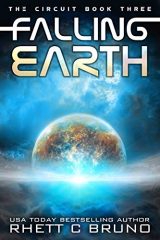 The time to return to Earth has come…

Cassius builds an android army under the control of ADIM in order to attack Tribune Benjar Vakari. While ADIM loves his creator unconditionally, he grows more independent by the day in his methods. Soon, he may be too powerful for anyone to stop.

Talon Rayne teams up with Sage Volus once more when Talon discovers that his daughter has been captured by the very Tribune Cassius Vale is after. Together, they have no choice but to ask for his help in saving her.

Are they just another cog in his scheme for bringing down the Tribune, or is there a part of him left that cares about anything other than vengeance? 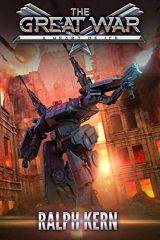 The largest invasion in the history of the galaxy begins.

The People’s territory is a prize ripe for the Hegemony’s taking. Their worlds myriad. Their resources immense. From the highest echelons of government to the citizen toiling, it is a beacon of equality and a worker’s paradise.

Except some are more equal than others. To disobey, even to question, means death. Or worse.

Private Iriana Sharov is just one soldier in the People’s army of millions. When Hegemony assault ships darken the skies and disgorge legions of merciless troopers and mechs, she learns they are all merely pawns for their masters to sacrifice on an uncaring whim.

The two brutal empires collide. For Sharov and her comrades, hope is measured in surviving each day, even each hour, as it comes. But when she discovers her skill with a sniper rifle, Sharov soon finds herself a hero of the People.

Her odyssey will take her from the battlefields of an agricultural world, through the vicious street fighting of a labyrinthian factory moon, and into the very corridors of power in the People’s capital city.

But the greatest danger isn’t the Hegemony and its vast armies of ever-advancing troops and war machines. It is telling the truth to those who don’t want to hear it. 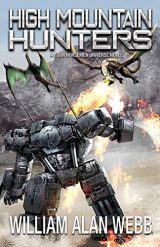 Until the coming of the Galactic Union put them out of business, the Gurkhas were among Earth’s fiercest and most successful mercenaries. Now one man—Ganju Limbu—wants to use their heritage of courage and loyalty to bring prosperity to Nepal, and he is one of two men selected to head Mercenary Guild-sanctioned Ghurka mercenary companies.

Nothing is ever easy, though, and there are forces—both Human and alien—who don’t want to see the Ghurkas succeed, and they will go to great lengths to stop the Ghurka Rifles from ever getting off planet. Other forces hope they do get off planet…so they can take advantage of them.

When Limbu and the Rifles take their first contract, everything seems easy—too easy for what they’re being paid to do—leaving Limbu to wonder what he isn’t being told. Treachery abounds, and the Rifles are on a collision force with an alien army that outnumbers them ten to one, leaving them with only their courage and guile to stave off defeat.

For the Ghurkas, though, it’s better to die than be defeated, so they will have to come up with a strategy that turns the tables on the enemy, or the Gurkha Rifles’ first contract will also be their last! 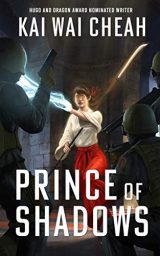 The Old Gods are Coming Back!

When a black op goes awry, the Nemesis Project pulls deniable operator Luke Landon off the line. But while mortal authorities want him to stand down, the gods aren’t done with him yet.

Pressed into a secret war between infernal and divine powers, Landon is thrust into a new campaign. The elder gods are returning to do battle with the Unmaker—and they are choosing agents to carry out their will.

In Japan, a goddess has chosen a shrine maiden as her soldier. The shadowy Organization, the secret rulers of the world, have her in their sights. Without official sanction or backup, Landon and his allies must go rogue to save her.

Landon has always been prepared to lay down his life. But this time, he may just have to give up his immortal soul. 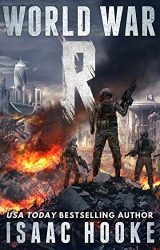 They are everywhere. Your workplace, your house, your street. And now they are coming for you…

Logan Asher and his elite squad are sent to the Red Sea to put an end to a terrorist cell.

It’s meant to be a simple in and out mission. His rangers have the edge. Better training. Better firepower. Better gear. Plus a slew of support bots.

But then all of their tech turns on them. Their smart goggles go dark. Their weapons jam. The machines that once fought at their sides now shoot at them.

Cut off from HQ, Logan and his men fight for their lives to get home. No matter where they turn, the machines hunt them. On land, sea, and air.

They must rely upon their wits, their training, and their very humanity to survive, knowing that even if they make it back, the Land of the Free might not be so free anymore…