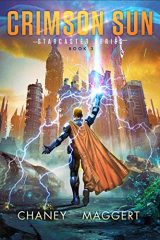 The Nyctus don’t like losing, and they’ll go to any lengths to turn the tides of war.

When the idyllic planet Nebo is scorched into oblivion, it’s obvious that the Nyctus are moving massive fleets into human space again, and their intention is clear: even if they lose their ships, they will render planets into ash.

To add to the damage, they seem to have key intelligence that could only have been obtained by a human crew.

Only one ship has ever gone missing, it’s disappearance unexplained and its crew never to be found: The Pool of Stars, one of the first starships.

And she’s been missing for centuries.

Now, after all these years, it’s up to Thorn to find it, for her disappearance might hold the key to victory. 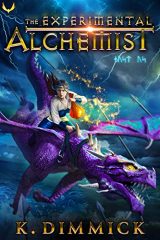 Born to die in the game. One chance to solve the riddle that’ll save her life…

Orianna, born a slave who could be sacrificed into a deadly virtual world at any moment, still dares to dream of a better life. But when she’s finally uploaded into a land of magic and monsters, she has six days to solve an impossible riddle before nanotech destroys her body from within.

Lagging far behind her fellow adventurers, Orianna joins the domineering Dragon Hunter’s Guild in an effort to survive. But when she realizes the guild leader will do anything in his bid for power, she’s faced with sacrificing an innocent to save herself. Her risky plan to use magic and pass through the Dragon Gate will either save her or wipe her from existence.

Will Orianna solve the riddle in time to prevent her from dying for good? 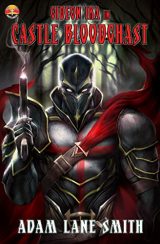 You can feel Castle Bloodghast seething around you.

This ancient castle is the grave of many a hero. When a fearful angel appears to him in a vision, Gideon is charged to enter the cursed fortress in search of his childhood friend. But demons are the least of the denizens lurking in the heart of the castle. Gideon must battle the fruits of the most depraved genius as he struggles to reach his old comrade.

Abominations lurk in every shadow, and the worst atrocities are those committed by bloody human hands. Will Gideon put the corrupted experiments to the torch as they rampage out of control? Will he find a way to escape the curse and free his friend? Or will he break under the unrelenting horror at the heart of the fortress?

Enter Castle Bloodghast, where even angels fear to tread. 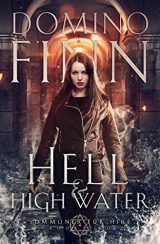 You think your boss is a hard-ass… Mine’s from the pits of Hell.

My name’s Shyla Crowe and I’m a procurement specialist. That’s a fancy way of saying I steal things. I’m also a demon summoner, and… well… there’s nothing fancy about that.

You need to watch yourself around hellions. Case in point: I’m currently paying for my father’s sins. The Angel of the Abyss has me firmly under his thumb, profiting from my dishonest work. Millions of dollars and score after score aren’t enough to sate his ambition.

Now his eyes are on a new prize, and pulling off the heist will take the combined efforts of my team and then some… In from the cold walks Cisco Suarez, a necromancer with an ax to grind. As if my troubles aren’t bad enough, he thinks I owe him.

I’m a practical gal so the plan’s simple. Keep the boys from butting heads and hope neither of them gets me killed… or worse. Hell is, after all, notorious for inspired punishment. 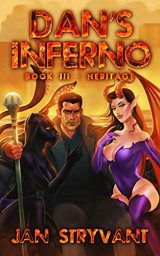 Dan’s freed the remaining three girls from their prisons, but there is still the little matter or the curse binding them to him, and of course binding him to an early grave. But if nothing else, he’s kept his word, and thankfully they really do want to keep him because they only place they’ve been abusing him is in bed. However nothing is ever simple in Dan’s world anymore, because even after the curse gets conquered, there’s the little problem of the demonic blood that the curse introduced to his body.

The only thing keeping him alive at this point is his newly discovered mixed heritage. But even that won’t keep him alive for long if they don’t find help soon. Magical help. Powerful help. Perhaps even the kind of help that requires a visit to Wrath’s father, a truly last ditch resort as he’s not only the last person you meet to meet in a dark alley, meeting him on the street in broad daylight isn’t exactly safe either. However all those many years of being mean, evil, and an all around terror have left him with a knowledge of curses and their effects that few can rival – few still left alive.

This of course doesn’t mean that the wizard who cursed him isn’t trying to kill him, he’s actually looking to be much more proactive in that venture. Assuming however that Dan and the Girls don’t kill him first. 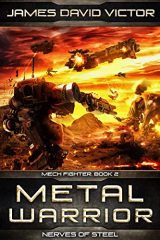 Even with humanity facing a deadly enemy intent on wiping them from the face of the Earth, there are always those willing to sell out for personal gain.

Dane and the Mechanized Infantry Division have faced off against the Exin and come to a terrifying conclusion. The aliens are not working alone. As Dane’s own body fails because of the virus, he must lead a mission to prevent the Exin and their sympathizers from taking out key military figures. If they fail, the cost to Dane, himself, and humanity, as a whole, could be catastrophic.

Metal Warrior: Nerves of Steel is the second book in the Mech Fighter series. If you like fast-paced space adventures with engaging characters and exciting battles, you will definitely want to see how the Metal Warriors save mankind, or if they can. 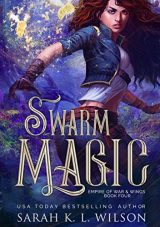 Can anything save her closest ally?

Aella has gathered the resources the revolution needs and performed miracles with her bee magic that no one ever expected were possible. But now her closest ally’s future hangs in the balance and only her bees can save him.

With the entire army of the Empire hunting her down determined to drag her back to the crown prince, time is running out. If she doesn’t find a way to quickly free her ally – and herself – from the crown prince and the magic bonds he’s put on them, they may never get free at all.

Once again, Aella must choose – sacrifice herself for the sake of her family and friends or watch everything she’s fought for fall apart. 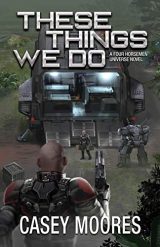 These Things We Do: The Story of Bull (Four Horsemen: Rise of the Peacemakers #4) – Casey Moores

In the Galactic Union, few Human corporations are as storied or as well-known as the Intergalactic Haulers. Yet, they’re only one piece of a larger story.

During the Alpha Contracts, one hundred of Earth’s finest mercenary organizations went to the far reaches of the Galaxy to fight for credits. Only four returned. The rest, tens of thousands of humanity’s best warriors, were gone. Unbeknownst to most, a small, unconventional group chose a different path. Their foresight and unique talents set the stage not only for the long-haul shipping company of the present day, but of something else.

Years later, a promising young mercenary receives an invitation to a strange, secretive shipping company. There, he discovers a shadowy organization dating back to the Alpha Contracts. An organization dedicated to rescuing Human mercenaries and returning them with honor. An organization, which—despite its many faults—restores his faith in humanity. It gives him purpose and earns him his nickname: Bull.

Unfortunately, this clandestine company, and their heroic efforts, have not gone unnoticed. When a high profile hostage rescue goes bad, Bull and Jimmy Francis—the young pilot known as Snowman—find themselves searching for a way to create a better, more capable company so that others may live—all while hiding in plain sight. 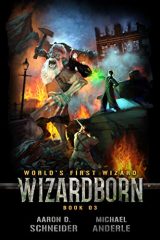 The War to End All Wars just got personal.

The World’s First Wizard was dragged into this fight kicking and screaming, but now that the dark conspiracies have dredged up specters of his past, Milo is determined to put them down once and for all.

His power growing with the stakes, Milo faces foes, human and otherwise, with aims that threaten to reshape the world, and they’re willing to do it at the cost of millions of souls. Milo, hero or not, can’t stand by, and so with his deathless bodyguard and fey girlfriend, he plunges into the dark, swimming upstream all the way.

But these waters are filled with hungry things, lurking just beneath the surface, things with long teeth and no fear of some paltry human sorcerer.

Milo’s going to have his work cut out showing them why humanity is officially off the menu.