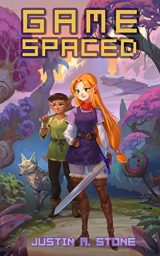 Pirates on a treasure hunt. An ancient weapon lost long ago. Two kids determined to save us all. Oh yeah, and space travel.

Trish and Patrick never saw themselves as heroes. But when they go into a Cryo-Sim world on their space flight to train for their new lives on a colony far away, everything changes.

A gang of pirates searches for a legendary weapon called the Blade of the Sea. Their quest drags our kids into crazy adventures that includes an underwater fortress and secret temples.

Trish and Patrick fight zombies, TNT-loving goblins, and even befriend a robot wolf as they solve mind-boggling puzzles and overcome over-the-top obstacles.

It’s great fun, but they have no doubt that they’re in way over their heads. Even more so when they learn that the Blade of the Sea is the key to an ancient treasure with the power to bring the world to its knees. 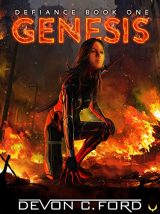 Power corrupts. Freedom is dead in the wasteland.

Generations after the world was reduced to ruins by war, the remaining pockets of humanity are ruled over with an iron fist. The streets are patrolled around the clock, curfews are enforced and executions occur for minor offences.

Born, raised, and trained in secret, Eve is forged into the perfect soldier. The time comes for her, and the others like her—the members of Project Genesis—to take the fight to their oppressors.

But the Party have their own clandestine projects lying in wait. 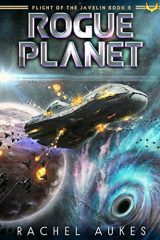 Space isn’t so big after all.

The Black Sheep are ready for a vacation. Instead, they get sucked into a black hole that spits them out into an uncharted system with a single rogue planet that’s inhabited by an AI force that’s none too fond of humanity.

From there, they find themselves at the front of a deadly military operation to stop the alien threat before it’s too late.

The battle against planet rogue has arrived. 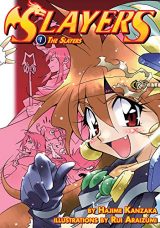 All I wanted to do was swipe a little bit of bandit treasure.

And for what? A tiny little artifact that can bring about the end of the world? 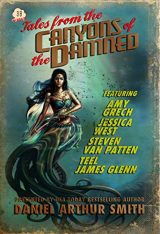 This thirty-eighth issue of Tales from the Canyons of the Damned consists of five sharp, suspenseful, thought provoking short stories—each from a different featured master of speculative fiction.

“The Patron Saint” by Steven Van Patten
“EV 2000” by Amy Grech
“The Fear of a Z’n” – A story of Altiva by Teel James Glenn
‘Boys in the Basement” by Jessica West
“The Invader” by Daniel Arthur Smith.

Tales from the Canyons of the Damned is a dark science fiction, horror, & slipstream magazine we’ve been working on since 2015.

What is Dark Science Fiction and Horror? Think of it as a literary Twilight Zone, Night Gallery, or Outer Limits, it’s Netflix’s Black Mirror and Amazon’s Electric Dreams in the short story format. And it’s a bargain. Each monthly issue has three-to-five sharp, suspenseful, satirical tales from today’s top speculative fiction writers.

These are Dark Sci Fi Slipstream Tales like you’ve never read before. 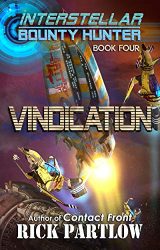 From the hunter…to the hunted.

Grant Masterson has spent his whole life putting criminals behind bars, but after shattering every law to save the life of the woman he loves, he finds himself in the harshest prison in the galaxy, surrounded by hardened killers.

He needs all his wits and skills just to survive…and when the sentient AI known as The Oracle, the head of the criminal network called Nautilus, infiltrates the prison and puts a price on his head, even the best bounty hunter in the galaxy may not be tough enough to live through it.

Will Grant’s long trail end in the nightmare known as Tuol Sleng…or will his friends manage to rescue him and hunt down the Oracle? And will Grant Masterson finally find…Vindication? 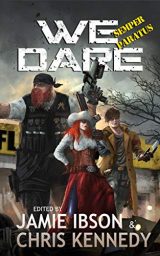 We Dare: Semper Paratus: An Anthology of the Apocalypse  – edited by Jamie Ibson and Chris Kennedy

Fifteen outstanding authors. Fifteen stories of rising from the ashes!

The apocalypse is coming! Scientists and science fiction novelists have long predicted various forms of the apocalypse, from plagues to wars to aliens. If there’s a way to end civilization, someone has probably prophesized it. Civilizations rise and civilizations fall…but are you ready for it to happen to you? How will you survive and thrive in the event of an apocalypse?

Edited by Jamie Ibson and Chris Kennedy, “We Dare: Semper Paratus” is a collection of 15 all-new stories that explore the apocalypse and what happens next—from surviving the fall to getting through those first perilous days, to learning how to adapt and survive in the new world survivors find themselves in.

What happens when the nations of Earth fall to a nuclear war, and you’re trapped between the combatants on Mars? What if you need to cross a continent to get to the only safe place? How do you survive living in a Fallen World?

One thing is certain—like every civilization before ours, at some point, ours will fall. Will you be ready when that happens? Our authors have dared to look at every type of apocalypse from nuclear war to shadow monsters to darkness falling, and they are ready for the end of the world…are you prepared as well? 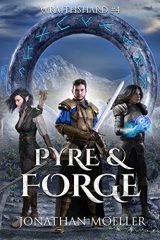 To save his lands from the armies of Lord Razalis, Mazael Cravenlock must destroy the Wraithaldr, the ancient artifact of necromantic evil.

But to unmake the Wraithaldr, he needs a sword of the legendary Knight Armigers.

And the only place to find such a mighty blade is in the dungeons below the ruins of Castle Valdrake.

Ruins from which few have ever escaped…