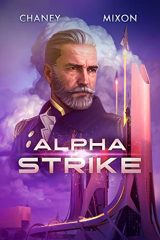 Be where your enemy is not. – Sun Tzu

The time has come for Commodore Jack Romanoff and the crew of the battleship Delta Orionis to strike back at the robotic Locusts. He’s outgunned, outnumbered, and commands a battleship flown by battered and bloodied reenactors and trainees.

Yet they must win.

The Locusts control New Copenhagen, but that’s the only place they can get nuclear warheads for their missiles. They must launch an alpha strike to take the system and hold it against all comers. If they fail, they lose their most potent offensive weapons and leave billions trapped under the invaders’ robotic heels.

They must not fail. 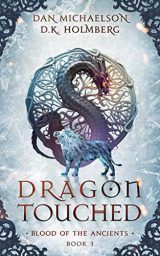 Fire essence flows through the kingdom. But it isn’t the only kind of essence.

Desire to understand his strange essence pushes Rob. He’s left his village, but now he’ll need to leave the kingdom and all that is familiar for him to get the answers he craves.

What he finds leads him to question if his essence is corrupted. With an essence like his, how will he ever master it enough to evolve?

As the icy Spread pushes toward the Borderlands, the only way for Rob to find his answers is out in the Spread—but doing so may cost him everything. 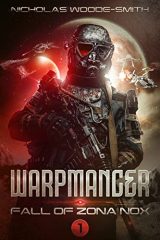 James Terrin thought he’d lost everything. But he hadn’t lost his planet. Not yet…

Zona Nox, a skiting cesspool at the edge of the galaxy, is under attack. James’ family, gang and very home are threatened as brutal aliens shred the flesh of humanity.

James may be a master thief, but he’s not a soldier. But things will have to change.

He never thought he’d find himself fighting side by side with the desperate forces of the Trooper Order. But if it means defending his home – James will become one of the tinmen he used to ridicule.

Enemies will become friends. Rivals will become brothers. And James will learn the meaning of duty, as the fall of Zona Nox approaches. 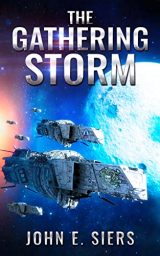 A Storm is Coming…

Relations between the Lunar Free State and the nations of Earth continue to deteriorate, with Earth’s power brokers seeking ways to test the readiness of Luna’s fleet, bringing the nations to the brink of open war.

When the Akara reveal the location of a planet with a primitive human population, the Lunar Free State rushes to check it out, but thanks to a security leak, the Confederation of Nations also learns of the discovery, setting up a military confrontation.

Meanwhile, another Confederation of Nations operation threatens the Lunar Free State’s relationship with the ruling monarch on planet Tatanna. Luna’s Marines respond to that threat, but what will happen when the Confeds launch an attack on LFS naval forces in the system as well?

Lunar warships are forced to engage the enemy in two distant star systems, but the biggest test will come at home, as divisive elements in the nation’s own Lunar Directorate question Luna’s leadership, while its enemies plan for an attack that will cripple the Lunar fleet… without firing a single shot.

Will the Lunar Free State be able to weather the gathering storm? 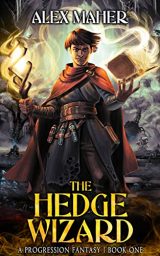 Legends speak of wizards with the power to rival Gods…

To Hump, it’s just a story. Apprenticed to a wandering wizard, he grew up following the coin from one quest to the next. He always believed his master was just an ordinary hedge wizard, until the old man suddenly died, and his book of spells bound to Hump’s soul.

Knowing no other life, Hump takes up his master’s staff and heads out alone into a world of dungeons and monsters. Scorned by the gods, wizards can trust only their own wit and skill to survive.

Lacking the godly gifts and grand ideals of the Chosen few, Hump fights for something else. If he wants to eat, he needs to work. And with a new Dungeon opening in Bledsbury, where better for a young hedge wizard to earn some coin?

So begins the path of The Wanderer. The White Flame. The Hedge Wizard. 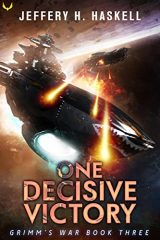 The Alliance needs to strike back, but the politicians are cowards. Admiral Wit DeBeck has a simple three step plan to punch the Caliphate right in the nose and send a clear message.

Step 1: Kick Lieutenant Jacob T. Grimm out of the navy and have him steal his own ship.

The only ship that can do it, has the only captain with nothing to lose. The Caliphate struck first, but Jacob is going to strike hardest.

Between stealing his own ship, Zuckabar separatists, and rogue pirates, the Interceptor has a gravcoil full of trouble before they even enter hostile space.

However, there’s a problem in orbit that Jacob doesn’t know about. Even if they can rescue the slaves, they may never leave the system.

If Jacob can’t find a way to succeed, then the Alliance is headed for a war they can’t win, and all of humanity will pay the price. 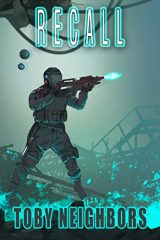 He didn’t ask for a fight…

But he never walked away from one either…

And this time, his enemies have gone too far!

Staff Sergeant Eli Vanhorn, hero of Leonis B, has been called back to active duty.  With advanced tech from the Alethian race, Humanity’s Galactic Fleet is planning a strike on the newly discovered Orrkasi home world.  A platoon of experienced Terrestrial Advance Combat Marines is put together, and Vanhorn is called out of retirement to join them.

But like any mission, much of the intel is compartmentalized, with superiors slow to share what might be vital details on a dangerous operation deep behind enemy lines.  Van must navigate the world of military politics, find his place in a new platoon, and survive a grueling mission on a world he knows nothing about. 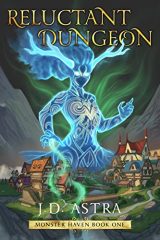 Transforming into a monstrous dungeon couldn’t be all that bad, right?

Dolli had a very hands-off approach to ruling her once booming village. She preferred to use her alchemical skills to brew a nice cup of tea and keep whiny petitioners off her lawn with Wendigo repellant. But she pays the price for her apathy when her neglected village transforms into a Dungeon, making it fair game for any Hero with a lust for loot.

It doesn’t take long for one such Hero from Dolli’s dark past, Keegan Plague Ender, to arrive with his sword ready to be bloodied. The villagers are evolving into powerful Dungeon denizens who can respawn if they’re killed—or they could if a mated pair of wyverns hadn’t turned the seat of the dungeon core into a brood nest. Now, with one swipe of the Hero’s blade, the former townsfolk could be lost to the Lifestream forever.

Despite her curmudgeonly nature, Dolli can’t let that happen. Can she rebuild the confidence of her people to roust the wyverns and reinstate respawns? Even if she can, will the young Dungeon hold out against the storm of raiding Heroes?