Discover galactic secrets, modern-day paladins, and the Mongoose and the Meerkat in this week’s new releases. 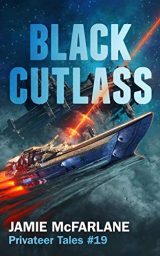 He thought the bloodshed was over. The true terror is just beginning…

Captain Liam Hoffen has no time to relax after defeating the Mendari. Hastily organizing an expedition to their home world, he brings his beleaguered crew across the stars to install the new leadership. But as soon as he arrives, a massive prototype warship slices into their path and threatens the entire mission.

After a daring confrontation, Hoffen pushes through to the planet. But once there, he discovers a terrifying weapon of mass destruction was launched at the end of the war. And the Mendari people are mind-controlled from revealing any secrets… including its deadly course.

Can Hoffen break through the horrific mental manipulation and stop an apocalyptic attack? 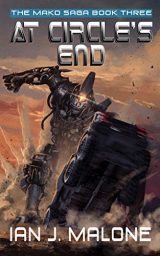 In the months since his disappearance, Danny Tucker has retreated to the darkest corners of Alystierian space, seeking intelligence on the Empire’s new chancellor, Alec Masterson. Backed by a crew of outcasts and fighting from the shadows as the enigmatic Rogue centurion, Danny will stop at nothing to achieve his mission—vengeance for the brutal murder of Madisyn Reynolds.

Still, try as he might, Danny can’t remain underground forever, and with sightings of the Rogue growing more frequent, Lee Summerston won’t rest until the lost Renegade is found. Meanwhile in the core, Aura stands on the brink of annihilation as Imperial forces draw ever closer to her shores.

In the end, scores will be settled and brothers will rise united…or they’ll all burn together. 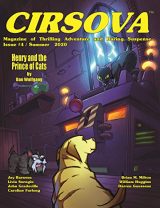 This issue of thrilling adventure and daring suspense features the following stories and more:

“Battle Beyond the Continuum”, by DARREN GOOSSENS
Rex Funnel and Paul Aglet have travelled across time and space, testing their new continuon flux drive—and found themselves in the midst of a planetary conflict!

“The Meeting”, by LIVIU SURUGIU [translation by RALUCA BALASA]
Two star-crossed lovers, doomed by their strange malady to never meet, must share their thoughts and feelings by the letters they hide within their asylum chambers!

“Henry and the Prince of Cats”, by DAN WOLFGANG
A strange incident has left his master dead! With his newfound intelligence, Henry, a Scottish Terrier, sets out to solve the mystery of what happened to all the humans!

“Death’s Shadow”, By CAROLINE FURLONG
Iraq War vet Matt Barnaby has been blessed—and cursed—by the ability to see the shadow of death, hanging about the auras of those around him! 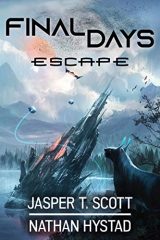 The secret of their new home has been revealed. Now there’s only one thing left to do…

Andrew and Kendra have learned what’s on the other side of the ridge, but it leaves them with more questions than answers. Their colony has turned into a dictatorship under the thumb of its delusional self-appointed leader, the Reverend, making their lives a living nightmare.

With a plan in place, and help from their new allies, the group plans to sneak out of the colony and make contact with their new neighbors.

But nothing in Eden is ever as simple as it seems.

Join Earth’s remaining survivors as they struggle for freedom and learn the truth of why they were really saved. 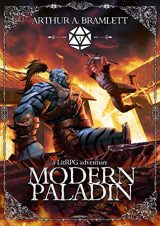 William Shawcro is an ordinary young man, living an ordinary life, when out of nowhere he finds himself in the body of his long-time character, Archaeus, in this isekai-style fantasy story.

Forced to play the role of Archaeus and act within a strict Paladin code, he must navigate this shocking new world of magic all the while questioning whether it’s just a dream.

William quickly realizes the life may not be all it’s cracked up to be after facing frightening conflicts and becoming entangled in this new world’s politics. While he is quite overpowered having made it to level 20, brute force can’t resolve some situations.

All he can do is keep pushing forward and discover the truth of why he is here, and if he can ever return home. 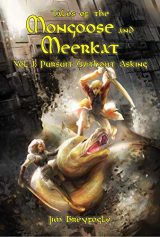 Alness has fallen, and the brash adventurer Mangos has teamed up with Kat, a rogue whose past is shrouded in mystery… Together, they are the Mongoose and Meerkat!

From the haunted battlefield of Keres to the ruin-strewn jungles of Terzol, they’ll take on any jobs they can get to keep themselves in coin and keep the wineskins full…and to stay alive!

This anthology collects the first five adventures of this breakout duo from the pages of Cirsova Magazine, fully illustrated for the first time ever. Plus this volume contains the bonus adventure: Deathwater! 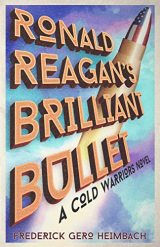 It’s Ronald Reagan in a jet pack! The author of The Devil’s Dictum returns with another novel that shreds the history books. The setting is the Cold War and Ronald Reagan has a shiny new toy to play with: a rocket powered suit. He’ll need it to battle the terrifying monstrosity Leonid Brezhnev is building on a secret base in Siberia.

Standing with Reagan are Margaret Thatcher and Billy Graham, each wielding super powers. (If Thatcher in an eye patch won’t turn you on, nothing will.)

Reagan insists on piloting the rocket himself—but the hardware is experimental and just might kill him. Threats are everywhere: a treacherous Congressman, a wide-eyed nun from the Tudor era, an enigmatic boy genius called R2, talking heads on Mount Rushmore, punks in back alleys and missiles in the skies. All while signs of a literal Armageddon unfold before Reagan’s steely eyes. 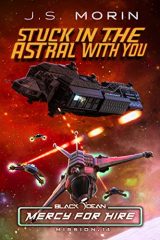 It may not be healthy, or particularly tasty, but it’s reasonably affordable and Earthlings LOVE it!

Tanny and Esper’s rebel syndicate needs to hit the Ruckers hard and where it hurts: in the finances. They decide on a target, one that most of the galaxy is blissfully unaware is owned by a vicious criminal gang: Friendli Foods. Purveyors of the Milky Way’s favorite junk foods, they make shipments to Earth on a megafreighter large enough to feed billions. Tanny has a plan to hijack it.

Meanwhile, Esper embarks on a mission to ensure that the rebels aren’t blamed for the hijacking. They need a patsy, and what better way to set one up than to replace a mid-level lieutenant in the Rucker organization with a mole. It’ll be up to Esper to convince a bunch of hardened killers that she’s one of them—and to turn them against their own people.