This week’s roundup of the newest stories in science fiction features robot geneticists bringing humanity back from extinction, serendipitous discoveries, space-fairing demon hunters, and the return of The Four Horsemen Cycle’s Jim Cartwright–and his giant mech. 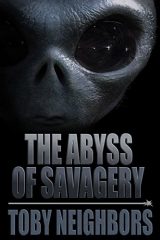 The Abyss of Savagery (The Wolfpack #5) – Toby Neighbors

The Amazing Conclusion To The Wolfpack Series

The humans have won their first victory against the Kroll empire, but it wasn’t without great cost and sacrifice. Captain Dean Blaze of the Wolfpack Recon Platoon has captured three Kroll vessels and will take them back to Earth as ordered, but what kind of reception will he find? Many people believe that humanity should turn a blind eye to the predatory Kroll, even sacrificing human held colonies in order to consolidate the strength of the Extra Solar Defense Force around Earth. There are rumors of power struggles, hints of mutiny, and threats on every side. If the human race is going to take the fight to their new enemy, it will be up to Captain Dean Blaze and the other officers who have fought the savage Kroll to convince the rest of EsDef that the time to act is now. 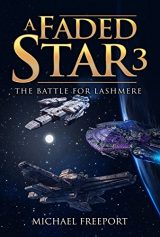 The Battle for Lashmere (A Faded Star #3) – Michael Freeport

A forgotten colony of humans live on a water world circling a tiny, faded star on the edge of the galaxy. With the aid of the mysteries of the origin tablet, they discover the true origins of their colony. These may be the last humans in the universe. Can they survive against their ancient enemy? Their only choice is to embrace an unknown past and fight with everything they have.

Admiral Stokes’ forces are scattered and beleaguered with no safe haven. The forces of the Woduur have decisively defeated the Lashmere Navy and invaded Lashmere itself. Humans are on the verge of defeat. Their only hope lies in the ancient ship, held by an alien race that may want them all dead.

“Action, adventure and aliens, what more do you want out of a classic science fiction story?” – Amazon Reader Review 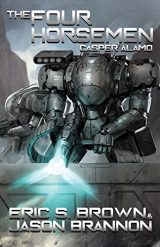 CASPers—Combat Assault Systems, Personal—are the lords of the future battlefield. The massive mechs were created to give humanity an edge against the rest of the mercenary forces in the Galactic Union.

Just like today’s tanks, though, massive amounts of armor and weaponry just make the CASPers “hard to kill,” not “invulnerable.” There are things in the galaxy even stronger than the CASPer, and when Humans run up against them, it’s up to the Human inside to figure out a way to snatch victory from the jaws of defeat.

CASPer Alamo includes two new stories by Eric S. Brown and Jason Brannon, loosely recreating the Battles of the Alamo and Isandlwana on a galactic scale. When all seems lost, it’s up to the mech operator to save the day! 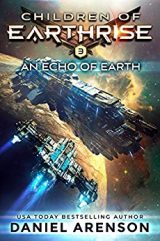 An Echo of Earth (Children of Earthrise #3) – Daniel Arenson

We are the last humans. We are hunted. We are refugees. We must return to Earth.

The alien scorpions attack us across the galaxy. They butcher millions. Humans are now an endangered species.

But we have not given up.

Earth is but an echo, calling from beyond the darkness. We will answer her call. We will find our lost world. We will defeat our enemies. We will rise again! 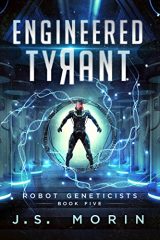 Those who learn history can doom others to repeat it.

A new generation of humans has entered adulthood. Raised by robots, these freshly minted citizens of Earth struggle to fit into a society that has gotten by without them for a thousand years. Until Alex Truman shows them a new path. Raised by Charlie7 and cloned from the original Charles Truman, Alex feels that it’s his right to rule mankind. With the entirety of human history as his guide, he learns from the successes and failures of the Human Era and puts them to use against a society that’s completely unprepared to oppose him. Who can stand up to this budding tyranny? Abby Fourteen asks that very same question and comes up with just one answer: her.

For fans of old-school science fiction where robots are people and any problem can be solved (or created) with enough scientists. If you’ve ever wondered what the world would be like if scientists who’d read I, Robot created a race of robots, or if you ever wondered what might be more dangerous to clone than dinosaurs, this is the series for you. 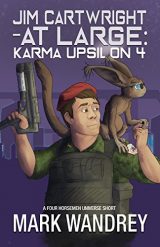 Jim Cartwright is commander of Cartwright’s Cavaliers, one of Earth’s storied Four Horsemen mercenary companies. He’s not your typical merc commander. He’s overweight and, at 20 years old, he’s the youngest person to ever take the reins. After a series of successful contracts, though, Jim’s brought the Cavaliers back from the brink of financial ruin.

Having discovered a functioning Raknar—a 20,000-year-old, 100-foot-tall war machine left from another era—Jim was able to use it to win a decisive battle. But now Jim wants more. Lots more.

He knows there must be more Raknar out in the galaxy, and he’s determined to find them. Follow along with Jim and his partner, Splunk, a member of the enigmatic race known as Fae, as they search the galaxy for more Raknar. Before it’s too late 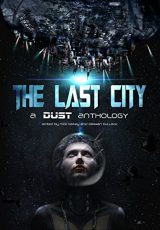 The Last City: a Dust Anthology – presented by Dust Publishing

Twelve outstanding authors come together to bring life to The Last City, a shared-universe anthology from Dust Publishing.

The City, built upon an asteroid, is the last stronghold of humanity in a star system ravaged by a long-ago war. Now, centuries after the apocalyptic conflict, the City thrives — a utopia for the rich, built on the labours of the poor.

From the home of five million souls come twelve stories of adventure, love and loss. Take a leap with Tinashe Arcaid, super-rich brat who thinks adventure is a trip to the dangerous lower levels; crawl through tunnels with Chthenia, a child ‘apprenticed’ to a scavenger who dwells deep beneath the City; or have a drink with Sam Nero, private investigator, dealing with gangsters on the mean streets.

Life in the City can be harsh, but the alternatives are far worse. 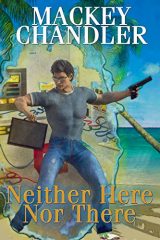 Neither Here nor There – Mackey Chandler

So many scientific discoveries have been serendipity rather than a goal to which someone worked as a logical progression. Instead, it was a spill or a misplaced item.

An ingredient measured out in error or from the wrong bottle. Often, a mistake over which someone was bright enough or curious enough to say: “Oops, but that’s interesting, isn’t it?” Uranium ore left next to photo plates, adhesive that wasn’t as permanent as hoped for, but still usefully tacky, or foreign growths in a Petri dish acting strangely…

A major revelation could be a blessing indeed, or if it was big enough to be a life changing development, one might have a tiger by the tail. Wouldn’t that be interesting? 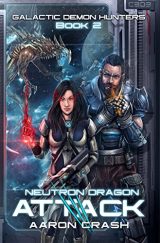 Hell-spawned dragons, a haunted planet, and an unstoppable ancient evil…

After defeating the archduke of necrotechnology, Blaze Ramirez and the crew of the Lizzie Borden are still on the run, wanted dead or alive by the Interstellar Presidential Corporation. Despite their problems with the law, the demon hunters have never been closer to destroying the Onyx Gate and freeing the universe from its evil.

However, the one person in the galaxy who might know the location of the gate is trapped on a haunted planet, doomed to die as its two stars collide. And standing between Blaze and his mysterious quarry is an army of the walking dead, vicious specters, and a clan of psychotic clown-worshipping cannibals. A galactic demon hunter’s job is never done. 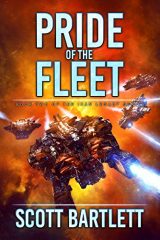 Pride of the Fleet (The Ixian Legacy #2) – Scott Bartlett

The Galaxy’s Never Had It Darker.

Armed with new tech that could revolutionize space combat, Captain Husher must now try to convince the Interstellar Union to implement it in time to defend against the godlike Progenitors.

When a new alien ally shows up in the galaxy, it’s a mixed blessing. Their military might could prove a boon to the war effort, but what secrets lurk in their past, and how might they shape galactic society for centuries to come?

It’s a lot for one supercarrier captain to contend with, especially when tensions are escalating aboard the IGS Vesta herself.

Husher can only stand on his well-worn principles:

If death comes anyway, make it an honorable one, and make it count. 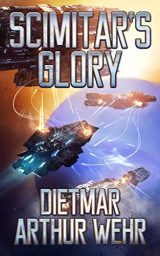 Human-explored space lies between two alien races, the Tong (definitely hostile) and the Jabs, who might be. The Treaty Organization Space Force (TOSF) is feverishly trying to build up a big enough force to defend against the Tongs while keeping an eye on the Jabs..

7th Fleet discovers that one of those races is moving to attack. In a moment of panic, the commanding admiral orders the fleet to attempt a risky jump through hyperspace. They miss hitting their target star’s gravity well and end up deep in unexplored space with a shockingly long trip home and not nearly enough food to last that long. With war now raging in their home systems, the officers of 7th Fleet must find a way to put aside their egos, ambitions and fears in order to make it back, and they know that not all of them will. 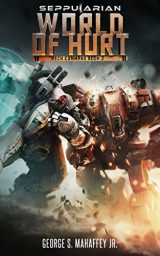 Time to take out the galactic trash.

Danny came, he competed, and he conquered.

Now a member of the Icarus Project’s elite mech operations team, Danny is tossed out of the frying pan and into the fire in WORLD OF HURT: MECH COMMAND BOOK 2.

Not only does he battle bands of rogue aliens and ginormous extraterrestrial fighting mechs in the desert and out on the ice, but he also uncovers evidence that forces him to question everything he thought he knew about the man who brought him into the shadowy Icarus Project, former billionaire technologist Jonas Xavier Vidmark.

Oh, and if that wasn’t enough, Danny also finds himself snared in a love triangle, while discovering that another alien invasion is likely just around the corner. 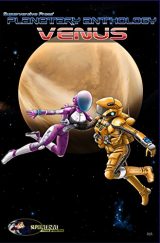 Venus, the second planet from the sun, a world of sulfurous gas and tremendous temperatures where the landscape features—mountains and valleys—are all named for love goddesses. Venus herself is the goddess most known for allure and romance.

Here are twenty stories featuring Venus, the planet, the goddess, or just plain love—both romantic and otherwise. Planetary Fiction explores the themes associated with these heavenly bodies as well as their astronomical, mythological, and in some cases even alchemical significance.