Shanghaied veterans, stranded bootleggers, bounty hunters, and the birth of the Legion feature in this week’s newest science fiction releases. 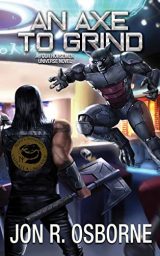 The Omega War may have ended, but neither Earth nor the galaxy are at peace. Bjorn Tovesson III, commander of Bjorn’s Berserkers has returned to Earth. Bear Town is a smoldering ruin, and the Berserkers’ reputation is in the gutter. As Bjorn tries to chart a course for the Berserkers’ future, ghosts from the past haunt him.

Meanwhile, the Information Guild and the Union Credit Exchange clash over the future of the Galactic Union’s economy. The Information Guild seeks to eliminate the red diamond standard, giving it sole control of the currency system, but the Union Credit Exchange harbors ambitions to become a guild in its own right. Both sides wage battle by weaponizing politics, piracy, and disinformation.

While Bjorn hunts the aliens responsible for murdering his father and slaughtering many of the Berserkers trapped on Earth during Peepo’s invasion, he receives an offer too good to pass up. Despite the Mercenary Guild suspending contracts, Bjorn could make the credits needed to bring his plans to fruition.

Can Bjorn put aside the past? Who will control the galaxy’s economy? The Omega War may be over, but everyone still has an axe to grind. 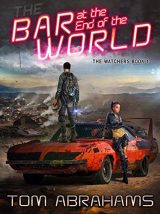 A starving city. A renegade bootlegger. A battle for the future of mankind.

Zeke is a bad guy. He didn’t choose to be. It’s just who he is. It’s who he has to be to survive in a post-apocalyptic world where trust is as scarce as water.

He’s got nobody. No family. No friends. And he left behind the woman he loved for her own good.

But it’s time to change. After a brush with death far out in the wasteland, he decides he’s done risking his life to help his greedy bosses control who gets to drink water and when.

Now, he’s stranded in a bar in the middle of nowhere, surrounded by the perfect kind of ruffians who can help him go back and make things right. Armed with renewed purpose and a one-of-a-kind muscle car, Zeke hunts for redemption, seeks retribution and, maybe, just maybe, he can get his girl back while he’s at it. 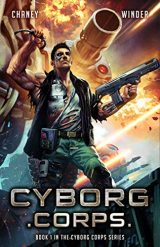 Warren Prescott is a veteran amputee who can’t catch a break.

When the VA calls him in for an experimental procedure to restore his leg, Warren is amazed. Finally. he will be able to feel the warm sand beneath his feet again, or so the doctor promises.

Lying on a table, Warren is told by the doctor that everything is going to be okay. He’s going to have a brand new leg…and a much better life.

Too bad it was all a lie.

The next time Warren opens his eyes, four centuries have passed. Somehow, he’s standing in the middle of a battlefield, stuck on a distant alien planet, far away from home.

To make matters worse, his body appears to be entirely synthetic. He’s a cyborg, nearly indestructible and enhanced for extreme combat.

Now, with centuries of time missing from his memory and no idea how to get home, Warren is left with no choice but to fight against those who would see him enslaved… and free as many of his brothers as possible along the way. 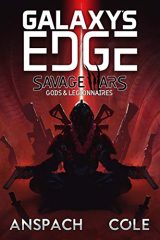 The Coalition is reeling. New Vega and its other worlds have fallen beneath the boot of the newly allied Savage marines, and the death count continues to rise at a staggering rate. One thing is clear: the war to come will be a fight for the very survival of the species. For both sides in this conflict, now is the time to become what fate, and victory, demand.

The Savages—post-human monsters who believe themselves to be gods—are intent on remaking civilization in their own violent and pathological image. Yet their alliance is tenuous. Among the many tribes of the Uplifted, as they call themselves, the struggle for supremacy rages on. All know that in the end there can be only one tribe. One leader. One truth.

Meanwhile humanity’s last, desperate hope is the formation of a new kind of fighting force: The Legion. Those select few who are hardy enough—or foolish enough—to undertake the relentless, grueling, and merciless candidate training will have the chance to be transformed into mythical heroes… or die trying. They will be pushed beyond their physical and mental limits as they seek to survive an unforgiving planet, lost and derelict ghost spaceships, and worst of all, the cold, unflinching brutality of Tyrus Rechs. At the end of this crucible, only the one percent of the one percent will earn the right to be called… 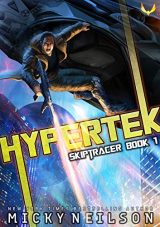 Blake Harley is a Skiptracer—a kind of bounty hunter—on the faraway construct-world of Concourse Prime. Hired by a corporate client to secure an overdue product, he’ll make some quick cryp and be on to the next job. Easy.

Except, this job is anything but simple. The product is tied to the immensely powerful and ultra-secret Hypertek, leaving Blake with a choice: be a good soldier, or refuse to help MagnaCorp become the most powerful entity in the system.

Another problem: everyone else in Concourse Prime is gunning for the product as well, from the demi-humans ruling its seedy underbelly to the CEOs inhabiting its gleaming superscrapers—people far more sinister than Hypertek.

Blake fights to survive while he wrestles with his decision. In the end, it’s just one big threat that could plunge humanity into an all-out interstellar conflict. What’s the big deal? 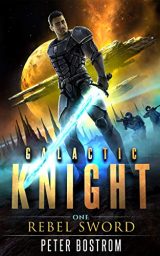 Private Lucas Walker never thought he’d be a hero. As a grunt in United Federation of Sol’s peacekeeper force deployed to Pluto’s tiny moon Nyx, the furthest barren hellhole in the solar system, he thought his career was all but over even before it began. He day-dreams of lightsabers, vampires, battlecats, wizards, and all things sci-fi and fantasy while he repairs sand-clogged equipment and mops floors.

A spatial-temporal vortex opens on Pluto, and out pours an army. A deadly force intent on capturing Earth and enslaving humanity in its quest for universal domination. All universes, all galaxies, all planets–all will kneel and submit to The Dominion.

The crap has hit the fan. UFS marines are overwhelmed. The odds look grim. Humanity teeters on the edge. The future of civilization now depends on Private Walker and his ragtag band of misfit UFS peacekeepers, armed only with weapons stolen from the enemy. He needs to figure this hero thing out fast, or all is lost. 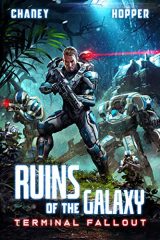 A dying planet’s citizens cry out for rescue, but no one can save them all.

With the Galactic Republic in Ruins, and Capriana Prime uninhabitable after Moldark’s assault, Magnus and his team are left to pick up the pieces. Hundreds of thousands of refugees need to be evacuated before time runs out.

But the Gladio Umbra aren’t without their own problems.

In desperate need of rest, Colonel Caldwell arranges for the gladias to take refuge on a neutral planet. But Moldark’s defeat prompts several key team members to reassess their roles and make decisions that will dramatically shape the Gladio Umbra’s future.

Meanwhile, lingering questions remain about Master So-Elku as he amasses strength on Worru. Magnus is forced to decide what can be done to stop the Luma leader and his relentless quest for power.

That is, if Magnus can keep his team together. 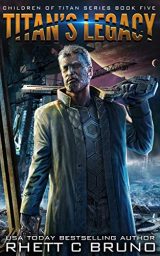 Ten years have passed since the end of the Titan Conflict. Now, the Titanborn stand on their own. And even though the war might be over, tensions between them and Earth have never been higher.

Malcolm Graves has spent the last decade living on Titan, the last place he’d ever expected to retire. But he’d made a vow to his daughter: protect her son Alann until his dying breath.

But when an old rival on Earth makes a threat against Alann’s claim as heir to the throne of Titan, it’s time to dust off the old pulse pistol and silence him. One problem. After he sets off to return to Earth for one last time, he awakens from cryo to find a stowaway. Desperate to see the worlds beyond Titan after spending his young, privileged life sequestered there, Alann had snuck aboard.

Together, they’ll have to survive the perils of Earth as enemies old and new gun for the future King of Titan. One wrong move, and it’ll be war again. A war that, this time, humanity may not survive.