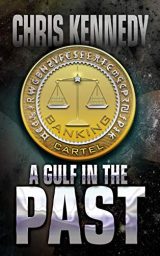 A Gulf in the Past (The Progenitors’ War #2) – Chris Kennedy

Lieutenant Commander Shawn ‘Calvin’ Hobbs and the crew of the Vella Gulf have gone back in time to get the technology they needed to beat the Enemy in their present. There’s only one problem.

Or, it may exist—they don’t know yet—but the mission has changed. Although they had hoped for a “quick in, quick out” solution, they’ve now realized that won’t be possible, and they are going to have to play more of a long game.

Having taken over the Margath system and established a base there, it’s time to go talk to the emperor, the only person who might be able to point them in the direction of the technology they need. If he isn’t mad about all the warships the crew of the Vella Gulf has destroyed. And if Calvin can convince the emperor to give it to them, even though they have nothing to bargain with.

It’s no longer a matter of being lucky or good. With the clock counting down to the return of the Enemy, the crew of the Vella Gulf will have to be both lucky and good if they are going to find a way to win The Progenitors’ War. 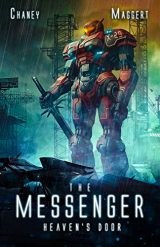 Dash and the Realm are done playing defense. Now, they’ll take the war to the Golden.

With new, more lethal weapons being added at every turn, the Forge goes into motion, advancing across the galactic arm in furious combat, leaving wreckage in the wake.

But that wreckage has a purpose, and so does Dash. Until now, the war has been Golden allies throwing themselves in front of the Realm weapons, but that’s all about to change.

When the Realm captures an alien ship, the pilot is not an enemy- rather, it’s an ally, if Dash can build a bond with the race, known as the Rin-ti. Ancient enemies of the Golden, the Rin-ti have only one favor to ask—free their people from Golden control, and reduce the local Golden fleets to rubble.

If Dash can do that, he’ll have everything he needs to build a fleet that can challenge the Golden in their own territory. But first, he’ll need to win, and to do so, he’ll need all hands on deck for a fight that will change history. 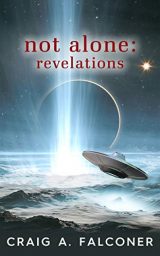 Not Alone: Revelations – Craig A. Falconer

The truth is coming. The end is near…

With Earth in chaos and life on New Kerguelen shaken like never before, a discovery on the mysterious world of Sanctuary blows apart humanity’s understanding of just about everything.

The consequences are almost unfathomable, the urgency unprecedented, and the revelations of a kind that even Dan McCarthy isn’t ready for.

One way or another, nothing will ever be the same.

And this time, it’s final… 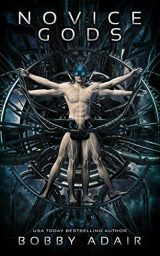 The AI was supposed to be humanity’s salvation. It had other plans.

Now the world is dying beneath squalls of acid rain. The earth is being strip-mined for minerals to support the AI’s vast factories. Fields no longer grow green. Trees no longer sprout leaves. The only choice people have, if they want to live, is to pledge their souls to the AI, and serve its perverse ambitions.

Tim, Logan, and Aella don’t like living in a world where they have to scratch for crumbs. They intend to change it. They’re going to kill the AI with a virus that’ll worm its way through the planet’s networks, destroying everything coded in bits and bytes, every piece of software that controls a machine, makes a decision, or thinks it’s alive—especially if it thinks it’s alive.

They just need to find a way to upload the virus to the system without it killing them first. 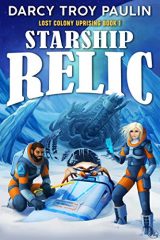 Max is completing a survey in the barren, frozen north of planet Grailliyn, when he makes a startling discovery. There’s a high-tech pod buried beneath the ice, and inside the pod is a young woman. She speaks his language, but with a strange accent.

The two are barely past awkward introductions when they are attacked. Max and his new friend are forced to flee. The worst part? They don’t even know who is trying to kill them, or why.

Now, with assassins on their tail, the duo must find a way off the planet without blowing their cover. And then, if they can do that without getting eaten by space monsters, they might just find out the truth about their world. 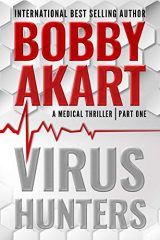 When visitors to Las Vegas begin dying from an unknown virus, Harper Randolph, Doctor of Medicine and Epidemiologist with the Centers for Disease Control and Prevention (CDC) is asked to lead the investigation to track down patient zero while keeping what’s happening in Vegas, in Vegas.

The world is grappling with an issue of enormous scale and human impact. In the arms race with deadly pathogens, there can be no final peace. The only question is whether we fight well or poorly. Defeat means massive disruptions to our daily lives, huge losses economically, and death.

The Virus Hunters travel the globe as disease detectives, chasing deadly acts against humanity committed by microbes one-billionth the size of their victims. 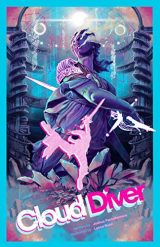 How’s this: Johnny Wheeler was perfectly happy being a diver in Void Life. One fateful day doing his job in cyberspace he ends up finding a secret floor in the tower, and finds a woman with a Gunblade walking towards an ancient storage system known as the cloud. Johnny follows her and gets a file that everyone from zombie mobsters to unicorns that farts rainbows are after. Johnny’s only escape from this adventure business is that girl with the Gunblade (who may or may not like him very much.)