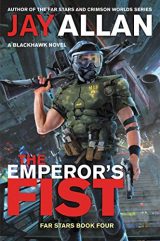 When the Far Stars came under imperial attack, Astra Lucerne—the daughter and successor of the Far Stars’ greatest conqueror—Marshal Augustin Lucerne—rallied her father’s confederation forces to defend their worlds. They were joined in the fight by former imperial general Arkarin Blackhawk, a warrior whose skills and brutality made him infamous, and who has, for two decades, sought the redemption he knows is unreachable.

Now, with the imperial foothold in the sector eliminated, the Far Stars is free and almost united. While Astra’s forces continue to depose local tyrants and warlords, Ark and his crew have slipped back into the shadows. Though his heart belongs to Astra, Ark cannot get too close. His imperial conditioning remains under control, but it is still volatile, and the temptation of power threatens to unleash the dark compulsions that made him the most merciless of the emperor’s servants. He cannot risk allowing Astra to see the darkness inside him.

But while the battle has been won, the war may not be over. A petty smuggler makes a discovery that can enable the emperor to strike back and crush the resistance—unless Ark and Astra join forces again to stop him. 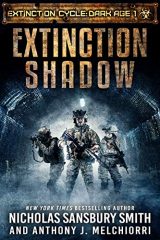 Survivors thought the extinction cycle had ended, but a powerful evil lurks in the shadows…

Eight years ago, an engineered virus ravaged the globe, infecting and transforming humans into apex predators called Variants. Billions died, civilization collapsed, and the human race teetered on the brink of extinction.

Nations banded together and heroes rose up to fight these abominations. On the front lines, Captain Reed Beckham and Master Sergeant Joe “Fitz” Fitzpatrick of Delta Force Team Ghost fought against the Variant hordes. With the aid of CDC Doctor Kate Lovato, they helped lead humanity to victory.

Now, almost a decade after the end of the war, civilization has slowly clawed toward recovery. In the Allied States of America, survivors live in outposts where they have rebuilt industry, agriculture, and infrastructure. The remaining Variants are believed to be dying off under destroyed cities and the abandoned frontier.

But evil and intelligent forces dwell in the shadows with the starving beasts, scheming to restart the extinction cycle and end humanity forever. And once again, Beckham, Fitz, and Kate will rise to fight them, joining forces with new heroes to try and save what’s left of the world. 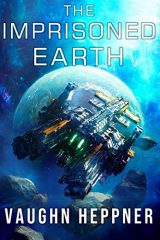 I had one job, keeping the super-genius Dr. Calidore alive on the Allan Corporation Voyager Manhattan.

The spaceship was run like a pirate vessel, part of a multi-corporation fleet racing to claim an alien asteroid vessel that had just appeared beyond the moon. None of us knew the Chin Corporation Voyager had nuclear-tipped torpedoes and planned to murder the lot of us. Well, no one knew but Calidore, and the little genius decided to skip out on a shuttle and take over the alien asteroid for himself.

He screwed up bad, so bad you wouldn’t believe me if I told you what happened. The point is, I have to fix the problem, me, Jason Bain the bodyguard, or the Earth can kiss its tush goodbye. 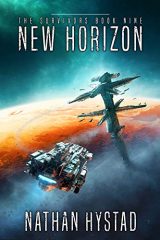 The first human exploration vessel has been manufactured. All it needs is a mission.

Horizon is a state-of-the-art vessel, a hybrid born of Keppe technology and human innovation. Magnus accepts the role of captain as the new ship is launched on its maiden voyage. Dean’s thrilled to take a back seat on the adventure, but things don’t ever work out as planned for our hero.

As Horizon heads into unknown space, they search for a way to reverse the miniaturization of an entire world in their possession. With recent attacks on Haven, the crew is on edge as they encounter a strange new space station, and witness one of the V-shaped invaders docked on arrival.

Join the newly formed crew of the flagship Horizon as they learn to work as a team and halt a looming invasion from happening on Haven. 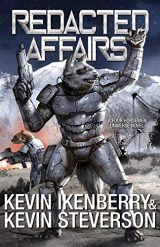 It is a time of upheaval throughout the Galactic Union. As the effects of the Omega War ripple outward, a Peacemaker falls silent at the outpost mining colony of Parmick. Sensing danger, the Peacemaker Guild dispatches two new graduates of the Academy to investigate and report. They are a new breed of Peacemaker, perfect for the clandestine infiltration mission.

With the galaxy teetering on the edge of chaos, can the Peacemakers and their surprising new allies liberate Parmick, stabilize the Galactic Union, and unlock the next clue to find Snowman? 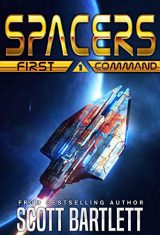 The day the aliens returned.

The memories are still fresh. Of colonies burning. Of millions dying in agony.

50 years later, we’ve built up our strength. Using a wormhole, we colonized both sides of the galaxy.

It was the worst mistake we could have made. Our enemy has returned and the wormhole has collapsed.

Commander Thatcher finds himself on the wrong side of the divide. Separated from his pregnant wife by countless light years.

He’s just been given command of a light armored cruiser. His first command.

If he ever wants to see his wife again, he’ll need to do the impossible. To defeat this enemy, he will need to reinvent space warfare.

So that’s just what he’s going to do. 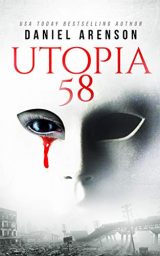 Imagine a perfect society. A world with no racism, sexism, or ageism. A utopia.

In Utopia 58, everyone is equal. Everyone must be equal.

Too beautiful? A mask will hide that pretty face. Too tall? We’ll saw your legs down to size. Too male or female? The surgeon’s knife will fix that. Too smart? A buzzer in your skull will drown out all that pesky thinking. You will be equal. Like it or not.

Utopia 58, built atop the ruins of North America, created perfect harmony. A society with no race, gender, or age. Pure equality.

KB209 was born into this utopia. He has no true name. No past. No future. He is one among millions. The same.

One day, at a propaganda rally, KB209 glimpses an act of startling defiance. A citizen with painted toenails. A woman in a genderless society. Color in a black and white world.

When KB209 confronts her, he is drawn into an underground rebellion. A movement that dares to dream. That dares to say: “We are unique. We are individuals. We will be free!” 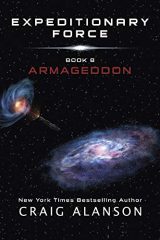 After the Renegade mission by the crew of the starship Flying Dutchman, the UN Expeditionary Force thought Earth was safe for hundreds of years, at least. After there was trouble on the Homefront, and the President had to authorize a nuclear strike on an American city. UNEF decided they did need the Merry Band of Pirates again. So, the Flying Dutchman is sent out on a simple recon mission. But for the Pirates, nothing is ever simple, and their mission will become Armageddon