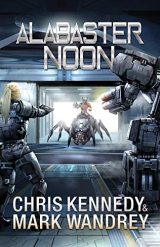 The invasion of Earth is a broken dream, a victim of Peepo’s ability to play the long game better than anyone thought possible.

With Alexis Cromwell shot in the back by her XO and the fleet in ruins, the Humans have run back to New Warsaw to lick their wounds, but the Merc Guild now knows the location of their hidden base, and they are in hot pursuit. Led by the New Era, a dreadnought built for the sole purpose of destroying humanity, they are an unstoppable force.

But the Golden Horde has been fortifying the system for a decade, though, and it won’t fall easily. The question, though, is whether the Humans can summon the will to defend it. With Alexis gone, the Winged Hussars are in turmoil, and their morale is at an all-time low. Humanity’s space fleet is in a shambles, and Sansar Enkh realizes her dream of being unable to stop the dreadnought is about to come true, despite her best efforts.

The final battle is at hand, with the survival of mankind at stake. The sun is at its zenith as the forces take the field—will the Humans crush the Merc Guild forces and take their place in a new hierarchy, or will the sun forever set on humanity? 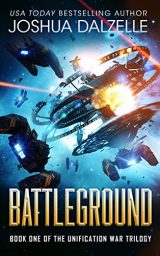 This war was inevitable.

After two brutal, bloody struggles for their very existence against implacable alien foes, humanity is victorious, but not at peace.

As distrust and accusations consume the political discourse between the two major factions, the Eastern Star Alliance military has already begun executing small raiding missions into United Terran Federation space. The Federation fleet, still reeling from the last war, is in no shape to try and protect its own borders.

Now, as diplomacy crumbles and tensions escalate, the ESA has moved into a Federation star system and declared it for themselves. Desperate, the Federation deploys a full task force commanded by Admiral Jackson Wolfe to try and defuse the situation, hoping his reputation forces calmer heads to prevail. Wolfe knows that even if he can stop the ESA here, the die has been cast. Humanity’s march to war with itself cannot be stopped. 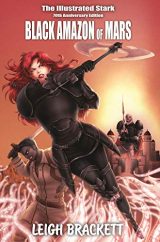 Danger Awaits in the Far North!

Long ago, an ancient evil was sealed away in the northern wastes of Mars by the legendary hero, Ban Cruach. A powerful talisman of Ban Cruach has been stolen–the thief’s dying wish is that it be returned by Eric John Stark to its rightful place in the City of Kushat which stands before the Gates of Death!

Before Stark can reach Kushat, he and the Talisman fall into the hands of a mysterious warlord named Ciaran, who prepares to lead a warband against Kushat and beyond. Undeterred by superstition, Ciaran seeks the power and riches that are said to lie beyond the Gates of Death and Ban Cruach’s eternal vigil!

Ciaran may bring destruction not only to the northern city states but all of Mars, if Kushat should fall and the Gates of Death be thrown open before his hordes! 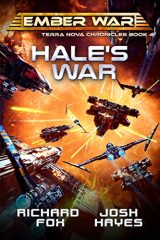 The Battle for Terra Nova rages!

The Triumvirate comes to conquer Terra Nova, landing an overwhelming assault by the surface by Netherguard and Ultari warships in orbit, laying siege to the human colony.

As the battle grinds on, Governor Ken Hale leads the defenders in a desperate battle for survival. Hoping beyond hope that help will arrive in time to save them.

Chief Kit Carson and her Pathfinders, with their new-found allies in tow, race home, praying they make it in time and that their efforts are enough to defeat Emperor Kyrios and his forces.

Hale’s War is the final installment in the Terra Nova Chronicles which takes readers on a wild ride or war, redemption, and salvation that culminates in this epic conclusion! 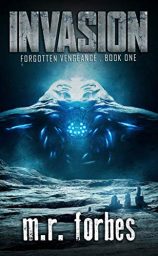 Some of us escaped… …most of us didn’t.

On Proxima they flourished – the invasion forgotten. On Earth we floundered – the horror began.

Their world is advanced, peaceful, and secure. Our world is broken, savage, and overrun.

A new invasion is coming. A hunger that has swallowed half the universe.

They don’t care which planet we live on. They want to end us all.

This time, vengeance will be ours. 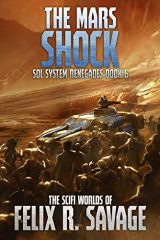 A ground war on Mars. No end in sight.

After the fall of Phobos, humanity’s life-or-death struggle against the PLAN has slowed to a bloody slog across the wastes of Mars. Slaughtering Martians is all in a day’s work for combat robot operator Jennifer Colden. But every kill takes a toll on her humanity.

A crisis erupts in the Olympus Mons sector …

As danger engulfs Earth’s troops, an NGO employee and a spy, stranded behind enemy lines, hike desperately towards safety. Colden’s team is dispatched to rescue the pair, striking deep into unknown territory.

The truth about the PLAN is exposed at last.

A grisly discovery at the foot of Olympus Mons shatters Colden’s expectations. She thought she was ready for anything. But is she ready for the most dangerous job on Mars: the role of protector.

The PLAN will not be complete until the last human dies. 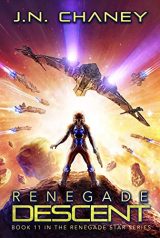 The Celestial War has arrived.

Captain Hughes and his team of rebels have created a shaky alliance with the same government that sought to end them, but even that might not be enough.

In order to combat the Celestial threat, Jace will need to convince the Sarkonian Emperor to not only join his cause but lend him the resources he needs to overpower the enemy.

The battle for tomorrow will take more than any single empire can manage.

Each side will have to learn to work together if they ever hope to overcome their shared enemy, but allies are not easily made from enemies, and not everyone will be as eager to stand side-by-side.

With allies like the Union and the Sarkonians, who needs enemies? 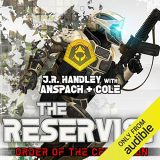 They promised him one weekend a month. The House or Reason swore the 9th would never leave their gentle homeworld. But after Kublar, things changed for Sergeant Fetch and the Caledonian Reserve Legion Corps. Thrown into a meat grinder conflict in a desperate bid to hold the line, it doesn’t matter whether you’re reserve or active, only that you kill and survive.

A searing tale of combat and honor at any price from a wounded veteran of the War in Iraq who fought to keep the MSRs open from Mosul to Tikrit.