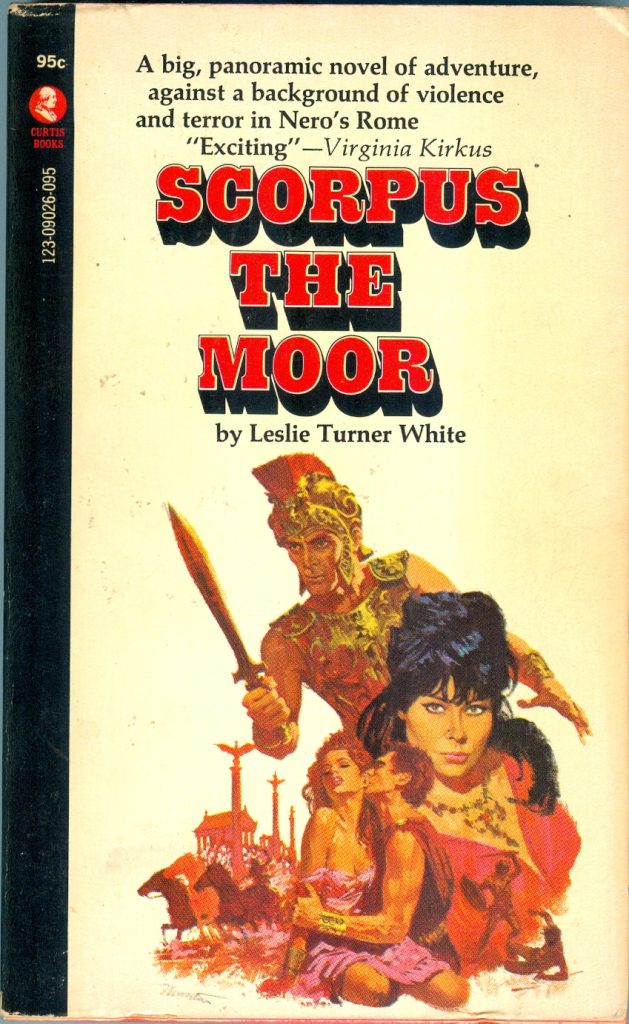 Leslie Turner White (1903-1967) started out writing for the pulp fiction magazines in 1930. He wrote mostly for the detective pulps in the 1930s, appeared in Argosy, Adventure, Short Stories, and Blue Book in the 1940s. He did manage to place a few stories in the slick magazines Collier’s, Saturday Evening Post, Liberty, and Country Gentleman.

He made the jump to historical novels, as that genre was ascendant as the pulps waned. Turner had a steady stream of historicals, many from the swashbuckling period of late 1500s to the 1700s. Rapiers and puffy shirts.

He did write a Crusader novel in the 1950s (Winged Sword) and the book that is the subject of this blog post, Scorpus the Moor.

Scorpus the Moor (Crest Books, 1962) is a Roman novel in the time of the Emperor Nero. Ahmed Ben Merouane is the son of a dealer in wild animals. His grand-father is a breeder of Arabian horses. Ahmed is to accompany a shipment of animals including lions and a team of horses to Rome.

I have some historical issues. I was not sure if White meant Ahmed to be a Berber or an Arab. It is mentioned that Carthage is not far off. Ahmed is an Arab name. The Arabs were not in North Africa until the mid-7th Century. If White meant Ahmed to be a Punic/Phoenician, he could have used a name like Mago, Gisco, or Carthalo. North Africa is noted for the Barb breed of horse. I don’t know if Arabian horses were present in North Africa but most likely the Moslems brought them in the 7th Century A.D. As I have written before, if you are going to write historical fiction, you better research it well.

A spoiled brat son of the Roman governor demands passage on the cargo ship going to Rome. There is an unbelievable scene where the governor’s son accidentally drops his father’s signet ring into the lion pit in the hold. He demands Ahmed retrieve the ring. The governor’s son falls into the lion pit attempting to wrestle Ahmed and dispatched by a well-placed lion bite to the skull. The lions get out and kill one of the Roman soldiers and crew. Ahmed escapes to the Roman coast.

One of the Roman soldiers lives and fingers Ahmed as the cause of death of the governor’s son. Ahmed is on the run with a series of adventures and misadventures in Rome. Samius, the organized crime boss of Rome captures Ahmed and plans on collecting a reward from the Roman governor of Carthage. While in captivity, Ahmed captures some fleas and creates a flea circus. He entertains first Samius’ criminal gang, then in taverns, and finally a performance for the Emperor Nero as Scorpus the Moor.

He manages to escape from Samius, saves the wife of a prominent Roman Senator, Domitius who happens to be in a runaway chariot with the team of his grandfather’s white Arabian horses.

Along the way, he buys a slave, Libba the Christian Jew and frees her. He meets St. Peter through her. Libba is later taken along with other Christians to be sacrificed at a week long series of games put on by Nero.

Ahmed races the team of horses in the chariot race and also comes up with a way to save Libba from leopards in the arena. St. Peter marries Ahmed and Libba before they escape from Italy.

I have mixed feelings about this novel. On one hand you have a veteran writer who knew who to grab your attention as the novel builds and ratchet up the suspense in the last 40 pages. The novel was not blood & thunder but did have moments of action. The chariot races were very well done. On the other hand, this is not a case of someone researching the period for years the way Lew Wallace did for Ben Hur. A few changes in names that were place and time appropriate would have satisfied me. Scorpus the Moor is a post-pulp version of Ben Hur and Quo Vadis. There used to be a type of novel of the country kid who finds himself in the big city meeting all sorts of characters along the way. This is a historical take of that plot.

If you come across Scorpus the Moor and are into Roman Principate novels or chariot races, pick it up. It is not on the level of Eagle in the Snow. I may pick up Winged Sword if I ever come across it as there are not many Crusader novels. Lord Johnnie appears to be White’s most famous novel as there was a hardback and at least three paperback printings.

Scorpus the Moor has a classic early 60s paperback cover. Puts the photoshopped static covers of today to shame.