Authors (Up & Down These Mean Streets): I’d moved to St. Paul, Minnesota from San Francisco and found a place on Summit Hill not many blocks away from Tierney’s rooms. Two years, 1975-76, hanging out with Dick and the weird fiction fan sub-group a.k.a. the MinnCon — Count Koblas, Joe West and others. Stopping in on Donald Wandrei — a bit farther off than Tierney, but not that far. We made a run up to see the Kensington Runestone (as fans of Robert E. Howard, neither of us had any problem believing Vikings might have made their way along epic waterways into the middle of Minnesota).

Science Fiction (Wasteland & Sky): Of course, there are two magazines we must mention before continuing on our quest. These were the last players of the Golden Age, both of which highlight the split that was finally occurring within the industry. One publication was the last true adventure magazine, the other was the first propaganda pamphlet. I am speaking of Planet Stories and Unknown magazines, two very different publications that started in the same year yet couldn’t have been more different.

Science Fiction (John C. Wright): Time travel, in order to be time travel properly so called, must allow the time traveler to change the past and to visit hence foreknow the future. The whole appeal, the whole point, of time travel is wish fulfillment. The one thing we humans cannot do, and can never do, is change the past and know the future. Such stories are speculations, or logic puzzles, about what might happen if we could. 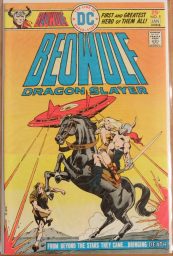 1975-January 1976) was, without doubt, the most Science Fictional of the six issues. Ancient swordsmen versus aliens from UFOs. As I mentioned before, John Jakes parodied the idea in his novel, Mention My Name in Atlantis (1972) with Conax the Barbarian. 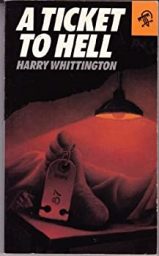 Crime Fiction (Bloody Spicy Books): “A Ticket to Hell” stars Ric who shows us his paperback-bruteness in the first chapter by kicking a punk out of his speeding bathtub Porsche. He’s a mysterious stranger who doesn’t fit in with all the fancy stuff that’s surrounding him, the swanky car, bag and motel that he’s hiding out in, waiting for a phone call and trying to keep a low-profile. The .35 Smith and Wesson automatic (yeah, despite the funky caliber a real gun, I looked it up) that is in his shoulder holster feels natural for him though. 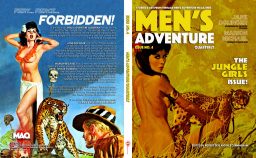 ADVENTURE QUARTERLY issue #4. It’s now available on Amazon worldwide, or direct from me via the bookstore linked to this blog or my eBay listings. The theme of MAQ #4 is “Jungle Girls.” It features vintage stories and artwork about fictional “Jungle Girl” characters and special in-depth sections about two real women who earned Jungle Girl titles: “Jungle Jane” Dolinger, the only woman who was both an adventure-travel writer for men’s magazines and a pinup photo model. 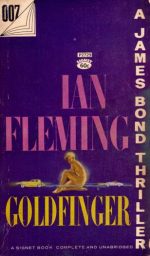 James Bond (Glorious Trash): So going into the novel I had low expectations, which turned out to be fortunate. Goldfinger wasn’t as subpar as Casino Royale, and it wasn’t as boring as Moonraker, but still it just seemed like an “off” installment of the series. In fact it pretty much confirmed my suspicion that if you are a bestselling author, you can get away with anything: Goldfinger trades on coincidence (lazy coincidence at that), features a protagonist whose mood changes with the pages, takes forever to build up to anything, and climaxes in a finale that is preposterous at best. 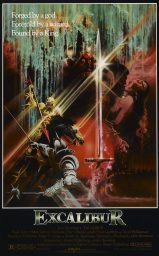 and still does have a great impact on me. In this brief essay I’d like to explain why. I write only on the basis of my own impressions. I have never listened to director John Boorman’s commentary; nor have I studied any other. This is Excalibur in the eye of the beholder.

Forthcoming (Too Much Horror Fiction): Coming 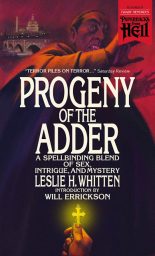 this summer, the 15th title in the Paperbacks from Hell reprint series published by Valancourt Books! Progeny of the Adder is a 1965 horror-thriller by Leslie H. Whitten (1928 – 2017), a Florida-born journalist who also wrote several genre novels. I first read this title over 10 years ago and reviewed it here, and mentioned it in my recommended reading afterward for PfH. I’m looking forward to rereading it so I can write the introduction.

Cinema (Kairos): It’s often said that the mark of a good parody is that you 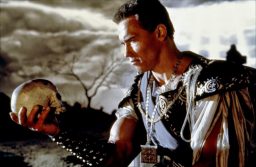 could take out all the jokes, and it would still play well as a straight genre film. The best parodies start with that ingredient and add a deep love for the source material. Arnold himself pinpoints Last Action Hero, the 1993 parody of his bread-and-butter action film genre as the start of his movie career’s decline.

The Amazon versions will be rolling out slowly over the next few months, but there’s no reason why you can’t just go ahead and buy the Lulu versions now!

Authors (DMR Books): Richard L. Tierney has died. One of the Sword-and- 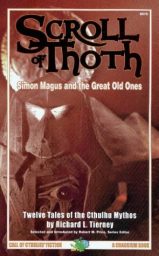 Sorcery legends. A Great Old One of our beloved sub-genre. I personally first encountered Richard Tierney by way of Zebra’s Tigers of the Sea, itself a reprint of the Donald M. Grant edition. That book contained all of Robert E. Howard’s Cormac Mac Art yarns, including an intro by RLT and two REH stories that he ‘completed’. 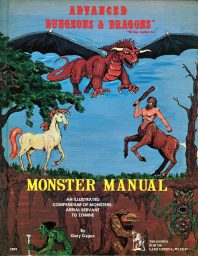 ): There’s one monster that is both iconic & served as my introduction into Advanced Dungeons & Dragons and no its not a dragon. Instead it was the Hydra one of the most underrated AD&D monsters ever. Hydras are not only dangerous but down right deadly.  One of the first AD&D games that I got involved with had to do with a particularly nasty dungeon in a stinking fen. The dungeon was partially submerged and we came up against a Hydra that was using the ruin as a base of operations to terrify the locals.

Edgar Rice Burroughs (M Porcius): Tarzan and the Jewels of Opar was first exposed to the public in 1916, as a five-part serial in All-Story Weekly 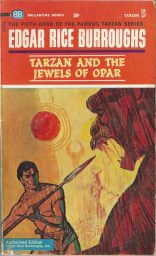 magazine, and of course has been reprinted many times in many forms.  Check out the commendably enthusiastic and charmingly amateurish cover illustration to the 1943 Romanian translation,  apparently published while the nations of the novel’s author and main character were at war with Romania, below. Belgian army officer Albert Werper has psychological problems.

RPG (Grognardia): In a comment to yesterday’s post about my ongoing House of Worms Empire of the Petal Throne campaign, I was asked why I balked at giving player characters’ access to spells like raise dead, when the game itself allows them? That’s a very good question and I’m glad it was asked, because it made me explore my feelings on the matter a bit more. In original Dungeons & Dragons, raise dead is a 5th-level cleric spell, the highest level of such spells available prior to the publication of Greyhawk.

Firearms (Field & Stream): The original Model 1895 was a scaled-up

version of an earlier rifle called the Model 1893, the invention of firearms designer Lewis L. Hepburn, who was not only a talented engineer, but a championship-level target shooter. Hepburn intended the 1895 to handle the big black-powder cartridges of the time, and while it was an excellent gun, noted for its accuracy, it had to play second fiddle to the Winchester levers, and in particular to the Winchester Model 1886. 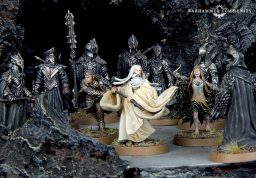 Games (Warhammer): Perhaps the most significant changes in this update are to the Vanquishers of the Necromancer Legendary Legion. The force represents the scene in which the White Council comes to Dol Guldur to rescue Gandalf from the clutches of the Necromancer.

Robert E. Howard (Voidpunk): What has kept generations of readers

puzzled was the sequence in which one should read Howard’s Conan stories. Many, like me, read them in the classic Lancer edition, originals or reprints, as edited by L. Sprague de Camp and Lin Carter. Now, while you can safely regard these paperbacks as “classics,” they were really terrible in several respects. First of all, the Lancer edition forced Howard’s stories into a pseudo-biographical sequence never intended by Howard. 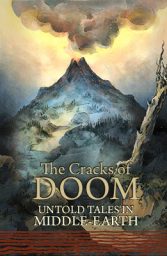 Tolkien (Spyders of Burslem): The Cracks of Doom: Untold Tales in Middle-earth. This new book is available now, and is a side-project from my larger scholarly Tolkien book. It should be of interest to RPG players, as well as to fan-writers of Tolkien stories. 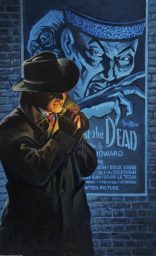 physically inside of all-American cities like San Francisco or New York, the Chinatowns of Black Mask and other publications are depicted as a liminal space wherein the rules of the cop-and-crook game do not apply. Robert E. Howard, who disdained the detective fiction genre, nevertheless crafted his own Chinatown stories and his own fictional crime fighter.

Art (With Both Hands): Compare the inevitable weirdness of fantasy and sci-fi art from the 70s and 80s to the boring, digital sameness of today, a difference not necessarily due to lack of skill (many artists back then were clearly amateurs) but shrinking and centralization of references, styles, and content to imitate and copy, as well as the obligation to submit to popular fictional products and mental references (e.g., a fantasy barbarian has to look like fantasy barbarian.

RPG (Jon Mollison): Late last year I finally got around to ordering a couple 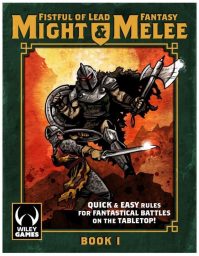 of titles from the Wiley Games lineup. Having missed out on the hardback omnibus fantasy project, and curious about how Jay Wiley handles procedural, by which I mean random table generated, dungeon generation, my first foray was always going to be in the fantasy genre. 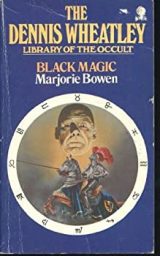 Fiction (Fantasy Literature): It was fairly simple for me to decide where to go next, as Marjorie Bowen’s renowned novel Black Magic (fittingly, Volume 13 in the series) is a book I’ve wanted to experience ever since reading a very laudatory review of it in Cawthorn & Moorcock’s Fantasy: The 100 Best Books. And it would seem that I did indeed choose well, as Black Magic has turned out to be, surprisingly, nothing less than my favorite read of 2021.