Tolkien (The Guardian): A previously unpublished collection of writings by JRR Tolkien, exploring the world of Middle-earth in essays tackling topics ranging from Elvish reincarnation to which characters had beards, is to be published next summer. The new collection, which is authorised by the Tolkien estate, will be called The Nature of Middle-earth, and will be published in June by HarperCollins, which promised it would “transport readers back to the world of The Silmarillion, Unfinished Tales and The Lord of the Rings”.

Fiction (Marzaat): Victoria The idea of a Second American Civil War interests me in terms of fiction. (It really doesn’t matter if it interests me in person. As Leon Trotsky said, “You might not be interested in war, but it’s very interested in you.”) What was once an idea only discussed on the fringes of American politics and society gets increasingly mentioned by both sides of the political spectrum. State secession is openly discussed.

Cinema (The Action Elite): When you interact with a potential new partner on a dating platform, you can spend time building a rapport. Or you could suggest meeting up sooner rather than later. If you do decide there’s already enough chemistry for a get-together, how about enjoying a movie together? Even better, an action movie, crammed with exciting adventure and vibrant characters? Here are six of the most recommended features you could choose from according to internal poll that was conducted by https://www.100datingsites.ca review service.

Magazines (Goodman Games): Due to a paper shortage, print copies of

issue #5 of Tales From The Magician’s Skull are delayed until mid-December. In the interest of full transparency, we present the following intra-office memorandums which recently circulated in The Skull’s publication offices.

Forthcoming (DMR Books): In December we will release the first of two 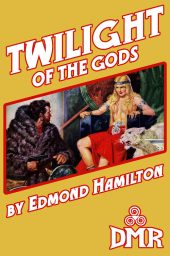 volumes of fantasy/sci-fi/adventure stories by Edmond Hamilton. Twilight of the Gods will contain eight stories which have rarely been reprinted, and in some cases, not at all. All the tales in this collection were inspired by various mythologies of the world, such as those of the Celts (“The Shining Land” and “Lost Elysium”), the Greeks (“Priestess of the Labyrinth”), and, obviously, the Norse (“The Daughter of Thor” and the title story).

Fantasy (Dr. Rinaldi’s Horror Cabinet): The first time we meet Dakeyras, the Waylander – the killer, slayer, assassin he has just stepped from the shadows to face five men who have stolen his horse. These five men will die, and the man of shadows will be faced by another predicament, a priest of the Source. Is this an encounter of chance or destiny? What are chance and destiny in such a world of death and destruction? The man himself, this Waylander, whose history is one of vengeance, revenge, and assassination lives in a world of shadows where no one and nothing is trusted, a man alone, unconquered, and yet outside the social nexus of the common world of men. Does the man have a soul? 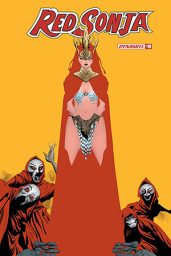 have championed Mark Russell’s run on Red Sonja from the start. While less than thrilled with the comedic undertones, I like the political intrigue and seeing Sonja in this light, as a fish out of water. She handled herself well, but over two arcs, it began to grow stale. I had hoped that perhaps a proposed “jumping-on point” might mean a fresh start and new direction. I was wrong.

Fiction (Medium.com): Back in April 2020, when I started planning and drafting my article on Black Fantasy writers, one of the first names I came across was Charles Robert Saunders — a former-journalist living in Halifax, Nova Scotia, and famed as the “Father of Sword and Soul”. Sword and Soul, as it turns out, is an offshoot of “Sword and Sorcery”, a genre of Fantasy coined by Fritz Lieber in the 1960s. “Sword and Sorcery” typically entails action-packed adventures in which mighty heroes travel distant lands, fighting various foes including brigands, sorcerers, witches and monster. 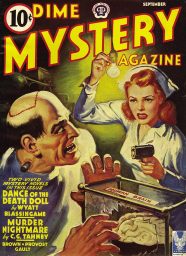 features a young couple who falls into the crimson clutches of cultists or other assorted groups of madmen. After a liberal application of bizarre murder methods, torture, and disfigured monstrosities, the story concludes with an attempt to wrap everything in a rational explanation and hand-wave away the supernatural. This usually required the writer to perform plot gymnastics or rely on outlandish inventions and science that were often less believable than demons and vampires.

Cinema (Talking Pulp): While The Thing takes the cake in the trilogy, Prince of Darkness and this movie are still damn good, incredibly fucked up and a lot of fun, especially for fans of John Carpenter’s more fantastical pictures. This story sees its protagonist try to uncover an “end of days” conspiracy, as he’s sent to go find a famous horror author but discovers that the writer’s written words are telling the true, current and still developing story about humanity’s fall to dark, sinister powers.

Gaming (European Gaming): New from Microgaming comes Tarzan® and the Jewels of Opar™, a high-energy five-reel, 20 payline video slot packed with thrilling features and punchy animation. This is the latest collaboration between Microgaming and Gameburger Studios, an independent developer of exclusive premium gaming content. Following a wildly successful two-week exclusivity period with select operators, the game is now live across the Microgaming network from Tuesday 20 October.

Burroughs’ fabled island and must use his legendary sword skills to defeat legions of man-eating dinosaurs.

Dashiell Hammett (Easily Distracted): Complete Continental Op 1. The Early Years 1: Arson Plus and Other Stories. All the Op. stories of Dashiell Hammett were published in 2016 in  eight chapbook-sized ebooks edited by Richard Layman and Julie Rivett in 2016. The stories are beautifully and patiently developed, modest in their ambit; they perfectly convey the vicissitudes and lightning flashes of waking life for petty-bourgeois professionals in the U.S. Professionals like the Op.

Fiction (Digital Bibliophilia): Despite what may have been published in the 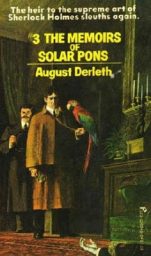 1970’s, the second collection of cases for Solar Pons was actually The Memoirs of Solar Pons. So in keeping with the republished and reformatted ebooks by Belanger Books I am following their sequence and downloaded the next chronological installement of the adventures of the most famous of Sherlock Holmes successors.

Games (Arkhaven Comics): “I dreamt of blood upon the shore, of eyes that spoke of sin. the lake was smooth and deep and black, as was her scented skin…” -Gabriel Knight Cliche: defined as “an expression, idea, or element of an artistic work which has become overused to the point of losing its original meaning or effect, even to the point of being trite or irritating, especially when at some earlier time it was considered meaningful or novel.” Dirty little secret of the writing business. Cliche is our bread and butter.  It serves a vitally important purpose. It lets the audience know everything they need to about something or someone without having to write an entire background chapter for each person you meet.

Knives (Last Stand on Zombie Island): Recently snagged these plastic cards as part of a T&E I am doing on Case knives. I have a few extra on hand to pass on to fans of folding knives. Just shoot me an email with your shipping address to egerwriter@gmail.com and I will drop one in the mail (no, this is not a plot to add you to a mailing list for anyone or send your info to an eagerly awaiting Nigerian prince.) For those of you who would rather just have the digital version, of course just click “save as” on the images.

Clark Ashton Smith (Christian Pop Culture): In March, Penguin Classics released a volume titled The Dark Eidolon and Other Fantasies, a collection of fiction and poetry by the writer Clark Ashton Smith. This publication represents a milestone to Smith fans and scholars (like me), because it signifies a move toward greater acknowledgment of his role in shaping the genres of fantasy, science fiction, and horror. As of now, relatively few people may know of Clark Ashton Smith, but he deserves wider recognition as a poetry and prose stylist whose works demonstrate the capacities of the human imagination.

Cinema (Talking Pulp): While I was never a massive fan of this Dracula adaptation, which I will get into, I’ve still always enjoyed it. It’s generally well acted and it looks incredible. I also have to say that it’s stood the test of time, as it doesn’t feel as dated as I thought it would and because many people still talk about it and refer to it as one of their favorite vampire films of all-time.

I think that Francis Ford Coppola did a good job in giving the famous novel some new life and helped to inject vampire movies back into the mainstream consciousness. However, it does fall short of the great 1994 Interview With A Vampire adaptation, as well as some of the other Dracula movies of the past.

Weird Tales (Dark Worlds Quarterly): The Terror Garden has specimens by Carl Jacobi (1908-1997). They illustrate how long and productive Jacobi’s career was. Dating from 1932 to 1985, this Weird Tales second-stringer wrote in most genres, with plant monsters in Science Fiction and Horror magazines. He started with killer plants then worked his way to more subtle kinds of evil then back to the lurid.