Firearms (Field & Stream): So revered was the 1911 that it remained the

issue sidearm of America’s armed forces for 74 years. In fact, even today, elite American combat operatives rely on 1911s. Designed by firearms genius John Browning, the Colt 1911 was chambered for the .45 ACP—a cartridge that’s now as esteemed as the pistol it was created for. To meet military demand during the first World War, 1911s would be built by many different manufacturers.

Games (Wert Zone): Is there much more we can ask from video games than

the ability to jump in a giant robot and use the giant robot to destroy other giant robots and occasionally just smash up a city for the sheer hell of it? It could be argued not, and, since 1989, the MechWarrior series of video games has satisfied that urge in a very enjoyable manner.

interchangeably in today’s knife world. This was not always case. Stiletto blades are traceable to 15th Century Italy. The dagger is and always has been a close range fighting weapon; not a general purpose tool used for day to day chores, processing food or setting up camp.

“Appendix N” which appeared in the Dungeon Masters Guide published in 1979—another author was hard at work compiling a list of fantasy stories to introduce to the reading public. This earlier catalog was the Ballantine Adult Fantasy Series. Edited by Lin Carter, an esteemed author of science fiction and fantasy in his own right, this literary series was comprised of more than sixty titles released between 1969 and 1974 by Ballantine Books.

D&D (Roles Rules): Happy 40th birthday, D&D! The world’s oldest fantasy adventure role-playing game?  Yes, but … most of the world doesn’t know about the role of science fantasy in the first eight or so years of your existence. The genre purges of the 80’s – serious fantasy only, please! – saw science-fantasy shaken out of successive D&D rule sets. But psionics, giant insects and blobs, and the crashed spaceships in both Arneson’s and Gygax’s games, are important sci-fi intrusions in the early game. 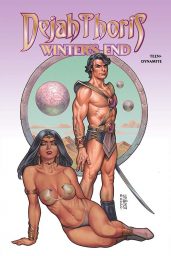 has saved her world from the catastrophic End Winter. Now she must help rebuild Barsoom to its former greatness! But certain factions see benefit in keeping Barsoom cold and dark. Dejah will need help, and she may find it in the return of her true love…JOHN CARTER! As she worries about the fate of her lover and son, others contemplate life and family too. 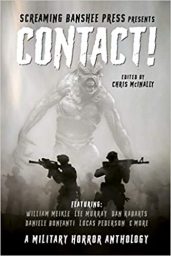 Fiction (Scifi and Fantasy Reviewer): I’m always on the lookout for new publishers in the Horror genre to see what they can bring to the table, and was therefore excited in 2020 to discover the intriguingly-named Screaming Banshee Press. They were kind enough to contact me to offer a review copy of their debut anthology, a zombie horror collection entitled Bloods, Brains & Bullets, and I eagerly dived into it. With some fantastic and evocative cover art by illustrator Matt James.

T.V. (Fantasy Literature): Viewers who tuned in to CBS at 10 PM on October 2, 1959, a Friday, to try out the brand-new show with the unusual title The Twilight Zone could have had little idea that the program they were about to watch would soon develop into one of the legendary glories of 1960s television. Today, of course, The Twilight Zone needs no introduction. For most of us — at least, for those of us younger than 65 years old — it is a show that has always been with us. 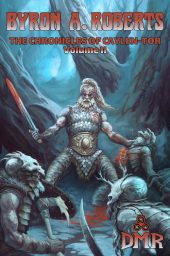 first collection of tales about his barbarian hero, Caylen-Tor. Now the release of the second volume draws nigh! The Chronicles of Caylen-Tor, Volume II contains four episodes from the adventurous warrior’s life. From the desolate deserts of a war-torn empire to the shadow-haunted forests of the northern clans, join the legendary Lord of Wolves as he pits his strength, his courage and his cold, hard steel against a legion of fearsome foes, ultimately facing the malefic avatars of the Elder Darkness at the ersatz heart of the Hollow Earth!

Tolkien (Matthew Rettino): In comparing these two figures (the visual similarities are themselves suggestive), I am in no way trying to slander John Dee or imply that he was a maniacal, power-crazed wizard. He was a humble, lonely man–as lonely as any man favoured of the Queen could possibly be, although his intellectual influence had enormous implications, not least with regard to the colonization of the New World. However, there are so many similarities between these two magicians that it cannot be easily ignored.

we read a novel and a short story by A. E. van Vogt I’d never read before.  Looking over the catalog of the Canadian madman’s prodigious body of work over at isfdb, a number of titles came to my attention that I have not read since this blog was brought forth upon this continent, conceived in error and dedicated to the dubious proposition that I should keep track of the fiction I read and record my opinions of it.  Let’s read three of them that first appeared in Astounding in the 1940s.

Comic Books (Comic Book Cave of Awesome): “The Coming of Skull the Slayer!” Writer: Marv Wolfman Artist: Steve Gan. Jim Scully is a pilot who is 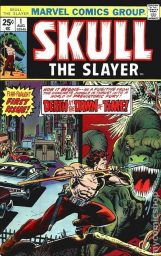 shot down in Vietnam. He spends five years being tortured as a P.O.W. Once free he returns home to find his wife divorced him and is now with another man. His parents are dead and his brother is a junkie. The brother blames Scully for their deaths and in his drugged state tries to knife him. Only he accidentally gets stabbed and Scully goes on the run. They finally catch him in Bermuda and put him on an government transport back to Miami.

D&D (Mystical Trash Heap): Alignment in D&D is one of those perennial (and perennially frustrating) topics of discussion, because everyone has their own ideas about what the words mean, and the definitions provided in the books are overly vague and generalized to the point of being essentially meaningless, so there’s a lot to argue about and for people to accuse each other of being both Wrong and possibly A Bad Person.

Fiction (Paperback Warrior): After their re-branding from Pyramid, the 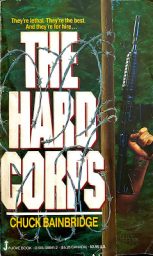 Jove publishing house experienced a retail bonanza in the mid-1980s. At the height of post-Vietnam War action films like Missing in Action and Platoon, Jove launched a plethora of hard-hitting, hi-octane team-commando series titles like M.I.A. Hunter and The Guardians as well as the novelizations for Rambo II and III. Another series title that Jove introduced to the market was The Hard Corps.

Cinema (Neotext Corp): Published in 2005, McCarthy’s novel is a greatly 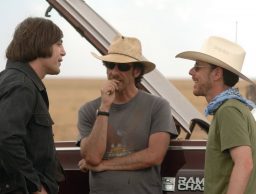 written story of an old sheriff trying to cope with the senseless evil he witnesses, and both the author and his audiences probably couldn’t have hoped for a better film adaptation that what the Coen brothers delivered two years later. When producer Scott Rudin bought the film rights and contacted Ethan and Joel Coen, they were just attempting to shoot an adaptation of James Dickey’s novel To the White Sea.