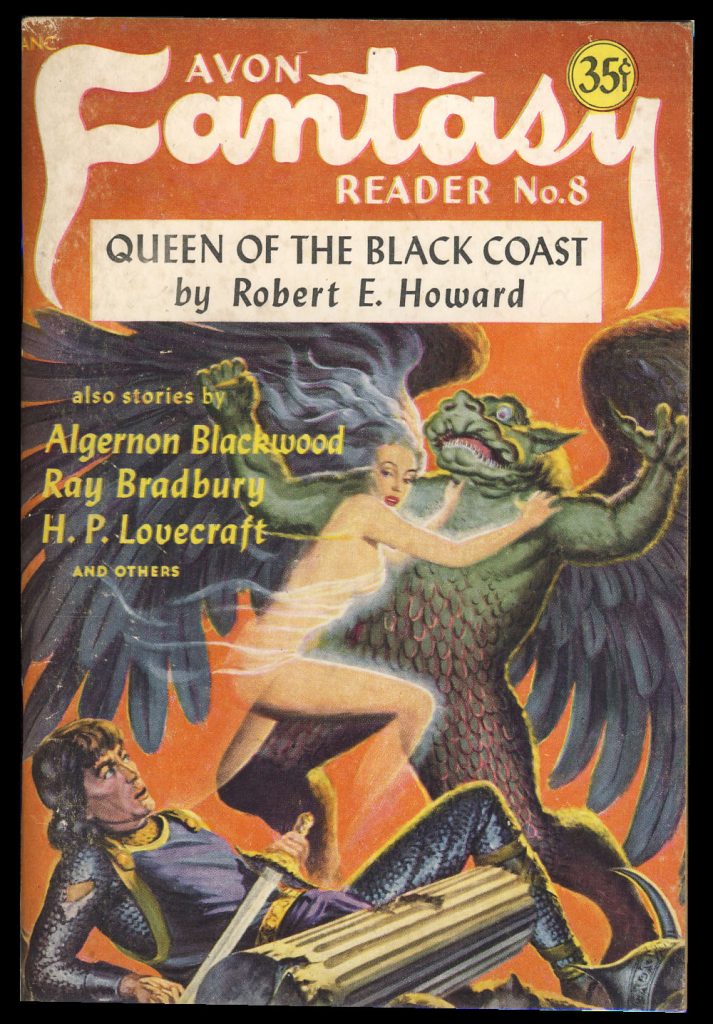 Appendix N (RMWC Reviews) Appendix N Review: The Ship of Ishtar — “There’s so much going on. Action, magic, ancient Babylonian gods, a superhumanly strong drummer named Gigi, a badass redheaded Persian warrior named Zubran, and a Viking named Sigurd who swears blood brotherhood to Kenton and Zubran. In true adventure fashion, the stakes keep raising and the action keeps ramping up. Kenton is a two-fisted kind of hero, quick to action when he makes his decisions. The romance between him and Sharane starts off rocky. She thinks he’s an agent of Nergal when he explains that centuries have passed in the outside world, so her handmaidens chase him out with spears. He then swears to avenge his pride by conquering the ship and then her.”

Pulp Revolution (Kairos) This Is Not Fine — “Like all postmoderns, novelty cultists vocally deny objective standards of beauty and craftsmanship while at the same time conflating their subjective preference for novelty with objective quality. Exploding their argument is as simple as refusing to let them frame the debate. The key isn’t to defend your preference for the classics. It’s to point out that older works are objectively superior to the creatively exhausted tripe that film, game, and comic book studios churn out these days.”

D&D (Gaming While Conservative) D&D5 – The Storyteller’s Dream — “The rules are set up to make it extraordinarily hard for characters to die. My third level sack of hit-points, a sword and board fighter, charged into every combat (both of them in four hours…sigh), triggered every trap, and generally jumped in the path of danger at every opportunity. My dude got burned, fell thirty feet, stabbed, sliced, diced, and poisoned, and managed to survive the night.”

Movies (Misha Burnette) Wonder Woman — “But despite the title, Diana is not a woman. Not a human female. She is a goddess, in the classical Greek sense of a personification of virtue, like a muse or the classical image of Lady Justice. She represents an ideal, the best that the human race can be, just, courageous, merciful, and strong. Gadot pulls off that character marvelously, combining innocence and wisdom. When she charges into battle you want to follow her, because she represents what we are meant to be, and what we are meant to do. The violence in Wonder Woman is purposeful violence, the strong rising up to defend the weak.”

Gaming (Injustice Gamer) Boardgame Trends: Complexity- At multiple levels — “Do most Euros avoid direct conflict? Absolutely, and in some cases, it is a flaw. Part of that stems from a reaction against player elimination, which is seen as bad. But I’ve also recently seen an increase in Euros with specific points of direct conflict. These are working balance points between solitaire style(pure non interaction) and pure war/elimination games, and I think they’re starting to get good results. And one of the best things with Euros is the way they balance at multiple player counts. Direct conflict games are much harder to manage in that respect.”

Appendix N (PC Bushi) Thoughts on the Broken Sword — “Tolkien popularized the image of elves as tall, graceful, honorable, and good. That’s not to say that elves have historically been villains only, but it certainly used to be a more common role for them and fey in general. But the Broken Sword is pre-Tolkien, and we get another look at elfin kind. When it comes down to troll versus elf, the latter comes out looking pretty good. They’re fair to look upon, often merry, and usually they don’t come across as especially cruel or sadistic. However they’re pagan beings – they cannot bear holy words or symbols, and they fear the White Christ. They perform unholy magics, such as being able to call upon the dead (though this is a rare and dark ritual). When they can get away with it, they steal human infants. They’re wanton both in bed and in battle.” 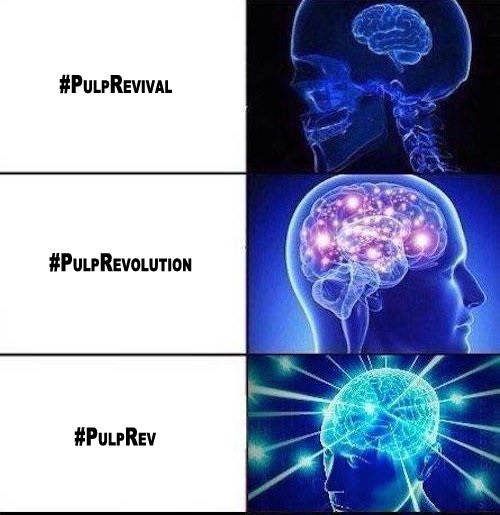 Pulp Revolution (Kairos) Elementary Storytelling — “Remember: a set of events can admit of multiple explanations. Your job as a writer is to present one plausible but false explanation while working from another explanation which alone fits all the facts. If you do it right, the second, true explanation will leave subtle traces throughout the narrative. This is how you avoid insufficiently foreshadowed deus ex machina solutions without tipping your hand. If done correctly, the reader will finish the book with the satisfaction that only comes from being pleasantly surprised yet at the same time being certain that events could not have gone any other way.”

Pulp Revolution (Odd Nugget) Steam-powered Prose from Jon Del Arroz — “The publishing industry is changing. Don’t wait and sit around for an agent to magically discover you and deem you worthy. That’s not how it works anymore. You have to be very well connected and perfectly in tune with producing generic content that’s already out there to come up in that world, and you also have to be in tune with their politics. It’s far too much a perfect alignment of the stars for it to realistically happen to many random folk, and the trick is it has nothing to do with the quality of your work either.”

Pulp Revolution (RMWC Reviews) The Three Pillars of ADVENTURE! — “These are deliberately broad terms that aren’t set in stone for me yet. After all, its entirely possible for a story to have all three pillars and still leave me flat, like James Cameron’s Avatar (it comes down to the execution of the material, but that’s an analysis for another time), and I think its entirely possible for a movie to be deficient in one or all of the categories and still be great. (The Producers is one of my favorite movies of all time and there’s very little ADVENTURE! to be had at all). Still, I think this is part of why there’s a sudden interest in the old pulp masters like Robert E. Howard and Leigh Brackett. Because those stories are filled to bursting with it.”

D&D (Gaming While Conservative) Death Becomes D&D — “Alas, even this crew of first edition D&D players have succumbed to the notion of protecting the characters to protect the story. They offer countless examples of ways they ‘kept the story going’ after a botched save. Or ways to save characters from a failed Save versus Death. You want to know how to keep the story going? You roll up a new character, that’s how. Bob died? Okay, Bob junior shows up, let’s go.”

Pulp Revolution (Yakov Merkin) Why the #PulpRevolution Will Win — “In the end, most readers want books that draw them in, are fun, make them excited, and yes, that have awesome covers. Most of us are still fairly small, in the grand scheme of the writing world, but as the mainstream books get worse and more preachy, they’ll come looking for fun, awesome books if they haven’t already found us. And we’ll be happily waiting. The revolution is underway, and I am confident that we will win. It’s just a matter of time.”

Pulp Revolution (The Last Redoubt) I Told You This Story So I Could Tell You The Next One — “By the time the book wrapped up, I realized that without the beginning, even if the initial revelations that triggered the events of the second half were pushed back, the book would not made sense. The characters needed that room to grow, developments needed to work in sequence, and room needed to be made to slip one piece of background thought in at a time to understand the how and why of the end without huge infodumps.” 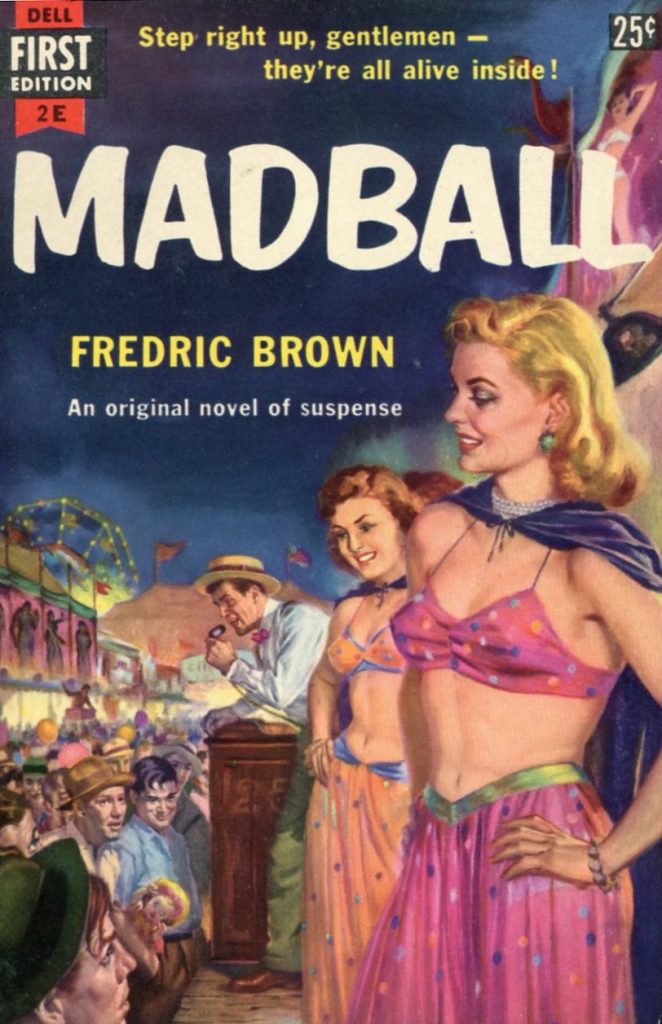 D&D (Save versus All Wands) FBI Unabomber Investigation Report on Gary Gygax: “[Redacted] considers GYGAX to be eccentric and frightening. He is known to carry a weapon…” — “Before presenting the document, let me say that in his short blog post, Reason reporter Ciaramella frames the situation misleadingly. He oddly does not reference the Unabomber case at all, and sort of implies that the FBI ‘kept a file on’ Gygax. This isn’t really true (as far as we know). And whatever one thinks of the FBI in general or the FBI in 1995 or whatever, I don’t think it unreasonable for the agency to have followed all possible leads in this notorious pre-9/11 terrorism investigation – including even, I suppose, checking out wargamers and roleplayers.”

Books (Vintage Novels) The Story of Rolf and the Viking Bow by Allen French — “Since finishing the story, I’ve been chewing on one particular aspect of it–just a minor aspect–that I think this book gets wonderfully right when it comes to the concept of forgiveness. It’s common to assume that forgiveness is something unconditional and unilateral. In fact, forgiveness cannot be accomplished without repentance on the side of the wrongdoer. It is the victim’s duty to be ready to offer forgiveness if it is sought, and that means killing anger and bitterness and resentment; but this does not mean treating a professed enemy in every respect as if he is your friend. One must be ready to forgive, but there is no true forgiveness possible for an unrepentant enemy. I won’t say more, but I will say that I was stunned and encouraged by how well (and beautifully) The Story of Rolf discusses this truth.”